This modifier enables you to apply a weighting to any modifier or modifiers. Think of it as an additional 'strength' control, but which enables you to change the strength depending on parameters such as particle age.

In a way this modifier was an early version of data mapping in X-Particles. It is still available but it is recommended that data mapping is used instead.

Please see the notes at the end of this page on using the Weight modifier before using it for the first time. 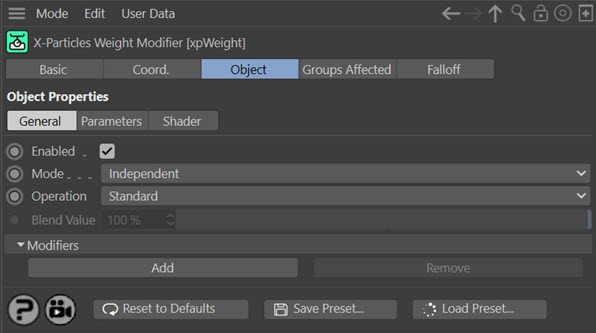 This drop-down menu has two entries:

This is the default and is the same as the original way of working with this modifier.

This new option alters the way the weight modifier works. Suppose you have two modifiers being weighted. You want to increase the weight for one but decrease it for the other. The only way to do this in the original version was to keyframe the 'Weight' parameter in both modifiers. This isn't too bad if there are only two, but if you had several to weight it could get tedious, especially when you have to adjust all the keyframes.

Blend mode gives you less control over the weights but is much easier to use. When you select this option, you can no longer change the individual weights for each modifier but you can choose to increase or decrease the weight as the 'Blend Value' changes. So now you only need to keyframe one parameter, not several.

The value to use if 'Operation' is set to 'Blend'.

This section is where you set which modifiers are to be influenced by the Weight modifier. To add a modifier, click the 'Add' button. This will show these fields:

You can add as many modifiers as you like and set the weight for each independently.

The modifier to be weighted by the Weight modifier. Drag the modifier into this link field.

The weight to be applied; this can be keyframed if desired. Note that this parameter is only available if 'Operation' is set to 'Standard'.

See 'Operation' and 'Blend Value' above for full details of this mode. Note that this parameter is only available if 'Operation' is set to 'Blend'. 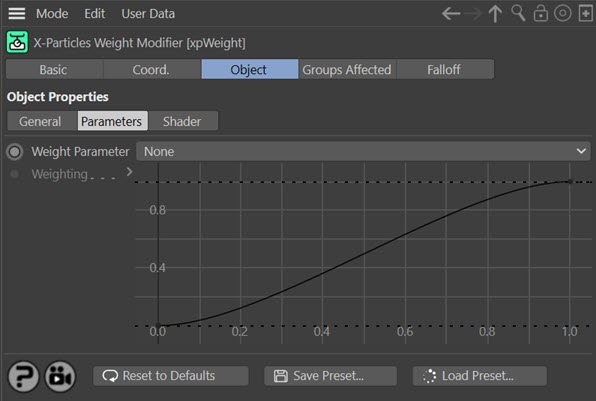 The default is 'None' which means that the spline control is unavailable and has no effect.

When you select this parameter, a drop-down list appears from which you can opt to use the red, green, or blue component of the colour, or its overall brightness. For example, if you choose 'Red' then particles with no red at all in their colour will take their weight value from the extreme left of the spline; those which are pure red will take the weight from the extreme right of the spline.

Note that the minimum and maximum values are important and you will need to adjust them appropriately depending on the parameter being tested.

The spline control used to affect the weight assigned to the modifier when the 'Weight Parameter' is anything other than 'None'. The value obtained is then combined with the Weight value for that modifier to produce the final weight used.

An optional shader can be added to this field. The shader is sampled and will be used to further influence the final weight. For example, a Noise shader can be used to provide a more random weight value.

Most modifiers can be weighted by the weight modifier, but there are some that can't - usually because a weight or strength has no meaning for that modifier. The four which cannot be used are the Follow Surface, Kill, and Python modifiers, and the Weight modifier itself (i.e. you cannot weight another Weight modifier).

In X-Particles the majority of modifiers affect parameters which can vary widely and can be changed by varying amounts, such as speed or particle radius. This kind of modifier works best in a Weight modifier; the effect of reduced weight will be to reduce the change carried out by the modifier.

Others, however, cause stepwise changes, such as the Geometry modifier when it changes the index of a generated object associated with a particle, or the Life modifier which either kills a particle or does not. This can't be weighted in the same way, but these modifiers usually test their falloff value against a random variable to decide whether to make the change or not. With these modifiers, reducing their weight will reduce the chance of whatever action they take actually occurring.