This modifier attracts particles to itself or to other objects. It can carry out user-specified actions when the particle approaches the target. 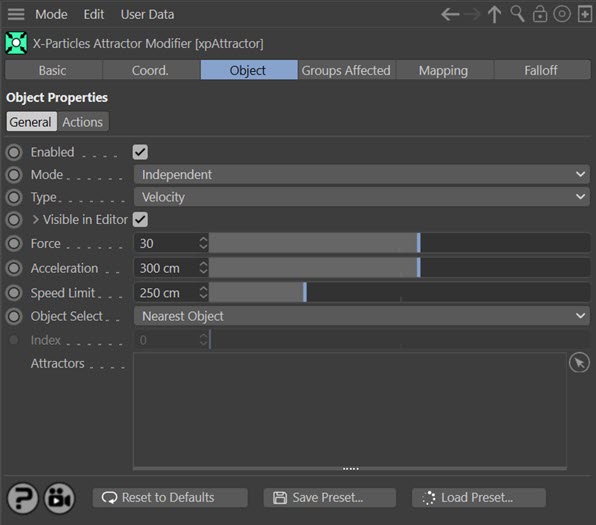 If this switch is checked, the Attractor will appear in the viewport like this: 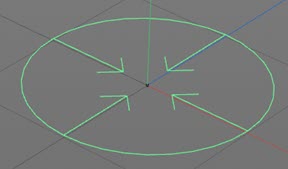 This gives you visual feedback to the point to which the particles are attracted. You can alter the size of the icon and the offset of the four points from the centre if desired.

If you click the little arrow next to the 'Visible in Editor' label, you see two parameters to control the look of the icon:

The radius of the circle. You can change this to whatever you need.

The offset of the four 'barbs' from the centre of the attractor. You can change this to move the barbs closer to, or away from, the centre.

This is the force applied to the particle to attract it to the modifier.

This will accelerate the particle as it moves towards the modifier. Because the particle speed can become very high, very quickly, you can limit the speed to the value in the 'Speed limit' setting.

The maximum speed the accelerated particles will have.

From this menu you can select which of the objects in the 'Attractors' list will be used to attract the objects. Note that if the list is empty, the particles are attracted to the position of the modifier itself and this menu is not used.

The positions of all the objects in the 'Attractors' list are averaged and the particles will be attracted to the resulting location. Almost certainly, this will be somewhere in the 3D world other than an actual object position.

Each particle will be attracted to a randomly-selected object from the list.

The object to use if 'Object Select' is set to 'Object Index'.

Drag the objects you want to use into this list. If you leave it empty, the particles will be attracted to the position of the modifier itself. This is the same behaviour as in previous versions of the modifier, which did not use an object list.

You can drop a Mograph Cloner or Matrix object into this list and all clones or matrix elements will be used as attractor objects. Note that if you select 'Object Index' in the 'Object Select' drop-down menu, each clone or matrix element counts as an object. That is, if you have a Cloner with five clones in the list, followed by a primitive cube, the cube would actually have an object index of 5 (the clones would be objects 0 to 4). 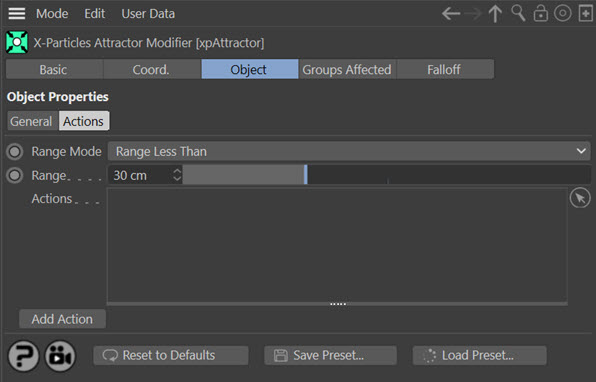 The Actions in the 'Actions' list will be triggered while the particle is closer to the Attractor than the value in 'Range'.

The Actions in the 'Actions' list will be triggered while the particle is farther away from the Attractor than the value in 'Range'.

The minimum distance the particle must be from the modifier for actions in the 'Actions' list to be triggered.

You can drag any action into this list. When the action is triggered depends on the 'Range Mode' setting (see above).