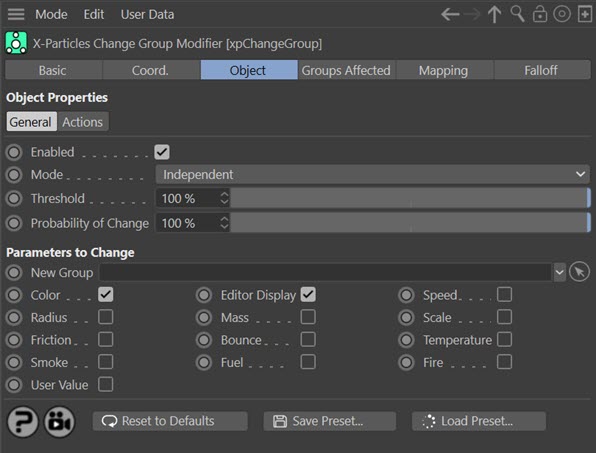 This setting adds a random factor into deciding if the group will change. If it is set to 100% a change in group will always occur (after taking the falloff and 'Threshold' setting into account). If this is set to zero a change will never occur. Between those two values is a probability that the change will take place. This setting is useful to prevent particles always changing group at the same time, so making the effect look more natural. Note that if the probability is set to a low value, and if the particle passes very quickly through the modifier's field of effect, a change in group may never occur.

In X-Particles groups can control several different particle parameters, in addition to the colour and editor display. You can select which options to change from these controls. For example, if 'Color' and 'Mass' are selected, the particle colour and particle mass will be changed to those values in the new group. By default, 'Color' and 'Editor Display' are selected, but you can turn these off if desired.

Drag a Group object into this link box. Particles in the groups in the 'Groups to change' list will all be changed to this group. That is, their internal group number will change and their appearance in the editor will be changed to that of the new group. From then on, those particles will belong to the new group and will only be affected by modifiers and actions which affect that group.

If there is no Group object in this field, no groups will be changed.

If any of these switches are checked the corresponding particle data will be changed to the value given in the new group. 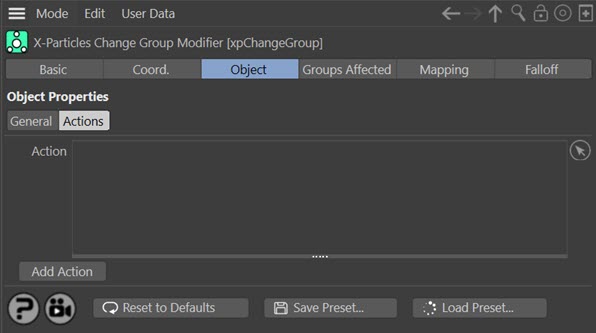 You can drag any Action, or multiple Actions, into the Action list. These Actions will be carried out when a particle group is changed. Note that you don't need an accompanying Question to trigger this Action. The Action is triggered directly by the modifier.