The settings in this quicktab are used in conjunction with the Fluid FX object. They are not used with the PBD Fluids object. 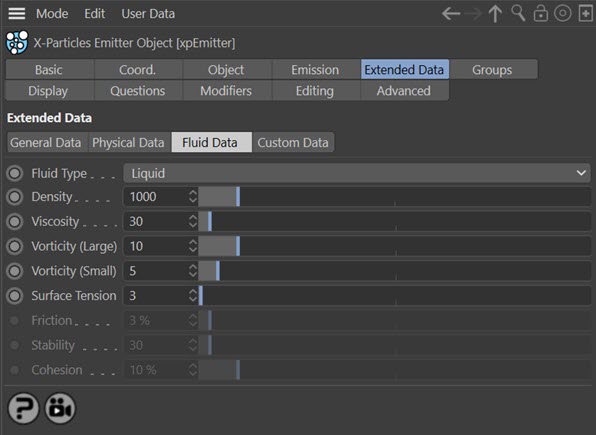 This is a drop-down menu with two settings:

By contrast, here the particles behave more like solid granules or sand grains than fluids.

If your scene is using more than one emitter, the solver can deal with high density contrasts between the different emitters. Safe ranges might be a Density of 10 for emitter A and Density 1000 for emitter B, for example. But if the emitters have very different particle sizes, very large differences in density can cause instabilities, because big particles are much heavier than small particles, even if they have the same density setting. So if a very small particle has a low density setting, and a very big particle has a high density setting, the actual difference in density can be extreme and the simulation may explode.

This is the viscosity of the liquid. Higher values give more viscous liquids.

This setting refers to large-scale eddies and swirls in the fluid. Increasing this value will increase their effect.

This controls small-scale swirls and curls in the liquid, and as with 'Vorticity (Large)' increasing this value will amplify the effect.

Surface tension is a force which will always try to minimize the surface area of a fluid. A fluid has volume and it has surface area. The perfect shape for a volume is always a sphere, so the more surface tension you apply, the more the fluid will contract and (in zero-gravity) form a sphere.

This setting is only available if 'Fluid Type' is set to 'Granular'. It controls the friction of the granular particles as they slide along a surface.

This setting is only available if 'Fluid Type' is set to 'Granular'. It represents the 'stickiness' of the particles, so the higher it is the greater the tendency to form clumps.

This setting is only available if 'Fluid Type' is set to 'Granular'. The cohesion force is the force which keeps the particles together in clumps. With a higher cohesion force you will see larger clumps of particles but more particle 'bouncing'. Smaller values give a softer sand look with few clumps and less tendency to bounce.