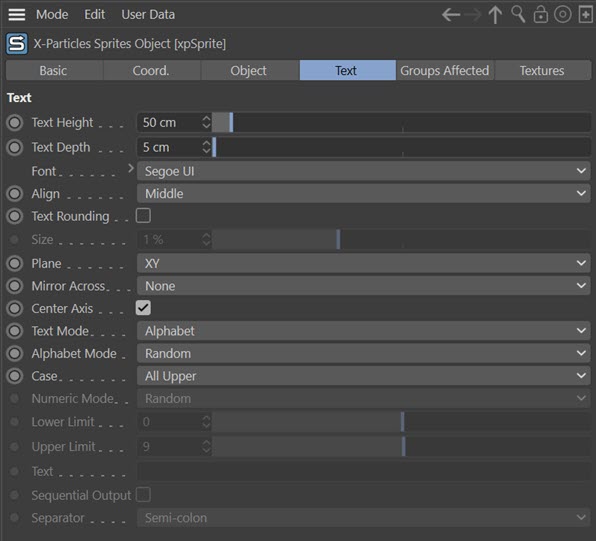 The height of the text in scene units.

The depth of the text along the Z-axis in scene units (this corresponds to the Z-component of the 'Movement' setting in an Extrude object).

Use this setting to choose the font for the generated text.

Enables you to left-align, right-align, or centre the text.

Checking this switch applies a bevel to the generated text. The size of the bevel can be set in the 'Size' field.

Sets the size of the bevel on a text sprite, expressed as a percentage of the text height. Generally, the size should be 5% or lower for best results.

The plane on which the text is generated (the default is the XY plane).

With the default settings the generated text is readable when viewed along the positive Z-axis. Depending on the 'Plane' setting and the camera angle, the text may be inverted when you look at it. If so, you can change its orientation with this drop-down. It enables you to reorient the text along any axis or combination of axes. You will probably have to find the correct one for your purposes by trial and error.

If you look at a Text spline in Cinema, and drop this in an Extrude object which you then make editable, the axis of the polygon object which results is located at the bottom and front of the object instead of in its centre. This is often perfectly acceptable, but not if you want to emit a trail from the text - in that case you probably want the axis to be centred on the text. If this switch is checked the axis is centred on the text, if unchecked it is left at the default setting.

Only letters are displayed. These are selected from the standard alphabet; the letters selected depend on the 'Alphabet mode' setting.

Only numbers are displayed. The numbers generated depend on the 'Numeric mode' setting.

Letters are displayed followed by numbers, so you can generate strings such as A1, B2, etc. if you need to.

The text generated is taken from the 'Text' field.

The text generated is taken from the 'Text' field and is then followed by a number, determined from the 'Numeric mode' setting.

The text consists of a string of words or phrases separated by a character selected from the 'Separator' menu. The text displayed will be one of the words or phrases from the text. They will be shown in order if 'Sequential Output' is checked.

This setting is only available if 'Text mode' is set to 'Alphabet' or 'Alphabet and numbers'. It has two options:

This setting is only available if 'Text mode' is set to 'Alphabet' or 'Alphabet and numbers'. It has three options:

This setting is only available if 'Text mode' is set to 'Numbers', 'Alphabet and numbers' or 'User text and numbers'. It has two options:

Numbers are generated randomly between the values in 'Lower Limit' and 'Upper Limit' inclusively.

Numbers are generated starting with the value in 'Lower Limit' then incrementing by 1 each time until 'Upper Limit' is reached, at which point it reverts to the lower limit value again.

This setting is only available if 'Text mode' is set to 'Numbers', 'Alphabet and numbers' or 'User text and numbers'. It shows the smallest number which will be generated.

This setting is only available if 'Text mode' is set to 'Numbers', 'Alphabet and Numbers' or 'User text and numbers'. It shows the largest number which will be generated.

If you set this to a sufficiently large number you can ensure that in 'Sequential' mode the numbers are never repeated, i.e. they are unique.

This setting is only available if 'Text Mode' is set to 'User Text' or 'User Text and Numbers'. The text in this field will be generated. No changes are made to the case of the text.

This setting is only available if 'Text Mode' is set to 'User Text' or 'User Text and Numbers'. Normally, in these modes each particle will carry the full string of characters from the 'Text' field. By checking this switch, the Sprite object will generate one character from the string in the 'Text' field, in sequence. When the end of the string is reached, the sequence will start again from the beginning.

If 'Text Mode' is set to 'User Text and Numbers' each character from the string in the 'Text' field will have a number appended to it. The number will either be chosen at random or in sequence, depending on the chosen option in 'Numeric Mode'.

If 'Text Mode' is set to 'User Text (Phrases)' and this switch is checked, each phrase will be chosen in sequence. Otherwise the phrase is chosen at random.

Only used if 'Text Mode' is set to 'User Text (Phrases)'. It defines the character used to separate the individual phrases. The choices are: