This object is deprecated in the latest version of X-Particles because it has been replaced with the new dynamic Flocking modifier.

This modifier attempts to emulate the flocking effect seen in bird flocks and fish shoals. It uses the rules for “boids” developed by Craig Reynolds. If you want to know more, search for “boids” on Google and you will find many references.

When using this modifier, it is strongly recommended that the emitter emits only a single pulse of particles or emits them over a short period – say 10-30 frames. If you use a continuous stream of particles, the existing particles will be influenced by the new ones being born and you will find that the flock becomes a swirling mass that doesn't really do anything.

Please also see the manual page for the Flock Helper, which adds extra functionality to the flocking system.

This modifier has the following tabs: 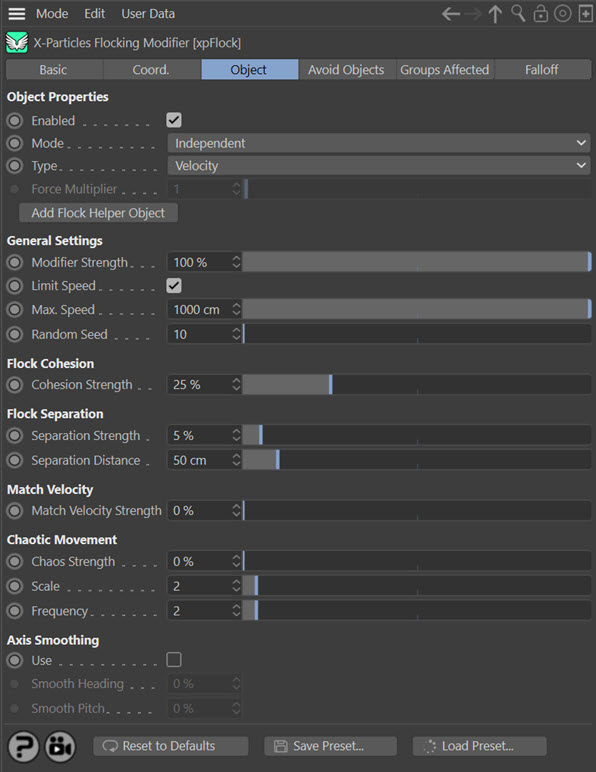 Click this button to add a Flock Helper object to the scene as a child object of this modifier.

Note: this is the only way to add a Flock Helper to the scene. The object is not available from the X-Particles menus.

This is an overall strength setting for the modifier; the lower the value, the less effect the modifier will have. Values above 100% are permitted.

The tendency of the modifier is to increase particle speed in an attempt to keep the flock together. You can limit the maximum speed of the particles by checking this switch.

The maximum allowed speed of the particles if 'Limit Speed' is checked.

You can change the seed used by the random number generator in the modifier by using this parameter.

This setting controls the strength of the tendency to maintain distance from other flock members.

This is the distance that individual particles will try to remain from each other. The smaller this is, the smaller and tighter the flock will become. If it is too small, you will get more of a vibration than a flocking effect; if too large, the particles will remain so far apart they don’t look like a flock.

This is the tendency of the members of the flock to match the speed and direction of other members. The higher this value is, the more uniform the flock movement will become.

These settings can be used to add some additional chaotic movement to the flock if it is too uniform.

The higher this value, the more chaotic the movement.

These values alter the underlying turbulence which is applied to the movement. They have the same effect as in the Turbulence modifier.

These settings can smooth the movement in terms of heading and pitch. The higher the value, the less variation is apparent in the movement.

Check this switch to use axis smoothing.

These settings govern the smoothing of the heading and pitch. They can be set independently of one another.

Note: if you turn both heading and pitch smoothing up to 100% you will abolish any direction change and the flocking behaviour will disappear. 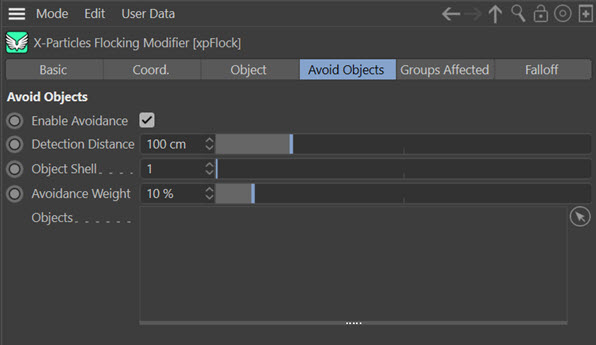 In this tab you can set which (if any) scene objects will be avoided by the modifier.

The movement of the flock is a combination of various forces acting on its members (these are shown in the 'Object' tab). The requirement to avoid scene objects is another such force and is added to the overall particle direction after the various flock rules have been calculated. This parameter sets the weight which is given to the need to avoid the scene objects. The higher the value, the more 'wary' of scene objects the particles will become.

Drag the objects you want the particle to avoid into this list. You can add any kind of polygon object, or an object that would be a polygon object if it was made editable (e.g. object primitives, C4D generator objects, the Mograph cloner, etc.) but not objects without polygons (e.g. splines, lights, etc.).