To see how to use the Fluid FX object, please see the 'Using Fluid FX' section below. 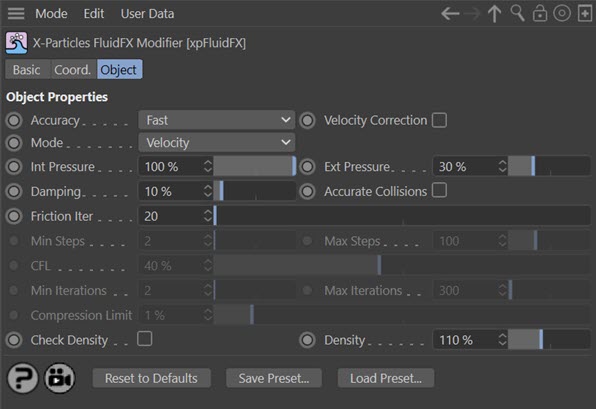 This object is the overall controller of Fluid FX and most of the changes you will want to make are either in the emitter's Fluid Data section or in the Fluid FX Collider tag (current release version only, not the Early Access builds). You may not need to change much in this object, but you need to add this object to the scene to use Fluid FX.

This drop-down menu contains a number of presets for the settings in Fluid FX. With the more accurate options, the simulations will run more slowly.

If you choose 'Custom' you can set your own values for 'Min Steps', 'Max Steps', 'CFL', 'MIn Iterations', 'Max Iterations' and 'Compression Limit'. With all other options, these settings are not available.

Checking this switch causes Fluid FX to correct the 'divergence' when the fluid tends to compress or expand (which should not happen, fluid being incompressible). The solver first corrects the density, but this alone will not change how the particles flow so in theory they will still not be moving in a technically fluid flow motion. 'Velocity Correction' does an extra solve to them change the velocity so the fluid flows around and does not compress/expand (divergence free).

Note that turning this on will slow the simulation, so it is off by default.

Note that using the 'Position' mode results in a slower simulation and in the fluids being iterated, which can make them more viscous.

This is the default solver and gives the same behaviour as in previous versions of X-Particles.

Changes to a position-based solver to allow full interaction with other X-Particles objects.

Internal pressure forces the particles apart, ensuring the fluid does not compress. It acts together with 'Ext Pressure' to produce a surface tension-like effect.

External pressure pushes the particles together, ensuring the fluid does not expand. It acts together with 'Int Pressure' to produce a surface tension-like effect.

Check this switch to improve the accuracy of collisions between the particles and a collider object.

Friction (between fluid particles) is only used for granular simulations. Therefore this setting has no effect unless in the emitter's Fluid Data section you have set the 'Fluid Type' to 'Granular'. You can then use it to alter the friction between granular particles.

Fluid FX uses subframes and this parameter is the minimum number of time steps per frame.

Fluid FX uses subframes and this parameter is the maximum number of time steps per frame.

In each subframe, a particle must never move farther than its own diameter. (Note: this means that the particle radius will have a significant effect on the simulation.)

The CFL parameter controls how aggressively the solver increases subframes to ensure this condition is met. Technically, a value of 40% is safest (you can lower it but the usual result is a slower simulation and not much else).

Practically, in some simulations, you can increase this value to 90% but collision accuracy and also stability may suffer. It is a matter of testing and experience.

This is the minimum number of solver iterations. If you reduce it the simulation can be faster but at the cost of reduced accuracy.

This is the maximum number of solver iterations. If you reduce it the simulation can be faster but at the cost of reduced accuracy.

This is the maximum loss of fluid volume which can occur during the simulation expressed as a percentage value. If you increase it, fewer iterations are required but the amount of bouncing and elasticity increases, which may not be desirable. Smaller values require more iterations (so the simulation is slower) but reduces the bouncing/elasticity effect.

This setting is off by default. Occasionally (for example, with slow-moving particles on emission) you may still need to turn this on, but there is now much better control and you can alter the 'Density' value to obtain a stable simulation.

How to use Fluid FX

To use this simulator you will need:

With a very basic setup you will see something like this:

You can make further adjustments to the simulation in the emitter's Fluid Data section. Those settings are usually more important than the ones in the Fluid FX object, for which the default values are often satisfactory.

If particles are leaking through the container check the following:

In the X-Particles Collider tag, there is a list of Actions to be carried out when a collision occurs. However, please note that with Fluid FX, particles will collide with an object but will NOT trigger actions. This is currently a limitation of Fluid FX.

Introducing animated geometry adds to the complexity of the simulation. Geometry is updated only once per frame, but the solver operates on many steps per frame. This means that the solver cannot see what is happening between its own substeps, because to the solver, a geometry object always looks static. This means that information about the animation is effectively lost and this results in possible issues with rapidly moving geometry.