This modifier increases or decreases the scale (or radius, or mass) of a particle. 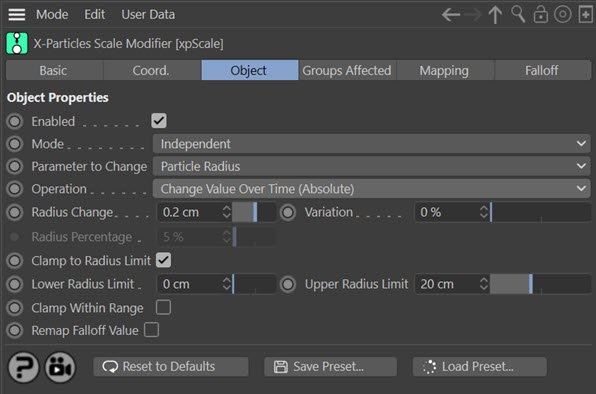 This drop-down menu has three settings.

Changing to this mode will alter the interface slightly: 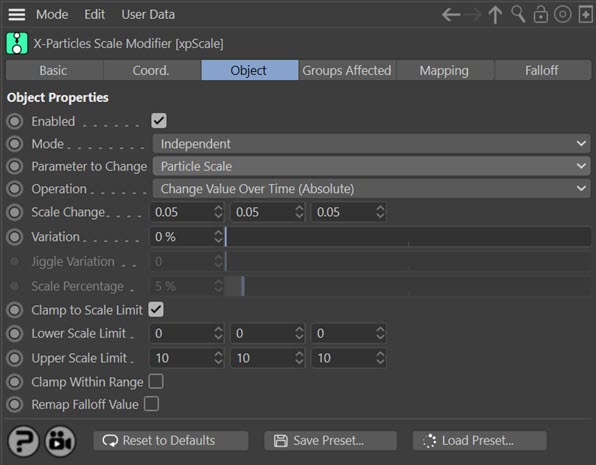 The modifier will increase or decrease the particle mass. Again, changing to this parameter will alter the interface slightly: 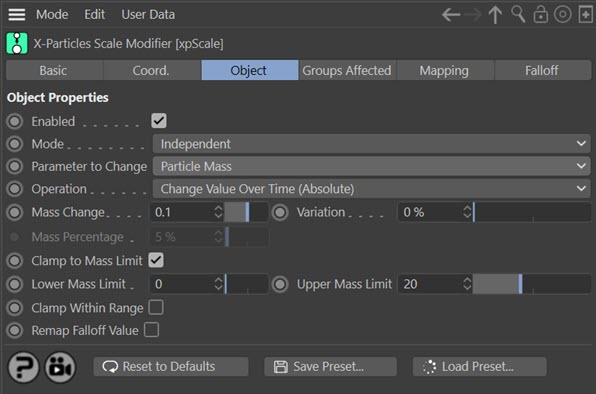 This drop-down has several settings:

This is the same parameter as 'Change Value Over Time' found In earlier versions of X-Particles.

One problem with changing a value over time is that the value (radius, scale or mass) for each particle is altered by the same amount each frame. For example, if the 'Radius Change' value is 0.2 scene units, the radius of each particle will be increased by that amount each frame. This might not be desirable for particles with very different initial radii.

If you select this mode, the 'Radius Percentage' (or mass or scale percentage) parameter becomes available. This will change the value of the radius by a percentage of its value, so small particles will scale up less rapidly than large ones.

If this option is selected, the modifier will simply set the scale (or radius, or mass) value but will not change it over time. In this case, the relevant 'change' field is removed and a 'value field appears instead. You can then control the value using data mapping.

As for 'Change Value Per Frame' but with random variation added. The amount of variation is set in the 'Jiggle Variation' field. This results in a constantly changing scale each frame, giving a jiggle effect. It is only available for scale, not radius or mass.

This enables you to alter the object scale over the lifetime of the particle by using the spline interface in 'Scale Spline'. The 'Scale Change' value is ignored. You can use the spline to change the scale by a factor where a scale of +1 is no change in scale, +2 is twice the scale, and 0 is an object with zero scale - i.e. it will be invisible. The initial scale is set the by the Y value of the leftmost point on the spline. Also be aware that negative Y values will be clamped at zero.

If you select this option, the following interface appears: 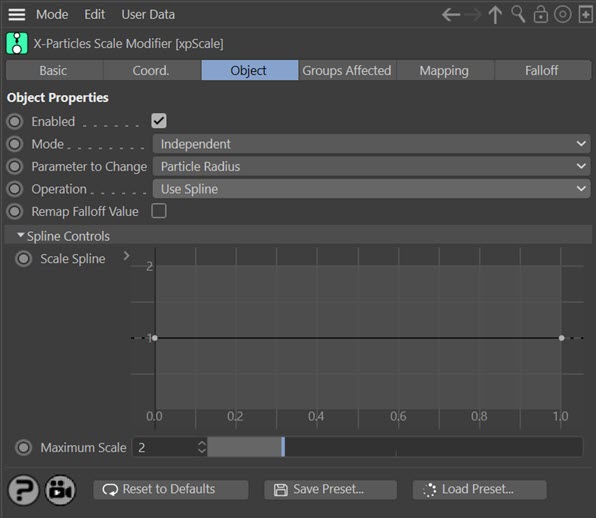 (The interface is the same whether you are changing the scale, radius or mass.)

As for 'Change Value Per Frame' except that the particle speed is used as a multiplier of the scale change. Effectively, the faster the particle, the greater the change in scale, radius, or mass.

As for 'Scale by Speed' except that the particle acceleration (i.e. the change in speed over successive frames) is used as a multiplier of the scale change. Effectively, the more the particle speeds up or slows down, the greater the change in scale, radius, or mass.

With this option, you can change the scale, radius or mass with a shader. This uses the following interface:

This parameter is not available if 'Operation' is set to 'Use Spline' or 'Set Value'.

This is the change to apply to the scale of the object whose associated particle passes into the modifier’s field of effect. Negative values will cause the scale to decrease, positive values will increase the scale. Note that it is possible to set different changes in scale on different axes of the particle, if desired.

The full increment is applied to particles passing through the modifier’s red zone; those in the yellow zone have their scale altered in a reduced amount, depending on the strength of the falloff.

A variation applied to the scale change. A 20% variation would mean that the actual scale change for any particle will be somewhere in the range given by 'Scale Change' value +/- 20% of that value. This will cause the change in particle scale to vary from one particle to another.

This setting is not available if 'Operation' is set to 'Use Spline' or 'Jiggle'.

A random variation applied to the particle scale (not radius or mass) if 'Operation' is set to 'Jiggle'. This

If this switch is checked, the scale of the object will be clamped at the values given in the 'Lower Scale Limit' and 'Upper Scale Limit' fields. This option is not available if 'Operation' is set to 'Use Spline'. Regardless of this setting, the modifier will never set the particle scale to be less than zero.

The minimum and maximum possible scales of the object. Not used if 'Operation' is set to 'Use Spline'. 'Clamp to Scale Limit' must be checked to change these settings. The lower scale limit cannot be less than zero.

This is only available if 'Operation' is set to 'Set Value'. It is the scale value which will be set by the modifier.

These are the same as the scale parameters 'Scale Change' etc., and are only available if 'Parameter to Change' is set to 'Radius'.

These are the same as the scale parameters 'Scale Change' etc., and are only available if 'Parameter to Change' is set to 'Mass'.

These are the percentage values to change the radius, mass or scale if 'Operation' is set to 'Change Value Over Time (Relative)'.

If this switch is checked, instead of a scale (or radius, or mass) value being clamped to the upper or lower limits given in the lower and upper limit parameters, it will be clamped to a randomly-selected value between those two settings. The effect of this is that the modifier will increase (or decrease) the scale until the scale reaches the random limit, thereby resulting in particles having different final scales, rather than them all having the same final scale.

Note that this feature may cause a sudden jump in the particle size if the 'Clamp Within Range' switch is also checked. This is unavoidable and it is recommended that these features are not used together.

When 'Operation' is set to 'Use Shader' you have access to several additional parameters. You can add a shader to this link and the scale, radius or mass is derived from the value returned from the shader. Any channel shader can be used but Noise gives the best results. Here is an example using an animated Noise shader to change the radius of particles stuck to a sphere:

Although you cannot set a point on the spline to be less than zero, the spline shape may make some points along its length have negative Y-values. These will all be clamped at zero (i.e. the object will have zero scale).

When using this spline, you should be aware of one issue. Suppose the scale of the object is set to 1 in the generator (or sprite) object but the leftmost point on the spline has a Y value of 0.5. What you will see is that for the first frame the object has a scale of 1, then in the next frame the scale immediately drops to 0.5. This is inherent in the way modifiers work - they are called after the initial particle generation - and the way round this is simply to ensure that the object scale in the generator is set to the same value as in the Y-value of the leftmost point in the spline.

Note that the Change Scale Action does not control the spline, so if you set 'Operation' to 'Use Spline' the action will no longer be able to control the object scale. In action-controlled mode the spline will still control the scale, but the modifier will have no effect until an action sets the particle to be affected by the modifier.

By default the maximum Y value in the spline is 2. You may want to scale up the objects more than that. To do that, use the 'Maximum Scale' setting (you can reduce it as well, of course, for finer control over the value). This parameter is only available if 'Operation' is set to 'Use spline'.