This shader enables shading of the particles without any geometry. If you want to render your particles and have them cast shadows without using objects then this offers the fastest and highest quality way to do so.

If you need to render thousands or millions of particles then this is the only practical way, using objects with that number of particles would be far too slow and use far too much memory.

The XP Material can also render splines without the need for geometry, and has volumetric rendering for gas, smoke, fire, etc.

To use this shader you should:

To render a spline:

For details of how to use the FLIP solver and the XP Material for volume rendering, see the main Volume Rendering page.

The material includes the following tabs: 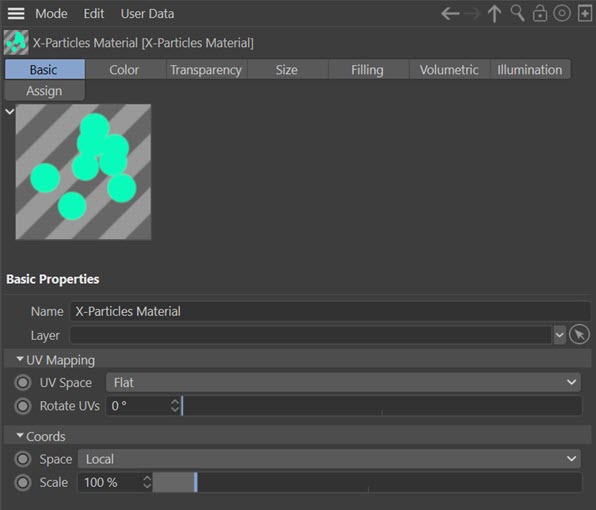 Note: this tab is ONLY visible in the Attribute Manager. It does not appear in the material editor.

Each particle, when rendered, can be given a set of UV coordinates, even though it is not an object. You can change the UV space and rotate the UVs with these settings.

This drop-down assigns the UV space. It has three settings:

This is the coordinate space used to sample shaders in the material. It has the following options:

Used to change the sampling coordinates by scaling them up or down. 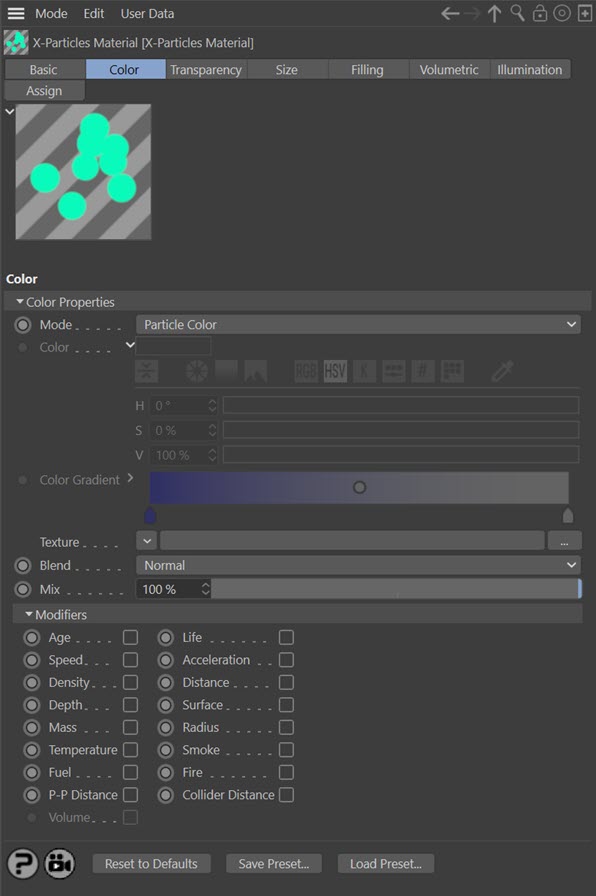 This drop-down menu has four settings:

The colour used in the 'Single color' mode.

The gradient used in the 'Random (from Gradient)' mode. It is unavailable in other modes.

In any mode, a shader or bitmap can be placed into this link and the particles will then be rendered with that shader (or bitmap). With this setting X-Particles can now be used as a true placard renderer, without the need for any additional geometry. Alpha textures can also be used by adding them to 'Texture' field in the Transparency tab.

Each particle has its own UV coordinates; in the Basic tab (found in the Attribute Manager) you can define the UV space used and an option to add random rotation to the particle UVs.

In addition there are a series of modifiers which will alter the colour depending on certain particle parameters, including:

When one of these switches is checked, additional controls are displayed. Most of these are all very similar, a typical set are the Speed controls:

The Color gradient shows the range of colours of the rendered particles. The actual colour depends on the Min and Max settings. In this case, particles with a speed of zero would be coloured blue, those with a speed of 150 or more would be white. Speeds between those values would result in intermediate colours.

Note that the default gradient colours will vary depending on the modifier selected.

The range of values the shader will use to get the particle colour from the gradient.

This is a little different from the other modifiers:

When this modifier is active, and the particles are being emitted from an object, the particle colour is taken from the surface from which it is emitted.

This drop-down defines when the sampling of the surface should take place:

If checked, the original sampling position (on the emitting object) is sampled for every frame rendered, so if the texture/surface is changing the particle color will also change.

The distance used when 'Sample' is set to 'Distance'.

If checked, the particle is self-illuminating.

If checked, illuminated particles are self-shadowing.

This is different from the other modifiers, and is only available when 'Volumetric' is checked in the 'Volumetric' tab.

This determines the value of the volumetric particle which affects the colour. The options are:

The colour gradient to blend with the particle colour.

Use this tab to set the opacity of the rendered particles. 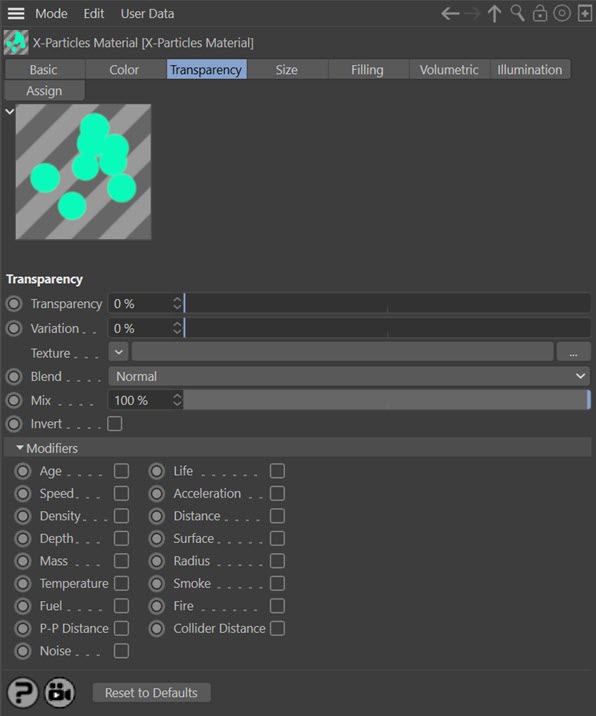 This setting enables some variation to be added to the 'Transparency' value.

If a shader or bitmap is added to this link, it will be used to determine the transparency. This can act as an alpha map to cut out parts of the rendered particle.

Each particle has its own UV coordinates, in the Basic tab (found in the Attribute Manager) you can define the UV space used and an option to add random rotation to the particle UVs.

If checked, inverts the transparency (so black becomes fully opaque rather than fully transparent).

The same modifiers as in the Color tab. The displayed settings differ slightly from the colour settings, here is the Speed modifier set:

The only difference is that the gradients use a greyscale value where black is fully opaque (zero transparency) and white is 100% transparent.

The Transparency tab has an extra modifier, Noise: 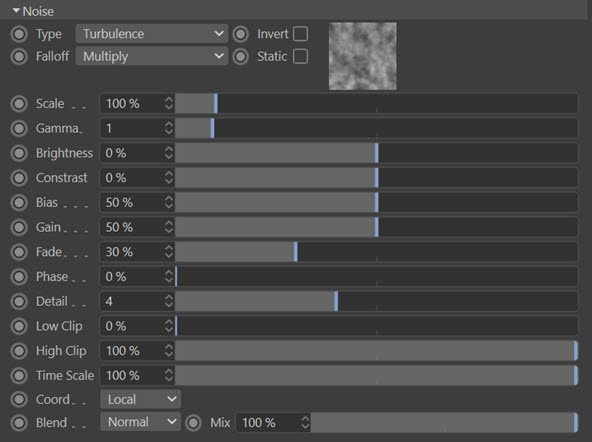 This enables you to add noise to the transparency.

The noise type, as seen in the Cinema 4D Noise shader.

The method by which the noise from individual particles is blended:

If this switch is checked, the noise will not be affected by time, otherwise it will change as time passes (if the noise type supports that).

Scales the noise effect up and down.

Alters the gamma value of the noise.

These are the same parameters as found in the standard Cinema 4D Noise shader. Please refer to the Cinema 4D Help files for details.

Controls the noise intensity. Lowering it shifts the level through the noise value to make the noise more prominent. Increasing it will flatten out the noise, making it less noisy.

As with 'Bias', this can be used to affect the noise intensity.

This setting softens the noise so it fades out further from the particle.

Increasing this value will move the noise with time, rather like an offset.

This is the noise detail, that is, the number of octaves the noise is built from.

This will scale the document time to speed up or slow down animated noise (assuming 'Static' is not checked).

Low and high clipping values, as in the Cinema 4D Noise shader.

The coordinate space used to create the noise. If set to 'Default' the coordinates are taken from the 'Basic' tab. 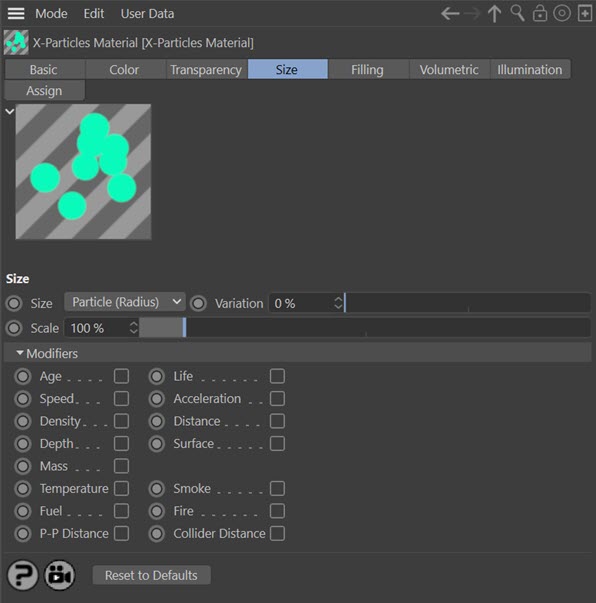 This drop-down menu determines the size of the rendered particles. It has three settings.

A custom size is set in the 'Custom' parameter. In this mode, particles which are farther from the camera are rendered smaller than those close to the camera.

A custom size is set in the 'Custom' parameter. In this mode, all particles are rendered the same size regardless of distance from the camera.

This setting is only available when 'Size' is set to 'World' or 'Screen'. It is a custom setting for the rendered particle size.

Regardless of the 'Size' mode, this setting is used to add variation to the size of the rendered particles.

Regardless of the 'Size' mode, this setting is used to scale the size of the rendered particles up or down.

The same modifiers as in the Color tab, with the exception of the Radius modifier, which is not relevant in this tab. 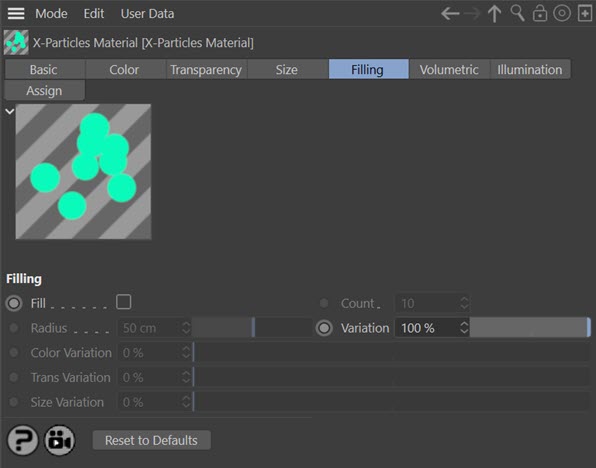 The number of fill particles to add for each 'real' particle. 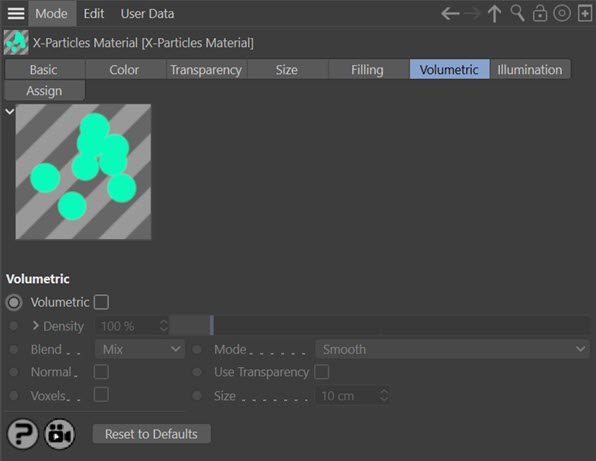 This tab controls the volumetric rendering of particles. For details of how to use the FLIP solver and the XP Material for volume rendering, see the main Volume Rendering page.

To understand these settings, it is important to understand what the material is doing in volumetric mode. Each ray cast by Cinema 4D at render time is sampled at points along the ray (which are determined by the X-Particles render settings) through any volumetric particles hit.

The lower this is the more transparent the volume particle is. Each particle combines to increase the opacity of each sample point going through the volume.

To see the falloff spline, click the little arrow next to the word 'Density'. The spline controls the density falloff from the centre of the particle's volume (which is spherical).

The ray may hit multiple particles in the scene and this drop-down controls how the particle density volumes are blended together.

There are four options:

This option treats each volume as its own density with the first hit occluding any further along the ray.

Here, the density is clipped at the 'Iso Level' to give a skinner like rendering, rendering the isosurface of the particle volume.

The blending is based on distance weighting from the particle.

The maximum density of overlapping volumes is used.

This is only available if 'Blend' is set to 'Isosurface' (see above).

Once the 'Blend' is selected the curve used to blend the density values can be changed here. To use a custom curve select 'Custom' and modify the spline in the 'Curve' setting.

The drop-down has several options:

The blending curve to use when 'Mode' is set to 'Custom'.

When checked, the material calculates a normal based on the density value. This is used with the illumination modes Diffuse and Phong and is mainly useful when 'Blend' is set to 'Isosurface'.

Only available if Normal is checked. When checked, transparency (e.g. noise) will be included in the normal calculation.

When checked, rather than rendering each particle as a volume it combines them into voxels (the size of which is set with the 'Size' parameter) to give a voxel-based volumetric render.

The voxel size if 'Voxels' is checked. 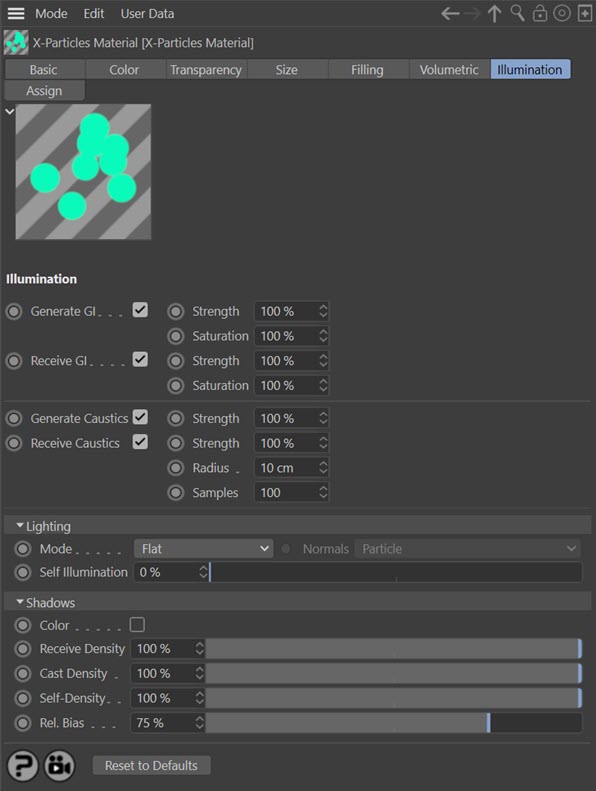 The style of rendered particle. The options are:

Renders as shaded spheres rather than discs.

Particles have a surrounding glow.

These are all scattering illumination models, with each giving a different look. It is suggested the user try each and select the one giving the desired effect.

These modes and their settings repay experimentation as it is difficult to describe the different effects of each. Various parameters will become available depending on the selected style.

The Diffuse and Phong illumination models require a normal to be provided. This drop-down lets you select the source of the normal. It has the following options:

The amount of self-illumination of the particles can be increased with this control. It has a greater effect in some models (e.g. Phong) than in others.

Note that, if you are using Global Illumination in Cinema 4D, particles will not render unless you set this value to be greater than zero.

The amount of colour diffusion. Only available for Diffuse and Phong models. Reducing this value will result in flatter colour shading.

Only available in the Phong model. These parameters control the brightness ('Specular') and size ('Width') of the specular highlight.

Only available in the Fuzzy model. These parameters control the fuzziness of the rendered particle.

Only available in the Neon model. They control the size and falloff of the effect.

Only available in the Henyey-Greenstein and Schlick models. These are scattering illumination models and this setting controls the strength of the scattering.

If checked, this switch enables coloured shadows (from the lights).

As in the Cinema 4D lights, this is the density (strength) of shadows from geometry in the scene cast onto the particles.

Alters the density of the shadow cast by the particles. A value of zero results in no shadows.

This is the density of shadows received by particles from other particles.

This setting helps to keep the shadows from self-shadowing (so a particle doesn't shadow itself). The setting is a percentage of the particles radius.