Note that you can use the Foam object with both PBD Fluids and Fluid FX, the Domain object and indeed any source of particles. 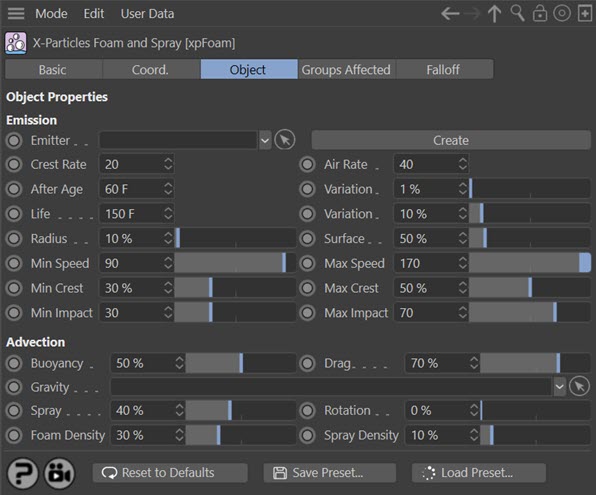 Drag the emitter to use to spawn foam particles into this link.

Click this button to create a new spawning emitter and add it to the 'Emitter' link field. This emitter will be used to create the foam particles.

This is the spawn rate (can be fractional) for particles created at the crest of waves (using the 'Min Crest' and 'Max Crest' settings).

Add some variation to the 'After Age' setting for each particle so that not all foam is created at the same time.

The maximum lifespan of the foam particles. Their actual lifespan depends on how they were created (potential of creation/velocity of particles).

Adds some variation to the life of the foam particles so that they don't all disappear at once.

This parameter controls the spawning radius - that is, the radius of the sphere around each fluid particle that creates foam. It gives more control over the offset of the foam from the fluid surface.

This parameter controls the smoothing radius used to calculate the fluid surface. At 100% it matches that used by the fluid solver (i.e. either Fluid FX or PBD Fluids), but at this value the foam may be located too far away from the meshed surface. At around 50% the fluid surface is closer to the mesh and gives better results for the foam offset from the surface.

These settings represent the curvature of the wave crest needed to create foam particles. A low value implies something flat (which would not realistically create spray) and high values mean something like a wave curving right back on itself (again not realistic) so mid-range value are more natural.

These are the impact speeds between particles needed to trap air and generate foam.

This is the force with which the particles resist the effect of gravity. The lower this value, the more likely is it that particles will sink below the surface of the fluid.

This controls how much the fluid drags the foam/air particles, but does not affect spray.

Drag a Gravity modifier into this link to specify which modifier to use. Otherwise the fluid object will use the first gravity modifier it finds when evaluating modifiers for this emitter (used for buoyancy, opposite to gravity direction).

On creation of the foam particles this controls how much random velocity is given to them to spray them away from the creation point.

If this is set then the foam particles are given a rotation which is then aligned (Y axis) to the fluid surface (when near the surface).

The surrounding fluid density below which particles are considered to be spray or foam.