This modifier rotates the particle stream around an axis. Note that it does not rotate individual particles; the entire stream is rotated.

You can rotate the modifier on any axis and the particles will rotate around the axis shown by the arrow. By default this is along the positive Z world axis. 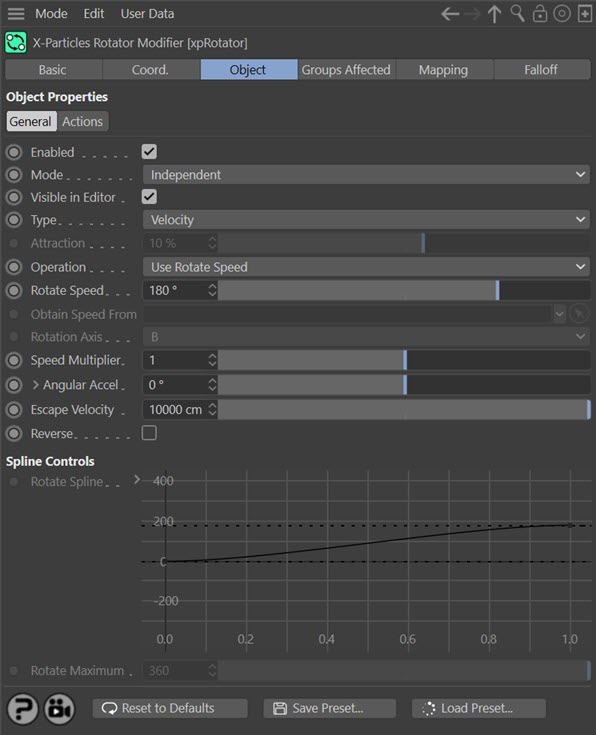 The particles will rotate with the speed given in the 'Rotate Speed' setting.

With this setting, drop an object into the 'Obtain Speed From' link box. The particles will use the same rotation speed as the linked object. You can choose which rotation axis of the object to use to drive the particle rotation.

If this is selected, the rotation speed will be taken from the 'Rotate Spline' attribute.

The rotation speed to use, in degrees per second. This is only used if 'Operation' is set to 'Use Rotate Speed'.

The object to take the rotation speed from should be dragged into this field. This is only used if 'Operation' is set to 'Use Object'.

The axis of the object to use to set the rotation speed. This is only used if 'Operation' is set to 'Use Object'.

The speed of rotation will be changed by multiplying it by this value. You could use it to rotate particles twice as fast as a linked object, for example.

This is a value which is added to the Rotate Speed each frame. This has the effect of speeding up the rotation over time (or, since negative values are allowed, slowing it down). Clicking the little arrow next to this parameter will display additional settings:

This drop-down menu enables you to clamp the maximum and minimum rotation speeds. The settings are:

The minimum rotation speed permitted when this is clamped.

The maximum rotation speed permitted when this is clamped.

As the particles rotate, they are forced out from the centre of the rotation axis, just as if they were being influenced by centrifugal force. This will cause them to travel at ever-increasing speed. If the particle speed exceeds the value in the 'Escape Velocity' setting, they will cease to be affected by the modifier and will fly off with their current speed and direction. The lower this value, the lower the speed the particles must reach to 'escape' the modifier.

Note that if you slow the particles down again, e.g. by using a speed modifier, they may become slow enough to be 'caught' by the modifier again.

If checked, this switch will reverse the direction of rotation.

The rotation speed will be set by the value in this spline, over the particle's lifespan. Only available if 'Operation' is set to 'Use Spline'.

By default the maximum Y value in the spline is 360 degrees. You may want to rotate the particle more than that. To do that, use the 'Rotate Maximum' setting (you can reduce it as well, of course, for finer control over the value). This parameter is only available if 'Operation' is set to 'Use Spline'. 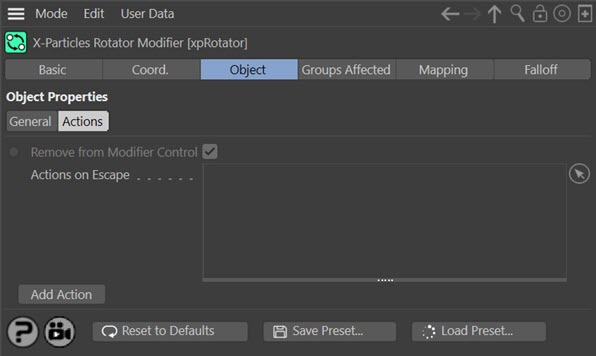 This setting is only available if the modifier is in Action-Controlled mode. If checked, the particle is automatically removed from control of the modifier when it reaches escape velocity. This is a convenience function which has exactly the same effect as if you put a 'Control Rotator Modifier' action in the list which set the modifier to 'Modifier Will NOT Affect Particle'.

You can drag any Action, or multiple Actions, into the Action list. These Actions will be carried out when a particle reaches escape velocity. Note that you don't need an accompanying Question to trigger this Action. The Action is triggered directly by the modifier.