This modifier applies turbulence to particle movement. The effect of the various options can be quite subtle. The best way to see what they do is to create a pair of emitters with identical settings, and link a separate turbulence modifier and trail object to each emitter. Now you can leave one modifier unchanged and alter the settings on the other to see the effect. If you use a different XP material to render each trail object, you can get a clear comparison between the two modifiers. 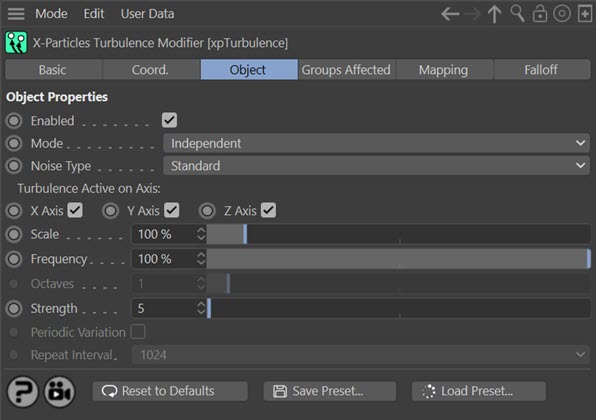 This drop-down has six options:

This gives the same turbulence effect as the standard Cinema 4D modifier.

These add different types of turbulence to the particle stream. Generally, Wavy Turbulence gives a smoother effect but this and Turbulence are fairly similar. 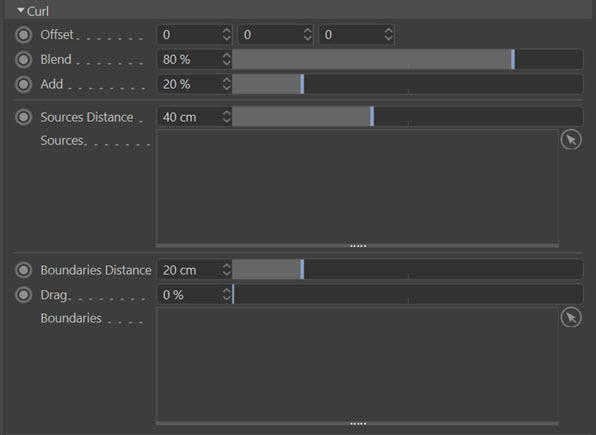 This setting offsets the noise field used by Curl (results in a different curl velocity).

The setting is a blend between the particle's velocity and the curl velocity.

This is the percentage of the curl velocity to add to the particle's velocity.

This setting controls the curl noise field distance from the sources.

Drop curl noise sources into this list (these can be geometry, other particles, particle groups or an emitter).

This is a falloff from the distance over which the velocity field of the curl is affected (squashed to reduce the velocity along the normal to the surface).

This setting slows the velocity field around the surface (tangential, so over the surface).

Drag geometry objects (primitives or polygons only) into this list to act as boundaries that "squash" the curl velocity field (it becomes tangential to the surfaces).

This is an advanced version of the original Perlin noise. For this noise it is recommended that 3-8 octaves and a strength of 30 or higher are used. With lower values the effects are much reduced.

Selecting this option adds these parameters to the interface:

This is the simplex noise type. You can choose between 'Raw', which is the original Perlin noise, or 'MultiOctave', which is more advanced and can produce better results.

Only used in the 'MultiOctave' noise. The higher the value, the more of each octave is added into the noise, and gives a smoother result.

By default the turbulence effect works on all three axes. You can choose which axes the effect should work on by checking or unchecking the 'X axis', 'Y axis', and 'Z axis' switches.

In Standard mode this has the same effect as in the standard Cinema 4D turbulence modifier. In the other modes, larger scales tend to damp down the movement of the particle, giving smoother movement. By contrast a smaller scale will produce more chaotic movement.

This is only available in Standard and Curl modes. It changes the frequency of the internal noise generator used by the modifier, so the higher the value, the more rapidly the noise changes.

This parameter influences the frequency of the turbulence. It is not available for the 'Standard' turbulence mode. A value of zero will result in no change in direction; larger values will result in more frequent and dramatic changes.

Only available in 'Turbulence' noise type. When checked, the turbulence will repeat itself over a period of time. The time taken to repeat is controlled by the 'Repeat Interval' parameter.

If 'Periodic Variation' is checked, you can select how often the noise repeats with the 'Repeat Interval' drop-down ('Turbulence' noise type only). The smaller the number, the shorter the time between repeats. Try a value of 2 or 4 and watch the particle stream - after a certain amount of time, you see that the stream repeats itself.