This modifier works in conjunction with the Sprite Shader to produce effects such as fading out sprites over time (or fading them back in again!). You can use it to alter any channel which has a 'Texture' field in it, including Color, Bump, Reflection, Alpha, etc. 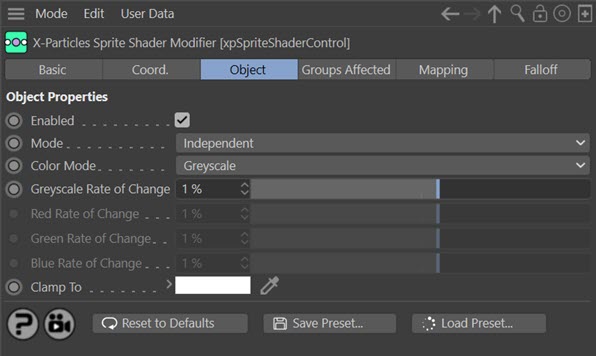 The colour value returned by the Sprite Shader will be increased or decreased by the same amount in the red, green, and blue components of the color. This is most useful when you need a greyscale value to affect something like transparency or reflection. The change in value each frame is given in the 'Greyscale Rate of Change' parameter.

The red, green, and blue components of the returned colour will be altered independently of one another; the change in values each frame are given in the Red/Green/Blue 'Rate of Change' parameters. This is used when you want to alter a real colour value such as in the Color channel of a material.

The colour set by the modifier will be clamped to this colour value. By default this is 100% white.

How to use the modifier

To use this modifier is a little complex. It has the following requirements:

As a particle passes through the modifier, the modifier changes an internal color value held by the particle; the rate of change depends on the settings in the modifier - the higher the values, the more rapid the change. This value is then used by the Sprite Shader at render time to alter the color returned by the material channel.

An example may make this clearer. Suppose we have a scene with a Sprite object generating cubes. A plain red material has been applied to the sprites. We would like the particles to fade out when they enter the field of effect of the Sprite Shader modifier. To do this we will use the Alpha channel, so we add a Sprite Shader to the alpha channel of the material: 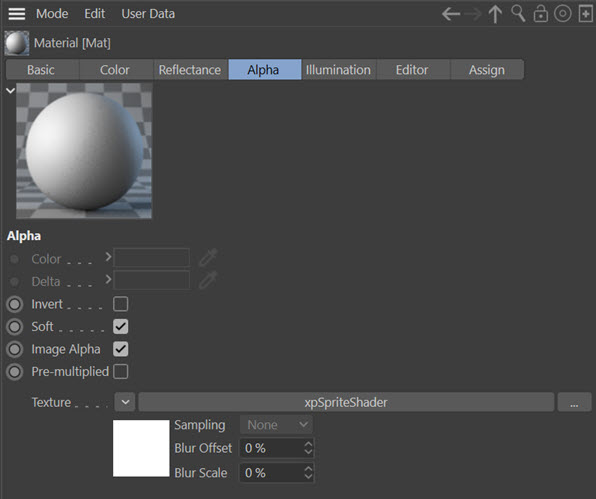 At this point the sprites will always be visible, since the shader always returns white. What we need is for it to change to black to make the sprites invisible.

In the Sprite Shader (not the modifier), we make one change: 'Mode' is set to 'Modifier Sets Value':

What this means is that in the Sprite Shader, and recall that the shader is in the alpha channel of the material, the colour will be set by a Sprite Shader modifier.

Next, we add a Sprite Shader Modifier to the scene. Change the 'Greyscale Rate of Change' value to -2% and (very importantly) change the 'Clamp To' colour to black. Now, as each particle passes through the modifier, the colour returned from the alpha channel of the material applied to the sprite is gradually changed to black, which causes the object to fade and eventually disappear. The results are as follows:

You could reverse this process and fade the particles back in again by using another modifier with the delta set to a positive value and 'Clamp To' set to white.

There are two possible solutions to this. Firstly, to render a frame to the picture viewer in this case, you can render all preceding frames as well, so the modifier can update the required values in the particle. If you are using internal caching, this is the only available solution, but it may be slow if you need to render many frames which you don't need.

If you are using external caching, there is a better solution: in the Cache object, turn off the switch 'Skip Render Pre-Roll'. This will force X-Particles to run through all frames before the one you want to render, thereby updating the modifier values, but it will not render those frames. This can be much faster than rendering all the preceding frames.