This action will let you change the trails generated from a particle. 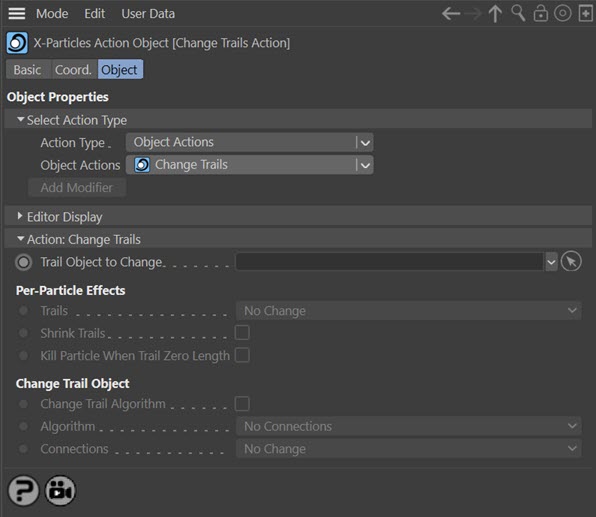 This field accepts a Trail Object which you drag into the field from the Object Manager. Without a linked Trail object, you cannot access any of the other parameters and the Action will have no effect.

These are effects which are carried out on individual particles.

This does nothing to the trail, allowing you to make other settings without affecting existing trails.

If trail generation in this particle has been turned off by an Action, or the Trail object setting 'Trails From Particle Birth' is unchecked, this setting will turn them on.

If trails are currently on for this particle, this will turn them off. All particles will lose their trail as soon as they pass the Question which triggers this Action.

If this switch is checked then the action will shrink the particle trail until it reaches zero. The trail shrinks at 1 point in the trail per frame, this cannot be altered.

Used in conjunction with the 'Shrink Trails' switch. If checked, this will cause the particle to die when its trail has a length of zero.

These settings let you change the Trail object itself.

When checked, you can change the connection algorithm used in the Trail object.

Depending on the algorithm selected, a number of other parameters will become available. These are identical to those found in the Trail object; please refer to the Trail object for details.

With certain types of trail connection it is possible to lock or freeze the connections in the state they have when the action is triggered. For example, suppose you are using 'Nearest By Distance' mode in the Trail object, and the connections are constantly being broken and remade as particles move away from or towards each other. In this case you can use this action to lock the connections at a particular point. From the on, the connections will remain as they are even if the distance between particles changes.

This option only works on certain types of connection. Currently these are:

It has no effect on other connection types.

The drop-down has three options:

The default setting, which has no effect on the connections.

Connections are locked and will not change until the action is triggered again using the 'Unlock Connections' option.