This action will let you change the object(s) associated with the particle and produced by a Generator object. It can either affect particles directly, or act by changing a Geometry modifier in the scene. 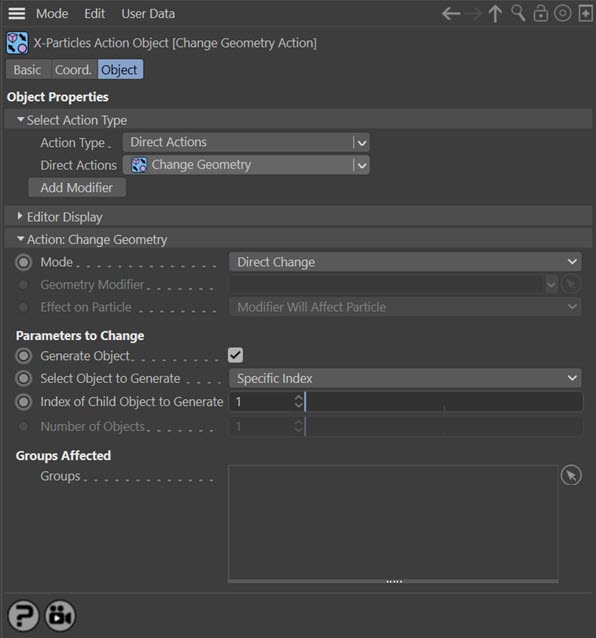 The Action will directly alter the object associated with the particle(s) affected by the Action. It does NOT require a Geometry modifier. This lets you change generated geometry at a precise point without having to work indirectly through a modifier, which can be a little convoluted for such a simple alteration.

In this case the Action will let you control the operation of a Geometry modifier in the scene.

This field accepts a Geometry modifier which you drag into the field from the Object Manager. Without a linked modifier, you cannot access any of the other parameters and the Action will have no effect. In addition, in the modifier's interface the Mode parameter MUST be set to 'Action-Controlled'. If it is set to 'Independent' the modifier will simply work on its own like any of the standard Cinema 4D modifiers and the Action will have no effect on it.

If unchecked, this will cause the generator to stop generating objects for the affected particle.

This drop-down enables you to specify how the Action will change the object to be generated. It has five options:

With this option you must then enter the index of the child object of the generator which will be generated. This is entered in the 'Index of Child Object to Generate' field - see below.

This is the same as the Sequential option but this time, when the Action finds no more child objects it will go back to the first one and the cycle will be repeated. You must enter the number of objects in the 'Number of Objects' field. For example, if the generator has four child objects and you enter '3' in the 'Number of Objects' field, the Action will cycle between objects 1, 2, and 3, and object 4 will be ignored.

Index of Child Object to Generate

This refers to the index of the child object of the generator linked to any Emitter which is affected by this Action (see the Generator object for more details). It is up to you to ensure that this index is valid. If you enter ‘3’ into this field, and the Generator only has two child objects, nothing will be generated and the object will seem to just disappear. This parameter is only available if you choose 'Specific Index' in the 'Select Object to Generate' drop-down.

This is the number of objects, used in conjunction with the 'Random' and 'Sequential With Wrap' options in the 'Select Object to Generate' drop-down.