This quicktab is concerned with various items of extended data, including that required for particle rotation. 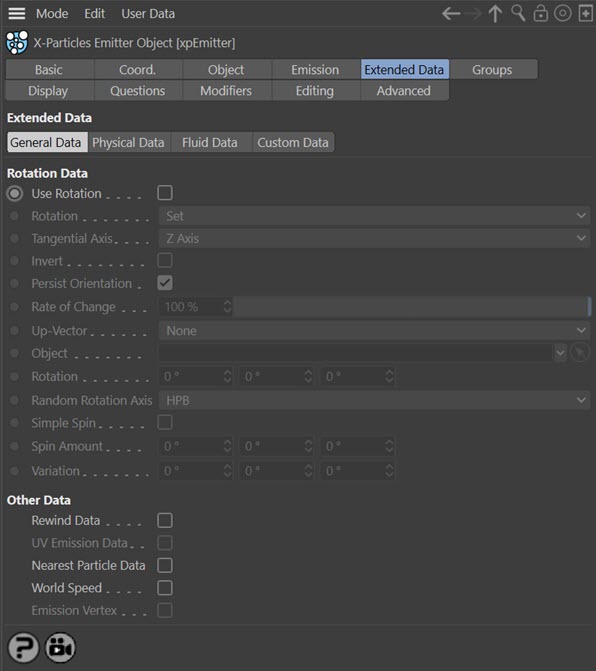 This group of settings determines particle rotation and spin. Therefore, if you want to rotate or spin your objects, you must turn on particle orientation in the emitter. By default, rotation is not enabled since it requires significant extra data to be allocated to the particle. If you don't need to rotate the particles or generated objects, leave 'Use Rotation' unchecked.

To use particle rotation, check this switch. This is essential if you want to rotate objects linked to the particles, but it uses additional memory so is not enabled by default.

This drop-down has six settings:

The particles are not rotated but the necessary data structures are created so that you can use a Spin Modifier, for example, to spin the particles (and linked objects).

A specific initial rotation can be given to the particles by changing the value in the 'Orientation' field. A Spin modifier, if present, will override this setting.

The particles are given a random initial rotation. The axis on which the rotation is set can be changed in the 'Random Orientation' drop-down. A Spin modifier, if present, will override this setting.

The particles are rotated to align their Z-axis towards the current camera. If the 'Persist Orientation' switch is checked, the particles will be reoriented each frame as their location and direction (or that of the camera) changes.

The particles are rotated to align their Z-axis towards the object given in the 'Object' field. If the 'Persist Orientation' switch is checked, the particles will be reoriented each frame as their location and direction (or that of the object) changes.

With this option the particles always face the current viewport. This means that they are not rotated except to face the screen. This is not the same as facing the camera, since that only rotates the object to point its Z-axis at the camera. You can see the difference in this screenshot:

Note the differences in rotation between the two modes.

This mode deals with the problem of axis flipping (especially on bank) when particles are moving over a surface using the Follow Surface modifier. Often, you will want the particle to maintain the same orientation with respect to the surface despite changes in direction. To enable this, select this mode, which will make the Y-axis of the particle perpendicular to the surface.

Note that this mode only works with the Follow Surface modifier at present. With all other modifiers it has no effect.

This is only available if 'Rotation Mode' is set to 'Tangential'. In earlier versions of X-Particles, tangential rotation always aligned the particle Z-axis with the direction of travel. With this setting you can align any axis to the direction. The options are simply the three axes of rotation; the default is the Z-axis.

What is the use of this? For particles with no generated geometry attached it can almost always be left alone. It can be extremely useful, however, if you have generated objects which need to be aligned along a specific axis.

Consider an emitter with tangential rotation set to the default Z axis, and a Generator producing primitive pyramid objects. With the particles changing direction the animation would look like this: 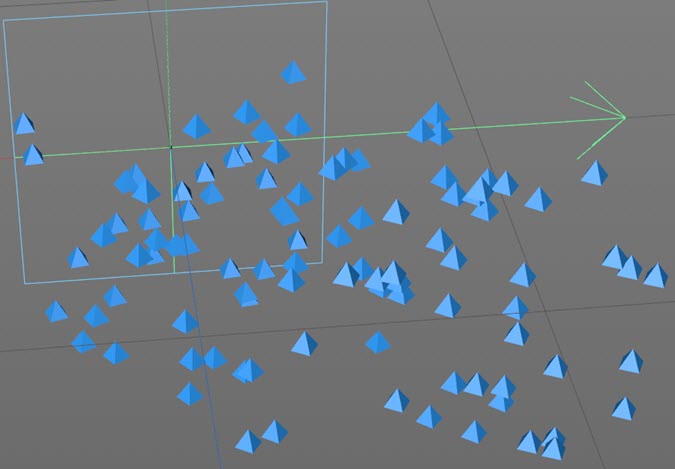 You can see that the apex of the pyramid points upwards but we might want it to point along the direction of travel instead. By changing the tangential axis to Y, we see this: 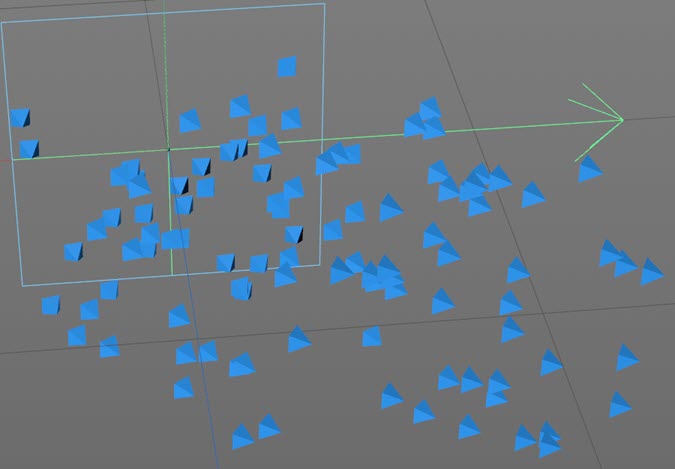 In this case, it is true that we could get the same effect by changing the orientation of the pyramid itself to +Z. But that option won't always be available or it may be undesirable to change it. In such cases this setting can be especially useful.

For further explanation, see the article 'The importance of Tangential Axis' in this manual.

If checked, the rotation specified in these settings will be inverted.

Only used in 'Tangential', 'Face Camera' or 'Face Object' modes. If it is unchecked, the particles are oriented correctly on birth but are not re-oriented as the scene plays. If it is checked, the orientation will be constantly maintained and updated.

Only used in 'Tangential', 'Face Camera' or 'Face Object' modes. This has been introduced to deal with the issue that changes in particle direction may result in an abrupt snap to a new rotation. For example, suppose a Direction modifier changes the direction by 90 degrees in one frame. If 'Tangential' mode is set, the particle will instantly snap to a new rotation value. This may be what you want to happen, but it may be that you would prefer a smoother change in rotation over several frames.

Only used in 'Tangential', 'Face Camera' or 'Face Object' modes. This parameter sets an up-vector for the rotated particles; essentially, this prevents the particle from banking so that the the rotation is constrained to the heading and pitch components.

The up-vector is not used.

The object is the 'right way up' when 'Positive Y' is used but upside down if 'Negative Y' is selected.

Drag the object the particles should face into this field. Only used in 'Face Object' mode.

You can set the particles to a specific initial rotation in this field. Only used in 'Set' mode.

If the 'Mode' is set to 'Random', the axis or axes to be randomly rotated can be set in this drop-down. There are seven options representing all possible axis combinations.

If you need to make the particles spin, check this switch. You can then set the amount of spin and add some variation between particles if required.

A Spin modifier, if present, will override this setting and will take over spinning the particles. If you want to use the emitter retiming feature, and you want retiming to affect the spin, you MUST use a Spin modifier. The 'Simple Spin' in the emitter will not be affected by the retiming but spin generated by the modifier will be.

This feature is deprecated and may be removed in a future version of X-Particles.

This is the amount of spin per particle if 'Simple Spin' is enabled. The 'Variation' setting will give a different spin rate to different particles.

If the particle has been emitted from a polygon object in either 'Polygon Centre', 'Polygon Area', 'Texture', 'Object Color' or 'Illumination' mode, the UV coordinates on the object of the position from which it was emitted will have been generated. In previous versions of X-Particles these coordinates were not retained by the particle, but if this switch is checked, they will be stored.

You can use the UV data to sample from a texture applied to the object using the UV coordinates at the point of emission. Then (for example) you could use data mapping to map a modifier value to a texture and always sample it at the same point. This can be very powerful when using an animated texture, for example.

For an explanation of 'World Speed' please see the Question object page. To use the 'World Speed' question you must check this switch to allow the extra data required to be stored.

If you emit particles from the vertices of a polygon or point object, checking this box will cause the particle to store the vertex number from which it was emitted. This can be used, for example, when mapping data to a vertex map tag.