This modifier changes the direction of particles passing through it.

Note that the modifier will draw an arrow to show the direction the particles will take (except in Ring and Spray modes). You can turn this off if desired by unchecking the 'Visible in Editor' switch. 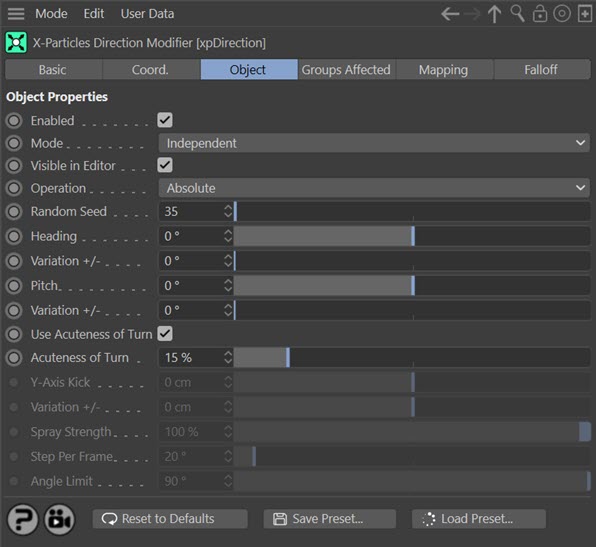 If this switch is checked, the direction for the particles will be shown by an arrow drawn on screen: 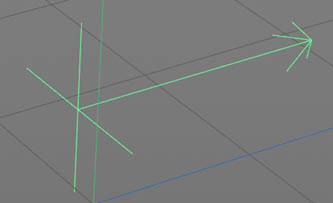 This will not move if you rotate the modifier, as this does not affect the direction, unless 'Operation' is set to 'Use Modifier Rotation' (see below). Uncheck this switch to hide the arrow.

This setting has seven options:

The new direction set by the 'Heading' and 'Pitch' parameters will be relative to the particle's current direction, rather than an absolute direction as found with the 'Absolute' option.

Note that you may encounter gimbal lock with this option when the Y-axis direction exceeds 90 degrees (either positive or negative). This is currently a limitation.

Important: this is a direction in global space. The new direction will always be the same, regardless of the current direction of the particles or the rotation of the emitter.

This option will cause the particles to spray out from their current direction of travel. The width of the spray is governed by the 'Spray Strength' setting (see below). The best results with this option can be seen with a very narrow particle stream with all particles initially travelling in the same direction.

You can rotate the emitter to alter the plane in world space on which the particle moves.

In this mode you can make the particles adopt a flat ring or disc shape. The particles will deviate from their original path by a maximum value set in the 'Angle Limit' parameter. The speed with which they deviate is controlled by the 'Step Per Frame' parameter.

To form a ring, you should turn off 'Sub-Frame Emission' in the emitter. This is because you are trying to generate a specific pattern and sub-frame emission is there precisely to avoid such things! If you leave it on, you will see an irregular disc instead of a ring. The best results with this option can be seen with a very narrow particle stream with all particles initially travelling in the same direction.

The seed for the random-number generator.

This is the particle heading (corresponding to the ‘H’ angle in an object rotation). The variation parameter adds some random variation into the actual heading produced.

This is the particle pitch (corresponding to the ‘P’ angle in an object rotation). The variation parameter adds some random variation into the actual pitch produced.

You may be wondering why there is no setting for Bank. This is because it is not needed. To make a particle move in any direction only requires the heading and pitch. Bank would make the particle spin on its own axis, which is not useful in this case.

Use Acuteness of Turn

This switch is only available if 'Operation' is set to 'Absolute'. If it is checked, the modifier will use the 'Acuteness of Turn' setting to determine how sharply the particle changes direction. Turning it off will cause an immediate direction change with no curve.

The setting required depends on what you want to do and on factors such as the particle speed. Generally, values of 15-20% produce nice, smooth curves.

This parameter lets you control the strength of the Spray mode.

This is only used in 'Ring' mode. It controls how fast the particles deviate from their current path to the limit given in the 'Angle Limit' setting. A large number will cause a very rapid change in direction, small numbers will cause a more gradual change.

This is only used in 'Ring' mode. It gives the maximum angle by which the particle will deviate from its current path. For example, if a particle is currently travelling along the Z-axis with no X or Y axis movement, an angle limit of 45 degrees will result in a maximum 45-degree deviation away from the Z-axis (this could be in any direction along X or Y). The speed with which the limit is reached is governed by the 'Step Per Frame' setting.

You can set this parameter to a maximum of 90 degrees. Note that at or near this setting, you may start to see some distortion begin to appear in the particle stream.