This Action is only useful when particles are moving along a spline. It is used to break the particles away from the spline path. 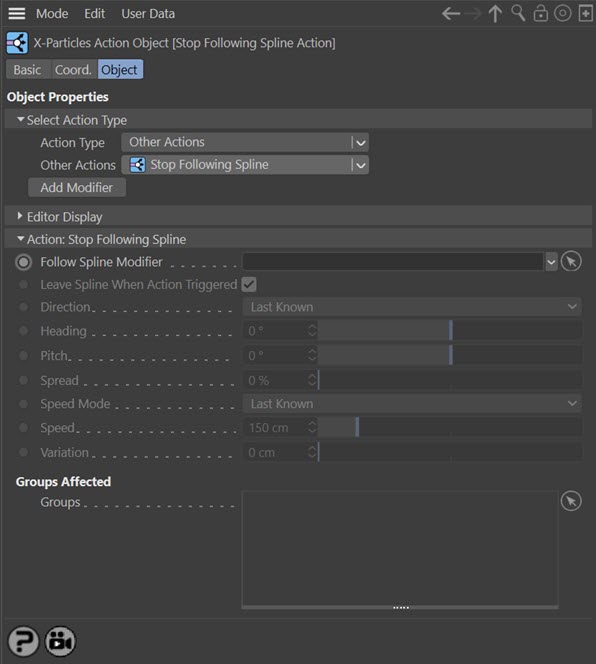 When the particle stops moving along the spline, it must have a direction and speed or it will just sit where it stops. The direction is determined by this setting:

When the particle stops moving along the spline it will take a random direction - in practice a group of particles will adopt a spherical distribution.

With this option you can set the new direction in the 'Heading' and 'Pitch' fields. These work in exactly the same way as the Direction modifier when the modifier's 'Operation' setting is set to 'Absolute'.

This field is not available when 'Direction' is set to 'Random'. In other modes this will fan the particles out along the axis of movement. 'Spread' is a deviation to the particle direction, in percentage terms, from the direction given by the 'Heading' and/or 'Pitch' settings. Given a low value of, say, 10%, this causes the particles to produce a narrow cone either side of the initial path; set to 100%, you will get a hemisphere of particles.

As with Direction, the particle speed when it stops following the spline is determined by this setting:

The particle keeps the same speed that it had when moving along the spline.

With this option you can set a new speed for the particles in the 'Speed' field. This is identical to the Speed setting in the Emitter.

The new particle speed if 'New Speed' was selected in the 'Speed mode' drop-down.

This will build some variation into the actual speed of each particle.