The Sheeter object is intended for the production of thin sheets or films of fluid particles, which it does by adding particles to fill holes in a sheet of existing particles. Best results are obtained using an emitter which generates a flat sheet of particles, such as a Circle emitter set to 'Ring Only' (see the Emitter object for details) plus a fluid solver. It can be used with either the FluidFX or FluidPBD solvers.

Note that although this is in fact a particle modifier, it is specifically intended for use with the fluid solvers in X-Particles and therefore is considered to be a dynamic object rather than a general-purpose modifier. However, it will also work in the absence of a fluid solver.

At its core, this object is a particle modifier. Therefore, like other modifiers in X-Particles, it can be controlled with Actions and can be switched between independent and action-controlled modes.

In this mode, the object will work in the same way as any other modifier: particles will be affected if they come into the field of effect of the object. X-Particle Actions have no effect on the object in this mode.

If a Group object is present in this link field, newly-generated particles will be added to this group.

If you use a Group object here, the newly-created particles will all be added to this group. What you see in the viewport, however, may not be what you expect. Some of these settings are overwritten by the Sheeter object itself after the particles are created:

1. The particle velocity is always set by the Sheeter object, so the Group speed setting has no effect.

2. If 'Interpolate Properties' is checked, the Sheeter will set the following properties by blending the same parameters from nearby existing particles:

This means that you may set a colour in the Group object but the particle colour in the viewport may be the same as the original particles from the emitter.

4. If the Group colour mode is set to 'Gradient (Parameter)' this is ignored, due to a limitation in the system when setting groups other than from the emitter itself.

If this switch is checked, several properties of the new particles are set by blending the same parameters from nearby existing particles - see the 'Group' section above for details.

If it is unchecked the particle properties are simply set from a particle group object, if there is one in the 'Group' link field, or the settings from the emitter if there is no group.

This may not seem to make much difference but properties can vary considerably depending on whether this switch is checked or not. For example, if it is checked changes in the properties of the existing particles as the simulation progresses will alter the property values of new particles on creation.

If this switch is checked, sheet particles will only be created if the particles which create a hole are moving away from each other.

This is the rate at which sheet particles are created from a pair of the original particles. Do not set this too high, as the number of new (sheet) particles can get very large, very quickly.

For particles which are creating a hole, sheet particles will not be added if the speed difference between the hole particles is greater than this speed. This is because the liquid film is then pulling apart too fast to allow the hole to be filled in.

In some circumstances the sheet particles may be added only very sparsely. You can remove these isolated particles by checking this switch and setting the 'Min Distance' and 'Max Density' values.

if 'Remove Sparse' is checked and there are no other particles within this distance of a sheet particle, the sheet particle will be removed.

If this is checked, only particles with a speed in the range between 'Min Speed' and 'Max Speed' will be used when creating sheet particles.

The range of speeds to use when 'Relative Speed' is checked.

If checked, only particles whose age is below the 'Max' value (including any variation) will be used when creating sheet particles.

The maximum age to use when 'Check Age' is checked. Variation can be added to this with the 'Variation' parameter.

Imagine two particles moving in the scene. As you can see in this image, there is an angle between the direction of travel of the first particle (A) and the direction vector between particle A and the second particle (B): 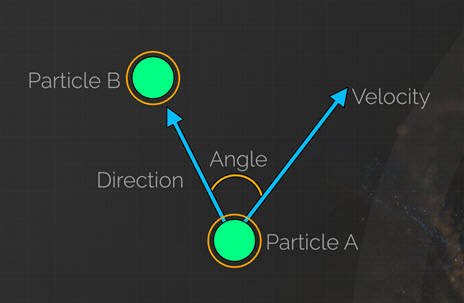 The angle to use if 'Velocity Alignment' is checked.