The purpose of the Object Link tag, as its name implies, is to allow you to attach another object to the object being generated by a Generator. 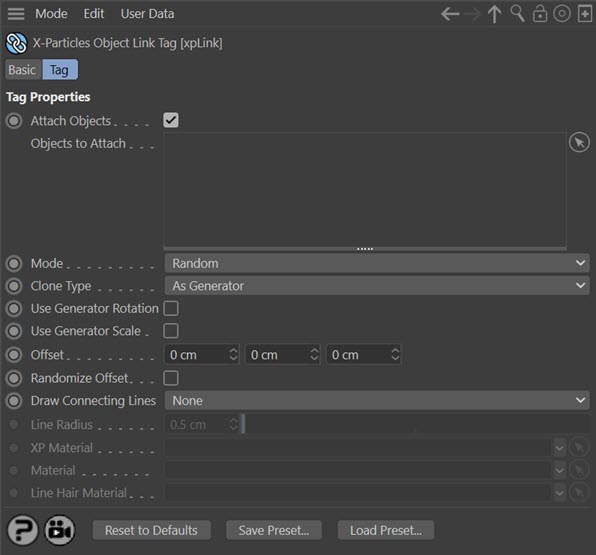 Important: for this tag to be used, the Generator setting 'Use multiple child objects' MUST be set to 'First Child Only'. The tag will have no effect with any other setting. Note that adding an Object Link tag to a Generator object will automatically set the correct setting in the Generator.

If this switch is unchecked, the objects to be attached will not be generated.

Drag the object(s) you want to attach into this list. Which object is generated depends on the 'Mode' setting.

The default setting is 'As Generator' which will then use the same setting as in the Generator object to which the tag is attached.

Note that there is a small issue if you select render instances. In this case the source object which will be cloned will remain visible in the scene and will be rendered. This is due to internal workings of Cinema 4D. A simple workaround is to position the source object off screen in such a position that it will never appear in the rendered image.

If checked, this will cause the attached object to be rotated according to the 'Rotation' setting in the Generator.

If checked, this will cause the attached object to be scaled according to the 'Scale' setting in the Generator.

By default the offset is set to zero, which will generate the attached object at the same position as the object from the Generator. To offset the position, change the values in this field. You can add an offset along any of the three axes.

The tag can draw connecting lines between the object from the Generator and the attached object. There are five options in this drop-down menu:

No connecting lines will be produced

The lines will be rendered using an XP Material. Drop such a material into the 'XP Material' link field.

A Sweep object will be generated automatically. You can set the radius of the line in the 'Line radius' setting.

This will render the lines with the Hair renderer (if your version of Cinema supports that). To use it, you must also drag a hair material into the 'Line hair material' field.

If your version of Cinema supports Sketch & Toon, you can render the lines using this option. Note that setting up S&T must be done manually: in the render settings, add the Sketch & Toon effect, and ensure that 'Splines' are checked in the 'Lines' tab.

Only used when 'Draw Connecting Lines' is set to 'Use Sweep Object'. The radius of the resulting line can be set here.

Only used when 'Draw Connecting Lines' is set to 'Use XP Material'. Drag the material to be used by the line into this field.

Only used when 'Draw Connecting Lines' is set to 'Use Sweep Object'. Drag the material to be used by the line into this field.

Only used when 'Draw Connecting Lines' is set to 'Use Hair Material'. Drag the Hair material to be used by the line into this field.