The Wave object generates wave-like motion in conjunction with any of the X-Particles fluid solvers, Fluid FX, PBD Fluid and the FLIP Domain. In the viewport the object appears like this: 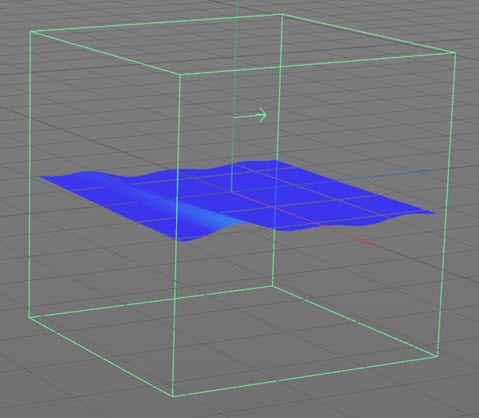 The wave deformation is shown by the blue plane and the direction of travel by the arrow.

Note that the fluid simulation must be enclosed by the yellow box which represents the wave solver for it to have an effect. 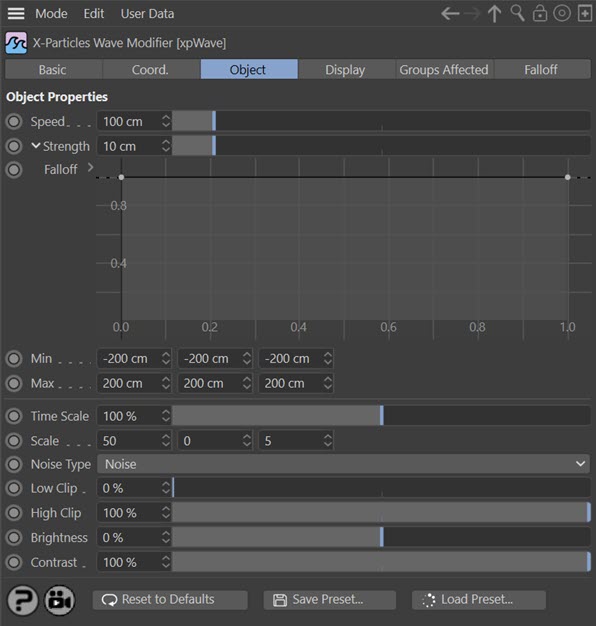 This is the speed of movement of the wave in the direction shown by the arrow in the solver.

The strength of the wave, which is directly related to the wave height.

To see this parameter, click the little arrow next to the 'Strength' label.

These controls can be used to set the size of the solver box. You can also use the six sizing handles on the box to resize it if you don't need to set a precise size.

This parameter controls the animation speed of the noise used to generate the waves. If it is set to zero, no animation occurs and the wave will not appear to move.

This scales the noise across the X or Z axes (the Y axis is not used). Increasing these values will have the effect of smoothing the waves out along that axis. Altering the Z axis scale effectively changes the wavelength of the waves. Reducing the X axis scale increases the chaotic behaviour of the wave.

This drop-down menu enables the selection of one of the standard noise types in Cinema 4D.

These controls clip the maximum and minimum wave heights. You may see flat plateaus on the top and/or bottom of the wave pattern if these are changed from their defaults.

This setting alters the brightness of the sampled noise, which will alter the strength of the effect. Unlike the 'Strength' parameter, this will raise or lower the height of all particles in the simulation. Be very careful with this setting, small changes are more effective than large ones.

Reducing the contrast will reduce the difference between peaks and troughs in the wave. If set to zero, there will be no waves at all. If it is reduced below zero, the wave pattern will be inverted.

This only affects the wave deformation display in the viewport. It has no effect on the final result. The options are:

The wave deformation is not show.

The deformation is shown as a series of lines, the length of the line representing the amount of deformation at that point.

As for the 'Line' display, but the arrow also shows the direction of deformation.

The deformation is shown as a solid object deformed by the wave. This is the default setting.

Instead of a solid plane, and grid is shown.

The deformation is represented by colour change on the surface of a flat (non-deformed) plane.

This gradient gives the colours used to represent the height of the deformation. The greater the height, the more the colour used moves towards the right-hand end of the gradient.

You can increase this value to see multiple examples of the deforming surface, should you need to do so. It has no effect on the final result.

This is also for visual display only. It determines the grid size used in the display. The higher the value, the coarser the grid (so for example, if you choose the 'Arrow' display type, increasing either value means you will see fewer arrows - but the effect on the fluid is unchanged.