This action gives you control over a MultiLevel Spawn Modifier.

The action behaves slightly differently to most other actions because it can set modifier parameters directly in addition to turning a modifier on or off. 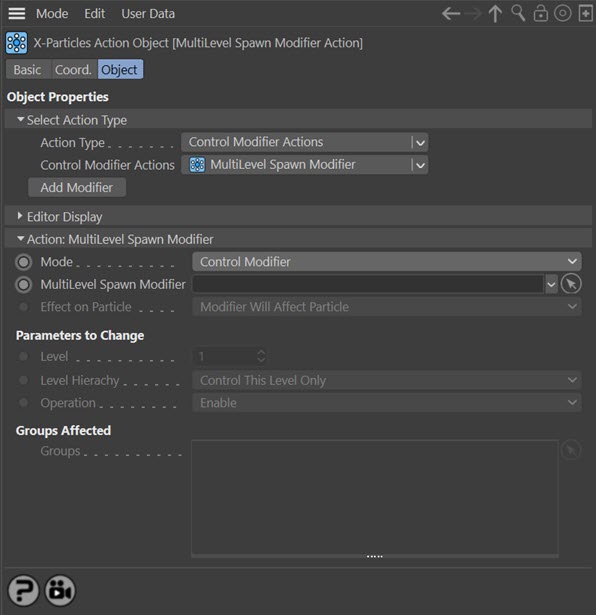 This drop-down controls the mode of operation of the action. It has two settings:

In this case the Action will let you control the operation of a Multilevel Spawn modifier in the scene, turning it on or off for specified particles.

With this option the action does not turn the modifier on or off but lets you enable or disable specified levels in the modifier.

This field accepts a MultiLevel Spawn modifier which you drag into the field from the Object Manager. Without a linked modifier, you cannot access any of the other parameters and the Action will have no effect. In addition, in the modifier's interface the Mode parameter MUST be set to 'Action-Controlled'. If it is set to 'Independent' the modifier will simply work on its own like any of the standard Cinema 4D modifiers and the Action will have no effect on it.

This is only available if 'Mode' is set to 'Change Modifier Parameters'. It sets the level in the modifier which will be controlled by the action. The effect on the level is determined by the 'Operation' setting.

This drop-down menu controls which levels are affected by the action. There are two options:

Control This Level Only

The action will only affect (i.e. enable/disable) the level given in 'Level'. All other levels are unaffected.

Control This and All Lower Levels

The action will affect the level given in 'Level' plus all lower levels in the hierarchy. That is, if you have three levels and you specify level 2 in 'Level' then with this option levels 2 and 3 will both be enabled or disabled but level 1 will be unaffected.

This drop-down menu controls how the action affects the levels in the modifier.

Important note: if you use this action to disable or enable a level, from then on you can only re-enable or re-disable it again by using another action. That is, the 'Enable Level' switch in the modifier will be ignored. You can make the modifier respond to that switch again by using the 'Release' option of this drop-down menu.

The menu has three options:

Once you use this action to enable or disable a level the level is controlled by the action and not by the 'Enable Level' switch in the modifier. To return control of the level to that switch use the 'Release' setting in this action, which releases control back to the modifier.