This modifier changes the speed of particles passing through it. 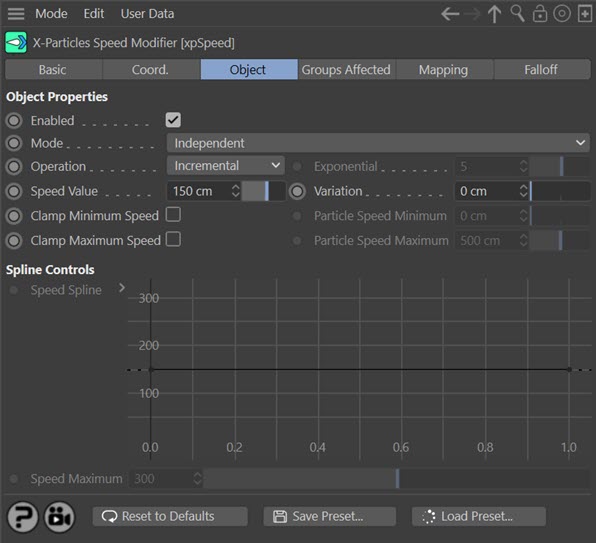 This drop-down has four settings:

With this option, the speed of the particles changes each frame by a value given in the 'Particle Speed Change' field.

This enables you to alter the particle speed over the lifetime of the particle by using the spline interface in 'Speed Spline'. The incremental value and clamp settings are ignored. The initial speed is set the by the Y value of the leftmost point on the spline. Also be aware that negative Y values will be clamped at zero.

In this mode, the only available control is 'Exponential'. This is a factor by which the speed is increased (or decreased, if 'Exponential' is negative) each frame. The difference from the 'Incremental' setting is that this is a multiplication factor instead of a simple increment. If the 'Exponential' value is negative, the particles will slow but never actually come to a halt.

This is the acceleration/deceleration value used if 'Operation' is set to 'Acceleration'.

As usual the actual speed change applied is influenced by the strength of the modifier falloff and for how long the particle remains in the modifier's field of effect.

In 'Absolute' and 'Use Shader' modes, this is used as the new speed of the particle.

This parameter enables you to introduce some random variation into the speed change.

This is useful if you want to slow a particle down but don’t want the speed to fall below a certain value. Check this switch then enter the required minimum speed in the ‘Particle Speed Minimum’ field.

This is useful if you want speed a particle up but don’t want the speed to exceed a certain value. Check this switch then enter the required maximum speed in the ‘Particle Speed Maximum' field.

Although you cannot set a point on the spline to be less than zero, the spline shape may make some points along its length have negative Y-values. These will all be clamped at zero (i.e. the particle will have zero speed).

When using this spline, you should be aware of one issue. Suppose the speed of the object is set to 150 in the emitter object but the leftmost point on the spline has a Y value of 75. What you will see is that for the first frame the object has a speed of 150, then in the next frame the speed immediately drops to 75. This is inherent in the way modifiers work - they are called after the initial particle generation - and the way round this is simply to ensure that the particle speed in the emitter is set to the same value as in the Y-value of the leftmost point in the spline.

By default the maximum Y value (i.e. speed) in the spline is 300. You may want the maximum speed to be higher than that. To do that, use the 'Speed Maximum' setting (you can reduce it as well, of course). This parameter is only available if 'Operation' is set to 'Use Spline'.