As its name implies, this action will let you manage a particle's speed. It can either affect particles directly, or by changing a Speed modifier in the scene. 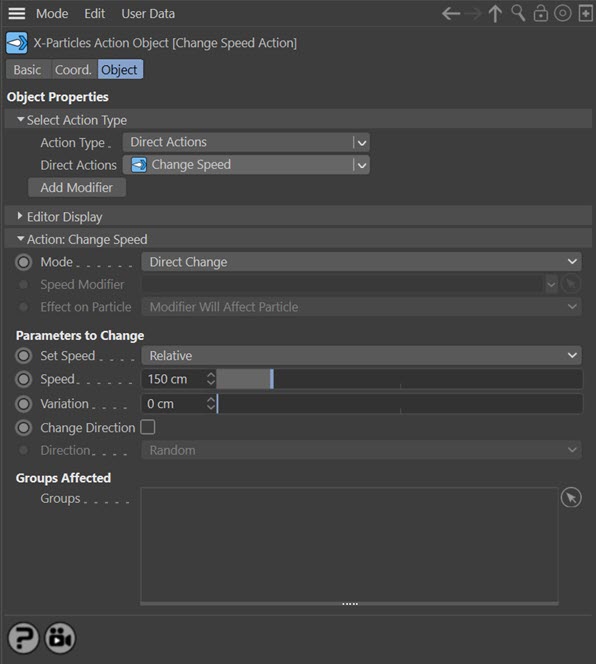 The Action will directly alter the particle speed. It does NOT require a Speed modifier. This lets you change a particle's speed at a precise point without having to work indirectly through a modifier, which can be a little convoluted for such a simple alteration. However, one potential disadvantage is that using this method will cause an abrupt speed change, rather than the smooth change you can achieve with a modifier as the particle passes through the field of the effect.

In this case the Action will let you control the operation of a Speed modifier in the scene.

This field accepts a Speed modifier which you drag into the field from the Object Manager. Without a linked modifier, you cannot access any of the other parameters and the Action will have no effect. In addition, in the modifier's interface the Mode parameter MUST be set to 'Action-Controlled'. If it is set to 'Independent' the modifier will simply work on its own like any of the standard Cinema 4D modifiers and the Action will have no effect on it.

The particle's new speed (absolute mode) or the increase in speed (relative mode).

A random variation of the speed given in the Speed field.

Check this switch to change the particle's direction, using the setting in the Direction field.

This drop-down can be used to change the direction of the particle. The available settings are:

You can use the Direction drop-down to change the particle's direction but that isn't it's primary purpose. The reason it is included is as follows.

The velocity of a particle consists of two things: the direction in which it moves and the speed with which it moves. Because of the way velocity is implemented in 3D calculations, setting the speed of a particle to zero will also remove its direction. A particle with zero speed will then have a 3D direction of 0,0,0 which means it is completely stationary; in addition, it cannot be given a speed unless it is also given a direction.

This is a problem because some of the modifiers in X-Particles can set the particle speed to zero. Or, you may want to set the initial speed of the particle when emitted to zero, then start it moving later. With a speed of zero, the particle is halted and no modifier will be able to move it. To get such a particle moving again, this Action is required. Once moving, it will be influenced by the particle modifiers as usual.

The Direction setting is therefore intended for use with particles which currently have zero speed. For changing the direction of already moving particles, it is recommended that you use the Direction modifier instead, as this will give you better control over the particle's direction.

Note: this Action can NOT be used to restart a particle which has been frozen with the Freeze tag or Freeze modifier! These objects do not set the particle speed to zero (although they can) but simply stop the processing of any particle movement. Do not try to use this Action to restart frozen particles, as it will have no effect.