This modifier can be used to reset, cancel or negate some existing flags and switches in the particles. For example, you can use it to unstick particles from the emission source object or from the new Sticky modifier. 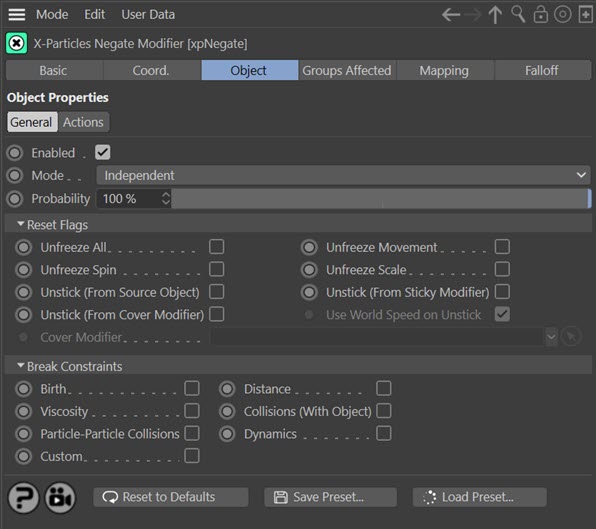 This value can be used to add some random variation to the modifier effect. It is the probability that the modifier will negate the selected options when the particle is within its field of effect. If set to 100%, the effect will always occur; if it is 0%, it never will.

You can use this modifier to turn off other modifiers. Drag the modifiers to be turned off into this list.

Note that the modifiers to be negated MUST be in action-controlled mode. Modifiers in independent mode will not be affected.

Use World Speed on Unstick

A particle can have two speed values. It always has its own inherent speed, which it is given when created, and which may be subsequently changed by modifiers or actions. If it is stuck to an object, this inherent speed is retained, and if the particle is unstuck, it will move with that inherent speed.

Using world speed can give a much better appearance on unsticking because the speed does not suddenly jump from that of the moving object to the inherent speed.

Note that the modifier only breaks existing constraints. It won't prevent new ones from being formed. For example, if you break distance constraints and the particle is still being affected by a Constraints object, the distance constraint may be immediately remade and it may appear as if nothing has happened. 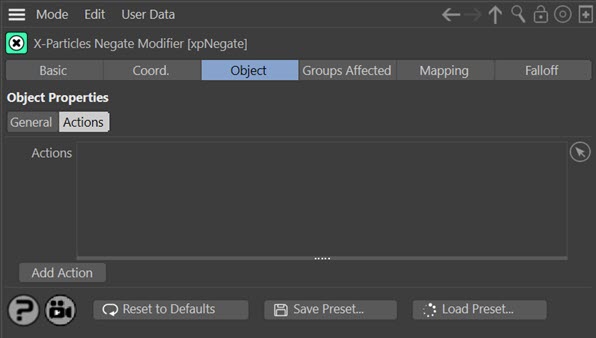 Note that the Actions will continue to be triggered as long as the particle remains affected by the modifier, so may be triggered multiple times for the same particle during scene playback.