This modifier kills particles or alters their lifespan. 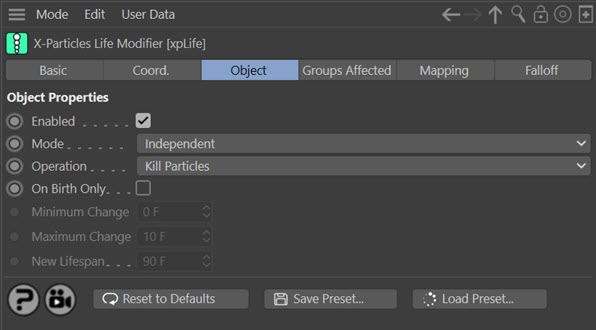 In this mode, the modifier will kill particles, that is, remove them completely from the scene. It operates in a similar fashion to the Destructor modifier in Cinema 4D, except that the probability of the particle being killed is dependent on the modifier falloff.

Here the particle lifespan will be changed but the particle will not be killed. There are two values which you can change: these are the minimum and maximum possible changes to the lifespan. For example, if the minimum value is 5 frames and the maximum is 10 frames the lifespan will change by at least 5 frames and at most by 10 frames. Again, this is influenced by the falloff and the maximum change will only occur within the ‘red zone’ of the modifier.

If this switch is checked, only newly-born particles will be killed. This is only available if 'Operation' is set to 'Kill Particles'.

What is the use of this switch? Suppose you have a scene where particles are emitted from a box emitter and Life modifier with a Capsule falloff is added. If the falloff is inverted, particles outside the capsule will be killed. If they then move outside it, they will also be killed like so:

If the 'On Birth Only' switch is checked, only newly-created particles are killed and if they move outside the capsule later, they are not destroyed:

These are the values used when 'Operation' is set to 'Increase (or Decrease) Particle Lifespan' or 'Set Lifespan Relative to Age'..