This is the heart of X-Particles and the reason it was written in the first place. It is intended to make control of the system more powerful than the standard Cinema 4D emitter without the complexity of a heavily Xpresso-based system like Thinking Particles. This section is an overview of how the control system works, but for full details of each object, please see these pages:

The control system comprises a number of objects. Two of these, the System object and the Action object, can be accessed from the X-Particles menu. The other object is the Question object but these can only be created from an emitter (in the emitter's Questions tab). 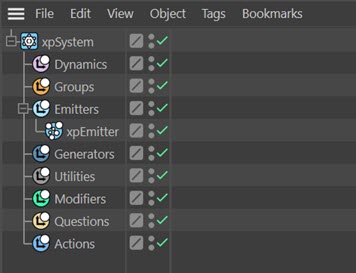 You can see several objects in the scene. As well as the System object itself, there are eight special null objects called Dynamics, Groups, Emitters, Generators, Utilities, Modifiers, Questions, and Actions as child objects of the System object.

The named null objects are there purely to keep the Object Manager tidy. You are NOT required to put your groups, emitters, generators, modifiers, questions, and actions into these nulls! If you add such objects by using the System object, they will automatically be put into the nulls for you. If you add the objects from the main plugin menu you can drop them in the special nulls yourself if you wish, or leave them elsewhere if you don't want to use the nulls.

You can use the individual object menus on the System object to add additional objects at any time, but you will need to move them into whatever link field or include list the setup requires. This may sound a little confusing at first, but it will become easier as you try the example scenes provided.

Note also that you can add multiple emitters to the scene, then use the same, or different, Questions and Actions for the different emitters. Different Questions can use the same Actions, which keeps the system flexible and avoids unnecessary duplication of objects.

You can also have more than one System object. By doing that, you can have multiple but completely separate systems in one scene, each with its own Questions, Actions, and if you wish, modifiers.

For the moment, just do the following:

Play the animation. You see that when each particle is over 30 frames old, it changes colour from the one it was created with to the colour you chose in the action. Changing these parameters, although they only affect the editor display, can be enormously helpful when setting up a complex system, since you can see which particles are being affected by an action and when.

How does it all work?

What X-Particles does is this: at each frame, every generated particle is tested against the question in the Question object. By default, the question is whether the particle age exceeds a certain time (the default setting is 3 seconds). If that question is true (i.e. the particle is indeed more than 3 seconds old) control is passed to each Action object in turn in the Actions list of the Question. You may only need one Question and one Action in your setup, but you can have as many as you like, and each Question may contain multiple Actions.

When the Question is active and it is tested and passed by a particle, it will then carry out all the Actions associated with it. Each Action will be carried out in turn. In the example above, all we did is change the colour of the particle in the editor, but there are a lot more possible actions than that.

For this simple setup all you see is a change in the particles in the editor. However, you can create more than one Question for each emitter; to make the emitter test the new Question, you must add it to the Questions list of the emitter. But how does X-Particles test these different Questions? And in what order does it do it? Details of this are provided in the reference section of the Question object.

That concludes this brief overview of the X-Particles control system.