In addition to the general preferences, X-Particles has several settings which are used on a project-wide basis. These can be found in Cinema's Project attributes, which you can see by pressing Ctrl-D (or Cmd-D): 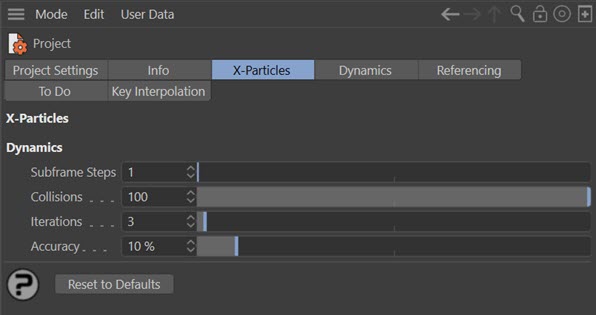 This value affects the Collisions, Fluids and Constraints (Multiphysics). Increasing the Subframe Steps divides each frame time into subframes, and this reduces the velocity per step that each particle is moved by. Subframes are also used by most modifiers to reduce the banding effect which is sometimes seen.

If you have fast moving or complex particle motion increasing the Subframe Steps will increase the accuracy of the Fluids, Constraints and Collisions. It is advised to only increase it a small amount as it can greatly affect your particle simulation result and drastically slow down the speed of simulation.

If you experience leaks from collisions, especially from rotating/moving objects or when particles are pinched between multiple objects, then increasing the Subframe Steps will help the collision engine resolve these cases more accurately.

The second use for this setting is to reduce the banding in the particle stream caused by some modifiers. Increasing this value can eliminate banding but will slow down playback, so you should keep this setting as low as possible to avoid too much speed reduction.

You can also increase this value to increase the accuracy/stiffness of dynamics/collisions and constraints.

Please see the Constraints object for further discussion of constraints solving in X-Particles.