This is a special object in X-Particles which creates 'lightning bolt' style effects. Unlike other X-Particles objects, it can be used with or without a particle emitter.

The object's interface includes these sections: 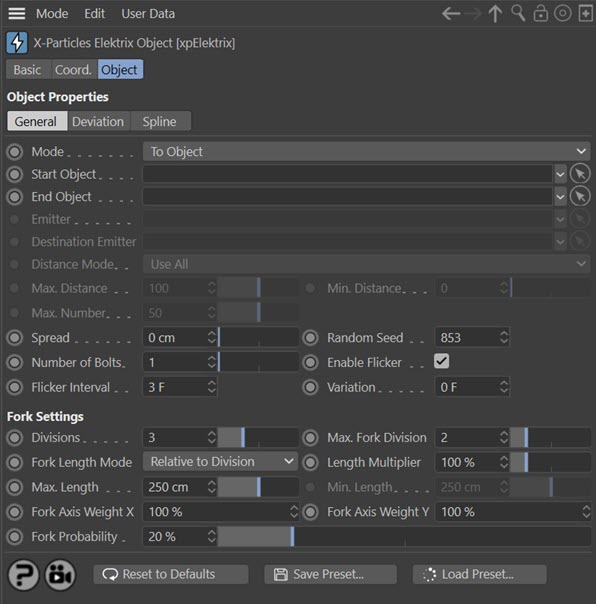 The Elektrix object has four modes of operation:

In this mode a bolt is drawn from the the 'Start Object' axis position to each particle emitted from an emitter.

The object the bolt originates from in all but 'Particle To Particle' mode. Drag the object to be used into this field.

The object the bolt ends at in 'To Object' mode. Drag the object to be used into this field.

The source emitter used in 'To Particle' and 'Particle To Particle' modes. Drag an X-Particles emitter into this field.

The emitter providing the 'destination' particles in 'Particle To Particle' mode. Drag an X-Particles emitter into this field. It cannot be the same as the first emitter; the object will not generate bolts if it is.

This drop-down menu is only used when 'Mode' is set to 'To Particles' or 'Particle to Particle'. It has the following options:

Bolts will be drawn to all particles. This is the same behaviour as in previous versions of Elektrix.

A bolt will only be drawn to the nearest particle.

Bolts will be drawn to all particles whose distance is between the values in 'Max. Distance' and 'Min. Distance'.

This is the same as 'All Within Distance' but the number of bolts is limited to the value in 'Max. Number'.

When 'Mode' is set to 'Max. Number Within Distance' this is the maximum number of bolts which can form.

This is the seed used when generating the bolts. If you don't like the result, try changing this value.

If checked, each bolt will randomly flick to another shape at intervals determined by the 'Flicker Interval' setting. If you don't want this to happen, uncheck this switch.

The time between shape changes in each bolt. Variation can be added with the 'Variation' setting to prevent too regular a result. Only available if 'Enable Flicker' is checked.

This controls the subdivision of the bolt. A value of zero simply generates a straight line between the two points. When set to 1, the bolt will be divided in two somewhere along its length, causing a bend in the bolt (see 'Deviation Mode' below). Increasing the count to 2 will divide each half of the bolt in two again. Each time the number of divisions increases, the number of segments in the bolt is doubled. The bolt will remain the same general overall shape, but the detail will increase significantly. A value of 4 - 6 is fine for most purposes.

Note that each time a division occurs a new point is generated in the spline which the object creates. At high division levels and with many bolts this can result in a lot of points!

As well as dividing the bolt segments in two at each division, the object can also produce forks or branches from the point of division. If you have 6 divisions you may end up with a lot of little forks, so this setting halts forking at the level of division in this setting. A value of 3 is usually sufficient. A value of zero will prevent all forking.

Note that this value can never exceed the value in 'Divisions'.

How long should a fork be? The default is that when a fork is generated, it is the length of the distance between the point it is generated from and the next point in the spline. As the bolt proceeds through the number of iterations (divisions) in the object, the distance between spline points gets shorter and shorter. The result is a few long forks and a larger number of small forks.

The alternative mode is that the fork has an absolute length in scene units. In this mode all the forks have a variable length between a maximum and minimum value.

This drop-down enables you to choose the mode to use.

This is the default mode where the fork length depends on the division level at which it is generated.

The alternative mode, in which the length is an absolute value in scene units.

Regardless of length mode, this value is used to multiply the fork length. All forks will then show a uniform increase or decrease in length. Note that, in 'Relative to Division' mode the length will still be clamped at a maximum value as shown in the 'Max. Length' setting.

In 'Absolute' mode, this is the upper limit of the length of the fork and is used in conjunction with the 'Min. Length' setting to determine the actual length.

Used only in 'Absolute' mode, this is the lower limit of the length of the fork. It is used together with the 'Max. Length' setting.

When the fork is generated it deviates from its parent along the X and Y axes local to the object. If both values are set to 100% the fork may deviate away at any angle. If you set the Y value (for example) to 0%, the fork will only deviate along the local X axis.

This the probability that a fork will occur at a division point. You can alter the value here to increase or reduce the chance of forking. Generally, smaller numbers produce better results.

These two settings are only available in 'Spherical' mode and control the length of the bolt. Variation can be added to the length with the 'Variation' setting. 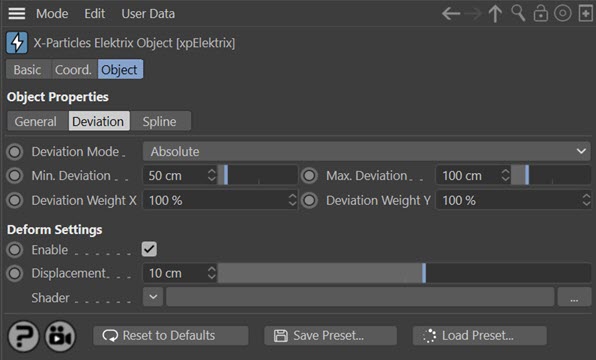 The amount of deviation is an absolute value in scene units.

The amount of deviation or bending at each division point. These are either in scene units ('Absolute' mode) or as a percentage of the bolt length ('Proportionate to Length' mode).

When the fork deviates from its parent it does so along the X and Y axes local to the object. If both of these values are set to 100% the fork may deviate away at any angle. If you set the Y value (for example) to 0%, the fork will only deviate along the local X axis.

These settings allow you to add additional deformation to the bolt with a shader. Best results are obtained with an animated Noise shader but any shader can be used.

If checked, the shader will deform the bolt.

This is the 'strength' of the deformation. Larger values will result in larger deformation. If it is too large you may see artefacts such as forks becoming detached from their parent branch.

Add a shader to this link field. A Noise shader is recommended as this can be animated and produce interesting effects.

This is a subset of the usual spline settings seen in Cinema 4D. Please refer to the C4D documentation for details. Cubic splines with Natural intermediate points can be used to produce curved bolts rather than spiky ones!