This modifier is similar in many respects to the original Spawn Modifier, but has some different features:

Please see the section 'Using the MultiLevel Spawn modifier' before using it for the first time. 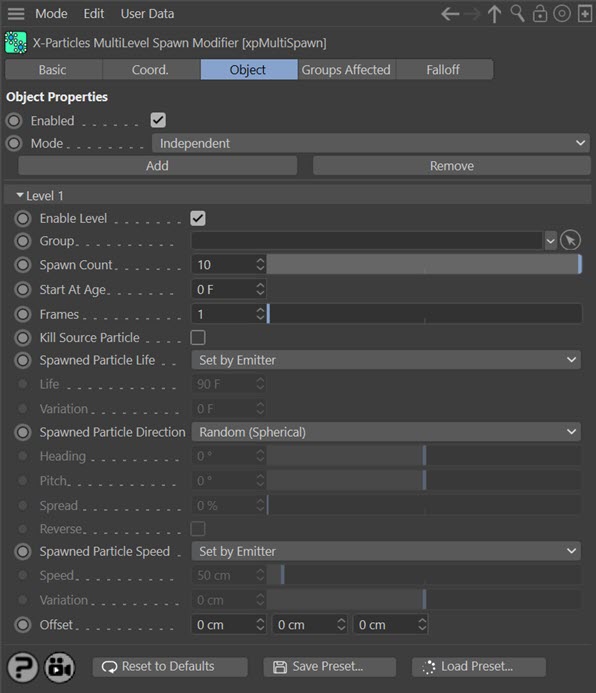 Click this button to remove the last level in the list. It is not possible to remove the very first level, as there must be at least one level for the modifier to have any effect.

Settings for each Level

If this switch is unchecked, the spawn level is disabled. Other levels, if any, will continue to spawn from any existing particles which were generated by the level that has been disabled. In other words, disabling level 1 does not disable level 2 spawning, etc.

You can drag a particle group object into this field and the spawned particles will be placed in that group. A different group can be used for each level if you wish, but you don't have to use groups at all if you don't need them.

Important: if the group uses the colour mode 'Gradient (Random)' or 'Gradient by Parameter' the group you drag into this link MUST be present in the Groups list of the emitter.

This is crucial, because when using a gradient the gradient itself has to be initialised and this can only happen if it is present in an emitter's Groups list. For any other colour mode the group does not need to be in the list but for both gradient modes, it does.

This is the number of spawned particles generated in this level each frame. It is suggested that you keep this count low (less than 10), especially in higher levels.

The number of particles in 'Spawn Count' will be generated for this many frames for each source particle, after which no more spawning will take place from that source particle.

The life of the spawned particles is that given in the emitter which generates the particles.

The life of the spawned particles will be the same as the source particle life.

You can specify the particle life by changing the values in the 'Life' and 'Variation' fields.

Only available when 'Spawned Particle Life' is set to 'Set Life'. The 'Life' field contains the new life value, and a random value within the range given by the 'Variation' parameter will be added to or subtracted from the 'Life' value. Note that if the result is zero or less than zero, the spawned particle life is set to 1 frame.

This is how the direction of the spawned particles is determined.

In this mode the direction of the new particles is the same as the source particle (but can be modified by the 'Heading', 'Pitch', 'Spread' and 'Reverse' settings - see below).

With the Custom mode selected, you can access the Heading and Pitch settings and give the spawned particles any specific direction you like. The direction is the direction in 3D world space, not object space.

The 'Reverse' setting, if checked, will reverse the direction of the spawned particles so that instead of following along the path of the source particle they head directly away from it (useful for rocket trails, for example).

There are four settings in this drop down:

With this option, the spawned particles will have the speed given in the emitter which generates the particles.

In this mode the spawned particles will have the same speed as the source particle.

With this option you can specify the speed of the spawned particle in the 'Speed' and 'Variation' settings.

The 'Speed' field contains the new speed value, and a random value within the range given by the 'Variation' parameter will be added to or subtracted from the 'Speed' value. Note that if the result is less than zero, the spawned particle speed is set to zero.

What this modifier does is to spawn particles from each particle in the level above it. For example, suppose you have three levels and in each of them the 'Spawn Count' is set to 10 and 'Frames' is also set to 10.

Let's also assume the emitter is set to emit a shot of just one particle.

Now from that original particle in the emitter, the modifier will spawn 10 new particles - these are the 'level 1' particles. This will give you a total of 11 particles after one frame.

The moral here is to be very careful with this modifier!

Keep the number of levels as low as possible and the same with the spawn count and number of frames to spawn for. Also keep the lifespan of the spawned particles short so huge numbers of them don't accumulate.

You might also want to play the animation frame by frame at first, to ensure you don't come to a halt with a massive number of particles at some point in your animation. Properly used this modifier can be used to create such things as sparks from fireworks and so on, but it can bring your computer to its knees if you aren't careful.