This modifier affects particle trails, to shrink or grow their length. It is a more flexible option than using the Trails Action to shrink the trails.

Important: this modifier will ONLY work on ordinary trails using the 'No Connections' algorithm in the Trail object. It does not work on any of the connected trails.

Please see the section 'How to use the Trails modifier' at the foot of this page before using the modifier for the first time.

For the 'Groups Affected' and 'Falloff' tabs and for the buttons at the bottom of the interface, please see the 'Common interface elements' page. 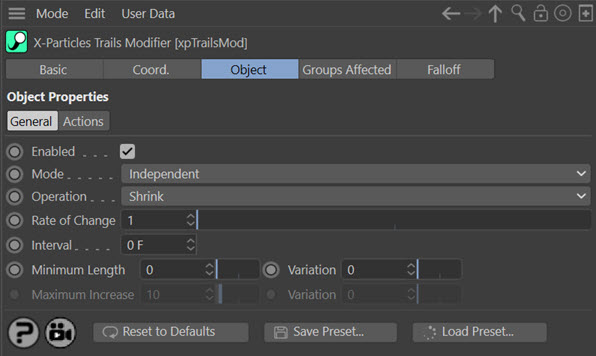 The operation the modifier will carry out. The drop-down menu has three options:

The trail length will be reduced. The speed at which it is shrunk is governed by the 'Rate of Change' and 'Interval' parameters, and the minimum length it will shrink to by the 'Minimum Length' parameter.

The trail length will be increased if it was previously shrunk by the 'Shrink' method. It will be expanded again back to its original length. If the trail was not previously shrunk, this setting will have no effect.. The speed at which it is grown is governed by the 'Rate of Change' and 'Interval' parameters, and the maximum length it will grow to is the maximum length of the trail as determined by the Trail Object.

With this option the length of the trail will be increased even if not previously shrunk. The maximum by which the trail will increase in length is controlled by the 'Maximum Increase' and 'Variation' settings. If you want the trail to grow as long as it remains in the modifier's field of effect, set the 'Maximum Increase' value to a high number which can't be exceeded in the length of the scene.

Note: this option will only work if in the Trail object the 'Length Mode' setting is set to 'Time'. It will have no effect if set to 'Length'.

In this mode the trail length will pulse up and down, so it will get shorter, then longer again, then shorter, and so on.

The time interval between each change in length. Larger numbers result in slower changes. For example, if this value is set to 3 frames, the length of the trail will be increased or decreased once every 3 frames.

If 'Operation' is set to 'Shrink' or 'Pulse' this is the minimum length the trail can have. In this case the length is determined by the number of points in the trail spline, so zero points will result in a zero length trail.

These settings control how much a trail will increase in length when 'Operation' is set to 'Grow'. See the 'Grow' option above for more details. 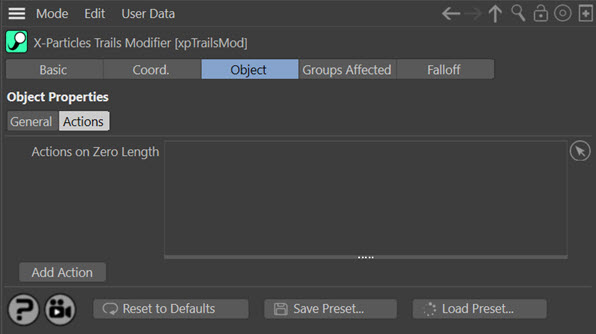 These are the actions which will be triggered when a trail reaches a length of zero. Please see the section 'Using the Trails Modifier' for more details of how this works, as it is different from the Trails Action.

To use this modifier, it is important to understand how it alters the trail length. Each trail is a spline made up of a series of points with each point representing a sample of the particle position. Suppose a trail spline has 30 points. When this modifier shrinks the trail, it does so by constructing the spline from a subset of the total available points. The points themselves can be added to the spline again later, allowing the trail length to be expanded again.

Therefore the 'Rate of Change' parameter does not represent time or actual scene units. It is the number of trail spline points by which the length is changed. This is the case with the 'Minimum Length' and 'Maximum Increase' settings as well.

From this there is an important aspect to note: the modifier works best on trails with a fixed length. If you have a trail with 30 points, you can shrink it down to zero points (and therefore zero length) and expand it back to 30 points long if desired. But if the trail is set to a full scene length trail, then each frame the trail will grow longer by one point (assuming the 'Frame Sampling' parameter in the Trail object has been left at the default of 1) and if you shrink it by 1 point each frame, nothing will happen: the trail will not grow any longer, but it will not shrink, either. You can, of course, alter this behaviour by changing the 'Rate of Change' parameter in this modifier, or by altering the 'Frame Sampling' parameter in the Trail object.

For smooth changes in length it is recommended that you keep the 'Rate of Change' parameter at a value of 1. Higher values may lead to jerky or flickering effects because the length is changing rapidly. This is particularly visible with fast-moving particles because the faster the particle, the longer the trail and the more noticeable changes in length will be.

Trails with a length of zero

The most frequent use for this modifier is to shrink existing trails. You can also do this by using the 'Trails Action' but the two methods are fundamentally different.

When you use the Trails Action, the trail stops growing and is reduced in length by deleting unwanted points. This is not reversible: the trail cannot grow again and cannot be regrown back to its original length.

The Trails Modifier is non-destructive. The trail stops growing but instead of deleting points, the index into the array of existing points is changed. This means that the trail can be restored to its original length if desired.

If you want to trigger actions when the trail length is reduced to zero by using this modifier, the 'Particle Trail' question will not work. Instead, simply drag the desired actions into the 'Actions on Zero Length' list. They will be triggered when the trail has zero length on screen.