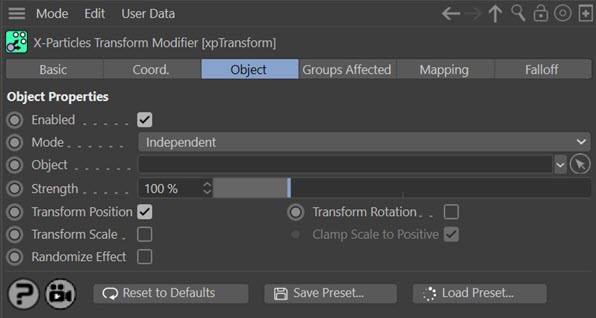 Drag the object to be linked to the particles into this field. If the field is empty, the modifier will have no effect.

You can adjust how much of the object's movement is translated into particle movement with this slider. If it is set to 100%, the particles will move the same amount as the object. A setting of 0% effectively prevents any action.

These switches allow you to set which changes in the object are carried over to the particle. By default, only position is checked.

A scale with a negative value can have undesirable effects. To prevent this, the scale will always be clamped to a positive value, no matter how much the source object's scale is transformed. For example, if the source object scale on the X-axis is changed to -1.3, the particle scale will be set to +1.3.

If this switch is checked, after calculating the new position (or scale or rotation) of the particle, it will be randomised to between zero and the calculated value. This lets you produce a more natural-looking effect.