This action either lets you halt the movement, spin, or scaling of particles directly, or gives you control over a Freeze modifier in the scene. 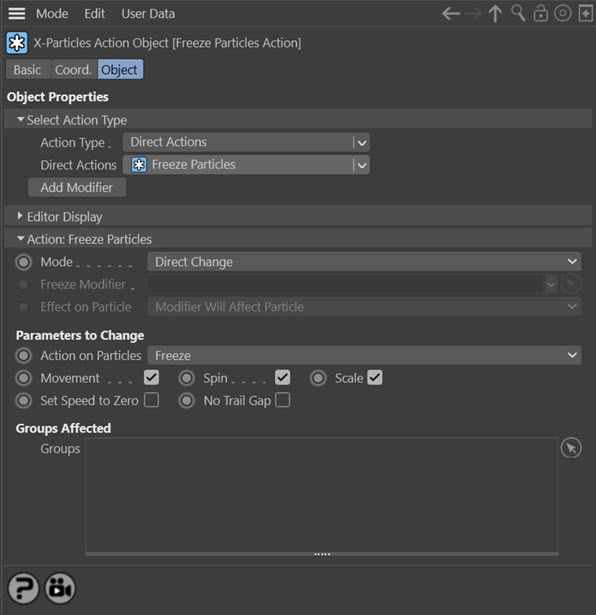 The Action will freeze the movement, spin, or scaling of the particle directly. It does NOT require a Freeze modifier. This lets you halt or restart a particle at a precise point without having to work indirectly through a modifier, which can be a little convoluted for such a simple alteration.

In this case the Action will let you control the operation of a Freeze modifier in the scene.

This field accepts a Freeze modifier which you drag into the field from the Object Manager. Without a linked modifier, you cannot access any of the other parameters and the Action will have no effect. In addition, in the modifier's interface the Mode parameter MUST be set to 'Action-Controlled'. If it is set to 'Independent' the modifier will simply work on its own like any of the standard Cinema 4D modifiers and the Action will have no effect on it.

The Action will freeze the particle (bring it to a stop).

The Action will unfreeze frozen particles and they will start moving again. If a particle is not frozen then the Action will have no effect on it if this mode is selected.

Check these buttons to specify which parameters are frozen/unfrozen. For example, you can choose to stop a spinning particle from moving but keep spinning, or halt any change in scale but keep the particle moving. If no buttons are checked, the Action will have no effect.

When a particle is frozen, it keeps its current speed value, although it cannot be moved. If it is unfrozen again, it will move with the speed and direction it had before it was frozen. Occasionally this is a problem; suppose you test a particle for speed in a Question object, then you might expect a frozen particle to have a speed of zero, but it may not. If it is important that any frozen particle also has its speed set to zero, check this switch.

Sometimes, if you are generating a trail from a particle and you freeze the particle, the trail may not extend right up to the frozen particle, leaving a gap. This might not matter, but if it does, check this switch.

(This happens due to Cinema 4D's priority system, which forces certain events to take place before others. In this case, freezing a particle will stop the trail from extending in length but will only stop moving the particle after it has moved the distance it would move in that frame - this is why the gap appears. You can see more about priorities on this page.)