This action will 'unstick' particles emitted from a source object and which were stuck to the object on emission. 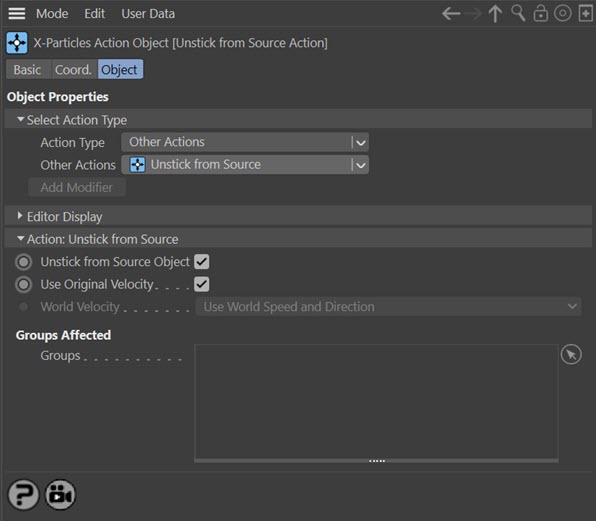 The interface is extremely simple and only has this one setting. If a particle was stuck to its source object on emission (see the Emitter object for details) then it will remain stuck until unstuck by this action.

When a particle is stuck to its source object on emission, it will still have a velocity (speed and direction) given to it by the emitter. The particle is not moved with this speed/direction because it is stuck, but once it is unstuck due to this action, it can move again with that velocity.

If this switch is checked, the particle's original velocity is used.

If it is unchecked, and if 'World Speed' was enabled in the emitter's 'Extended Data' tab, the world speed and/or direction are used instead.

If 'Use Original Velocity' is unchecked, this parameter becomes available. There are three options:

Use World Speed and Direction

The particle is given the world speed and world direction.

The particle is given the world speed but keeps its original direction assigned by the emitter.

The particle is given the world direction but keeps its original speed assigned by the emitter.

All these options require that 'World Speed' is enabled in the emitter's 'Extended Data' tab. If it is not, the original speed and direction is used (same as if 'Use Original Velocity' is checked).