Here is an example display of the vectors from a Rotator modifier: 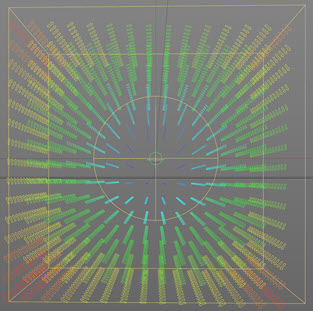 Note that only a subset of modifiers produce a vector display. Some cannot do so, because of the way they work. Those which do produce a display are as follows:

Other modifiers do not affect the velocity (that is, they only affect speed or direction). This means that with some modifiers certain conditions must be met to show a display, i.e. the velocity must be changed, which isn’t always the case. 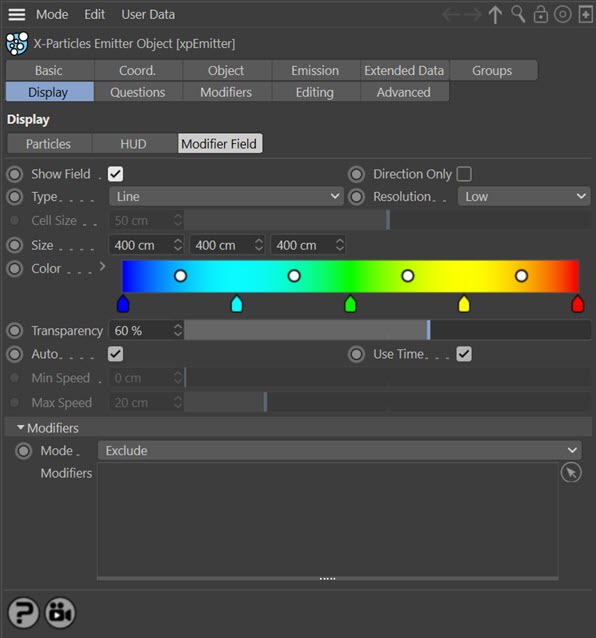 Check this box to display the modifier field vectors.

Note that this does not apply if 'Type' is set to 'Dot' since the size of the dots cannot be changed.

This drop-down menu controls the vector display. The options are:

The vectors are shown as small dots. With this type, the vector direction cannot be seen but the effect on speed is denoted by the colour.

The vectors are shown as thin lines.

The vectors are shown as arrows. This is the default setting.

Preset values for the resolution. The default setting is 'Low' which is often good enough for most purposes.

With this option you can choose your own resolution by changing the 'Cell Size' parameter.

Use this parameter to determine the display resolution when 'Resolution' is set to 'Custom'.

These are the lower and upper limits of the display field respectively. Note that if the modifier has a falloff other than 'Infinite' then the vectors are only shown within the falloff area. Also, that if the falloff area is outside the field boundary, no vectors will be shown.

The colours from this gradient are used to colour the vector display according to the effect the modifier would have on particle speed. As the speed change increases, the selected colour moves towards those from the right-hand end of the gradient.

You can change the transparency of the displayed vectors with this parameter.

Note that the speed change values may be surprisingly small. For example, with a Turbulence modifier, if you uncheck this switch and leave the 'Min Speed' and 'Max Speed' settings at their default values, you will see the vectors disappear. This is because the actual changes are very small - typically in the range 0 to 3.5. So you may need to change the min/max settings quite radically to see the vectors if 'Auto' is unchecked.

Very occasionally it may not be possible for the emitter to calculate the min/max values automatically and you will have to uncheck 'Auto' and set these values manually. The Vortex modifier is an example of this.

In some cases, if a modifier parameter is animated the vectors may change from frame to frame. If this switch is checked, the vector display will be updated when the vectors change. Since the continual redrawing of the vectors can slow down playback, unchecking this switch will turn the display update off.

The minimum and maximum values to use if 'Auto' is unchecked.

If the drop-down is set to 'Include' only those modifiers in the list will be included in the display.

The list of modifiers to include in or exclude from the vector display. You can use this to specify exactly which modifier will be used to show the modifier vectors.