The Sticky modifier will stick particles to an object and move them with the object if it moves, rotates, etc. This is an example of the modifier in action, sticking particles to two primitive objects. An action changes the particle colour when they stick: 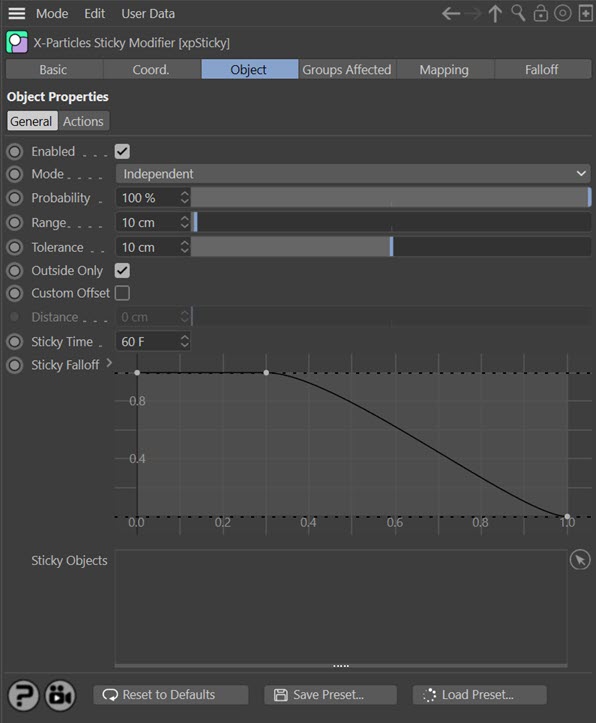 This is the probability that a particle will stick to an object if it comes within range. If it is set to 100% the particle will always stick; if it is 0%, it never will.

This setting determines how far away a particle must be from an object to stick to it. Its purpose is to screen out all particles which are too far away to potentially stick to the object. If this is set too high, the number of particles which must calculate a sticking point on the object will increase and may slow down the system.

As a general rule the default value is a good compromise. If the particles and/or objects are moving very slowly, you can reduce this value, but if they are moving very fast you may need to increase it, since then there is the possibility that a particle may pass by an object without coming into range.

Drag the objects you want to stick the particles into this list. They can be polygon objects or parametric objects which would be polygonal if made editable. Splines will not work.

If this switch is checked, particles will only stick to the outside of the object. In some cases this may cause some particles to be missed and not stick to the object. If this happens, try increasing the range and/or tolerance values, but keep the increases to a minimum, because if you increase them too much, you may stick particles which are further away from the object than you would like.

Check this switch to offset the sticking point of the particles from the object surface. The amount of offset can be set in the 'Distance' parameter.

Only available if 'Custom Offset' is checked. It controls the offset distance from the surface.

This is the maximum time for which particles will remain stuck to the surface. At some point after being stuck, they will start to become unstuck again. When that happens depends on the 'Sticky Falloff' spline.

If you don't want the particles to unstick at all, set this time to a very high value or change the 'Sticky Falloff' to a flat spline.

This spline controls when particles may start to become unstuck from the object. It is best explained with an example.

Suppose a particle sticks to an object when it is 50 frames old, and the 'Sticky Time' is set to the default 60 frames. From then on, a value will be returned from the spline at a point ranging from zero frames on the left to 60 frames (the maximum sticky time) on the right. The particle randomly tests that value and as it decreases there is an increasing chance that the particle will unstick, so that by the time 60 frames are up, the value from the spline is zero and the particle will always unstick.

You can see now that if you set the spline to this:

The particle will never unstick because the value from the spline is always 1. 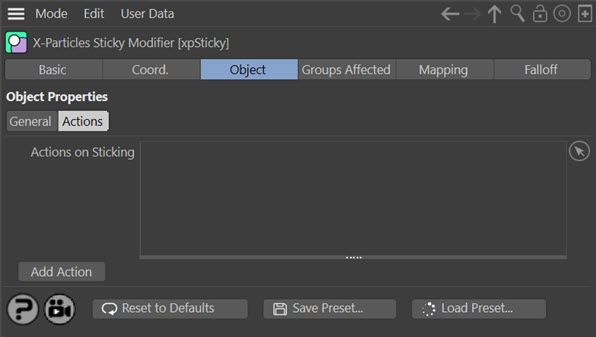 When a particle sticks to an object, this will trigger an action.

Drag the actions you want to be carried out into this list.