Brief details on using this object can be found below. See also the Fluid FX object for a second fluid simulator in X-Particles.

Foam is controlled in a separate object, the X-Particles Foam object.

Note that this object governs the behaviour of the fluid; to create a mesh from the particles you will need an OpenVDB Mesher or a Skinner object. 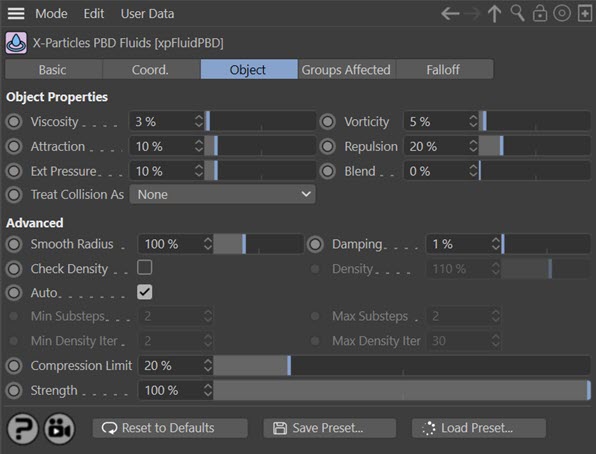 When considering these parameters, it may be helpful to show short video demonstrations of what they can do. For reference, here is a simple setup with the PBD Fluid object parameters at their defaults:

This sets the fluid simulated viscosity. However, this isn't "true" viscosity, it is an approximation. It adds the velocity influence of the surrounding particles, which gives a more viscous motion. To make a really viscous fluid it might help to add some particle-particle attraction.

You may need to increase this value quite markedly to see significant changes. Here is the reference scene with Viscosity set to 300%:

This increases the curl of the particles motion by adding back in any vorticity already present in the fluid. This will gives a more swirling and turbulent motion. If your fluid needs added vorticity then this can be added using Curl Turbulence (see the Turbulence modifier).

The vorticity in this scene has been increased to 100% and you can see the added turbulence it introduces:

This causes this fluid particles to pull together giving an attraction much like surface tension. You might think this leads to a smoother, more coherent particle stream, but in fact it is attracting particles into clumps, causing the stream to break up. This is the effect with attraction set to 25%:

Causes the fluid particles to be push away from each other to force them to spread out more. This can be used to help to reduce particle clumping when only a few particles are close by. In this video repulsion has been increased to 100%:

This is a factor applied to the particles to prevent them from breaking up into lots of tiny clumps. The effect is to simulate an increase in surface tension which pulls neighbouring particles together. In this video the pressure has been increased to 100%:

If you have more than one emitter, representing two different fluid simulations, this setting will mix the particle colour with that of its neighbours, to simulate the effect of liquids mixing. Increase the value to increase the degree of mixing.

This menu determines what will happen if collisions occur between particles. It is added for use with the new X-Particles dynamics engine and can be used to generate particle to particle collisions, which normally do not occur within fluids. The options are:

The default setting. No collisions are generated. This is the same behaviour as in previous versions of X-Particles.

The radius over which the properties of the fluid are smoothed (such as density). When this is reduced the smoothing effect is reduced and the result is more chaotic, as seen in this video where the radius is set to 50%:

The degree of damping required is small. By default it is set to 1%, and older scenes imported into the new version will see this value automatically set to 1%.

This setting is off by default. Occasionally (for example, with slow-moving particles on emission) you may need to turn this on,

The minimum and maximum number of substeps used in the simulation. These are only available if 'Auto' has been unchecked.

The substeps help with general motion and make the simulation more accurate.

The minimum and maximum number of iterations used in the density calculations. These are only available if 'Auto' has been unchecked.

The iterations ensure that the particle distribution enforces the fluid density, keeping the fluid volume (as fluids should be incompressible).

This is the maximum loss of fluid volume in percentage terms. If you increase it, fewer iterations are required but the amount of bouncing and elasticity increases, which may not be desirable. Smaller values require more iterations (so the simulation is slower) but reduces the bouncing/elasticity effect.

Within a fluid solver there constraints between the fluid particles, controlling the degree to which particles can be moved by the solver. This setting controls the strength of the constraint. If you increase it may reduce the number of iterations required to complete the solve, which would speed up the solution, but could result in instability. If it is decreased it would result in more iterations, so reducing the strength can be useful if the fluids explode during the simulation, as it reduces the force acting on the particles.

How to use the PBD Fluid Object

The PBD Fluid object is similar to a particle modifier so you need an emitter to generate the particles.

This means that you can treat the object as you would any other modifier. For example, you can drop the PBD Fluid object into an emitter's include/exclude modifiers list if you need to.

Note that emitting from an object is significantly slower than standard emitters, so should be avoided wherever possible. You can emit from 'solid' emitters such as the sphere, cylinder or box emitters if you need to.

You can use other modifiers in conjunction with this object, such as a Gravity modifier, or other dynamics objects such as the Constraints object. If you want the particles to collide with a an object, use a Collider tag in the usual way. The PBD Fluid object simply governs the behaviour of the particles to make the particle flow seem more fluid-like.