This modifier works in conjunction with the Generator to morph objects from one to another.

Before using this modifier please see the page 'Morphing generated objects' which contains details of how to carry this out.

For the 'Groups Affected', Mapping', and 'Falloff' tabs, and for the buttons at the bottom of the interface, please see the 'Common interface elements' page. 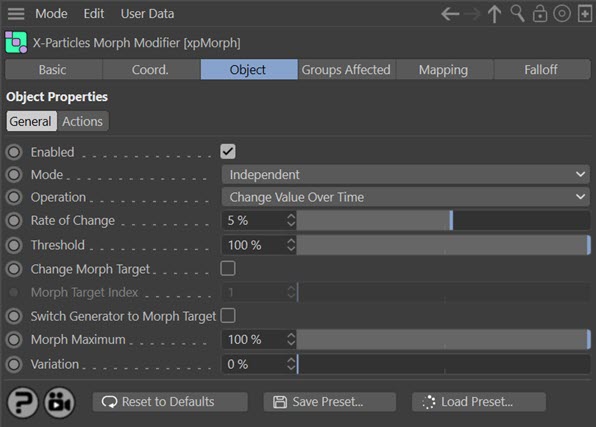 This drop-down menu controls the operation of the modifier. It has two options:

This is the default method and is the same as in previous versions of X-Particles. The rate at which the object changes shape is controlled by the 'Rate of Change' setting.

In this mode the modifier simply sets the morph value but does not change it over time. When this is selected, the 'Rate of Change' setting is removed and a new setting, 'Morph Value' appears. You can use this mode to control the 'Morph Value' using data mapping.

Only available if 'Operation' is set to 'Change Value Over Time'. This is the rate at which the generated object will be morphed, in a percentage change per frame. The final amount of morphing will depend on the 'Morph Maximum' setting.

Only available if 'Operation' is set to 'Set Value'. This is a percentage value representing the amount of change between shapes. The actual value which can be set is governed by the 'Morph Maximum' setting.

You should note that in some cases where the X-Particles sub-frame count is greater than 1, a threshold value of 100% may cause the morphing to fail. This is because, due to arithmetical rounding errors, the falloff value may sometimes be lower than the threshold. If increasing the sub-frame count causes morphing to stop working, or to work more slowly than in should, try reducing the threshold a little. Usually a reduction of 1-2% is sufficient.

If checked, this will allow you to change the value of 'Morph Target Index'.

The Generator object sets the morph target for each particle, but the morph modifier can alter this by changing this value, so the object will morph to a different target object.

Set this to the index of the object in the Generator's 'Morph Targets' list you wish to morph to. This starts at 1 (the first object in the list). It is up to you to make sure that the index is a sensible one. If you set it to '3' and there are only two morph targets in the list, no morphing will occur.

The use of this switch is explained on the page 'Morphing generated objects'. Please refer to that page for details.

This is the maximum amount of morphing that will take place; variation between particles can be added with the 'Variation' setting. If 'Morph Maximum' is set to 100%, the modifier will morph the generated object completely into its morph target. Any smaller value will result in an incomplete morph. This can be very useful if you need to see some variation in the amount of morphing which is occurring, e.g. a flower opening: not all flowers will open to the exactly the same degree. 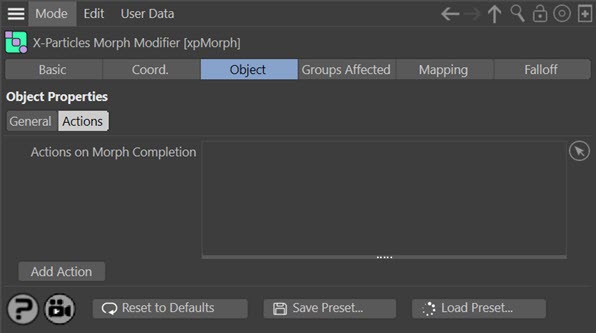 This section determines what happens when the morph is complete - i.e. when the amount it has morphed reaches the 'Morph Maximum' value.

Any Actions dropped into this list will be triggered on morph completion.