This object implements a circle-packing routine which will pack as many particles into a defined space without them overlapping. This enables images such as this to be produced (a simulated Ishihara test for colour-blindness): 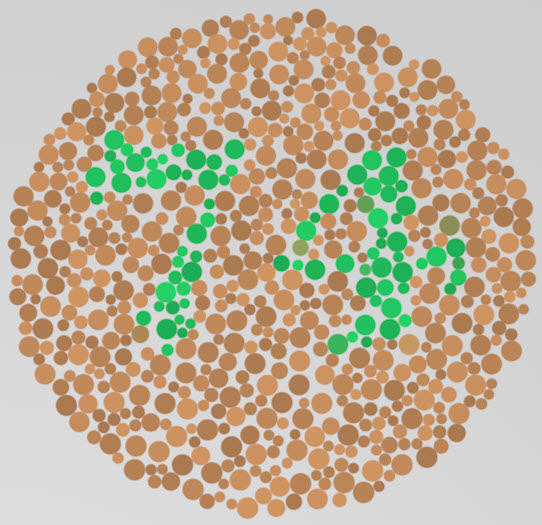 The object uses an emitter which generates the particles, then resizes them to fit into the space available at the particle's position. If there is insufficient space the particle is deleted. Also see the notes on using this object below. 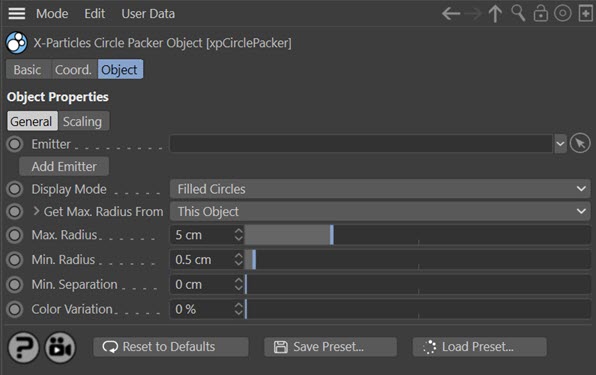 The emitter to use. When you drop an emitter into this field, the following changes are automatically made to it:

You can change any of these if desired, but the packing effect is best seen with circles of some kind - filled, outline, or sphere. You can change between those from the 'Display Mode' drop-down menu. If you want to change the maximum number of particles, you can do so in the emitter or with the 'Max Particles' parameter.

The particle display mode used in the editor. The menu offers the choices of circle, filled circle, or sphere. These are exactly the same as the options in the emitter's Display tab; this menu can be used instead, for convenience.

Get Max. Radius From

This determines where the maximum particle radius will be obtained from. The default is 'This Object' meaning that the maximum radius is controlled by the 'Max. Radius' setting; in this case, the initial radius given to the particle by the emitter is ignored.

The other option is 'Particle'. The maximum possible radius is then determined by the particle's initial radius setting. The circle packer may reduce that radius to make the particle fit, but it will never increase the radius. With this option you can (for example) set the initial radius from a texture and the circle packer will try to keep the radius as close to that value as possible.

If you set this menu to 'Particle' you have additional options which can be seen by clicking the little arrow next to the text 'Get Max. Radius From'. These options allow you to alter the radius of the generated particle before the Circle Packer fits them into place.

The options are shown here:

The way this works is as follows:

The spline which affects the value of the 'Scale Multiplier' depending on the existing particle radius.

The maximum particle radius to set. Only available if 'Get Max. Radius From' is set to 'This Object'.

The minimum particle radius. The circle packer will try to fit the particle into the position at which it is generated and if necessary will reduce the radius until it fits. However, if the final radius is less than this value, the particle will not fit and will be deleted.

Normally a new particle will be touching at least one other existing particle. You can set a slight gap between them by altering this value - this can sometimes look nicer than the particles touching. It is recommended that this value is kept small (e.g. 0.25 screen units) for best results.

Note that this parameter is not applicable when scaling particles up or down. This is because the particles are constantly changing radius and it is not possible to calculate the distance between them accurately.

By default this is set to zero, so the particles will retain their original colour. Increasing this value will add some variation into the colour; the Ishihara image shown at the top of this page was generated by emitting from a bitmap with only two colours but with 15% colour variation. 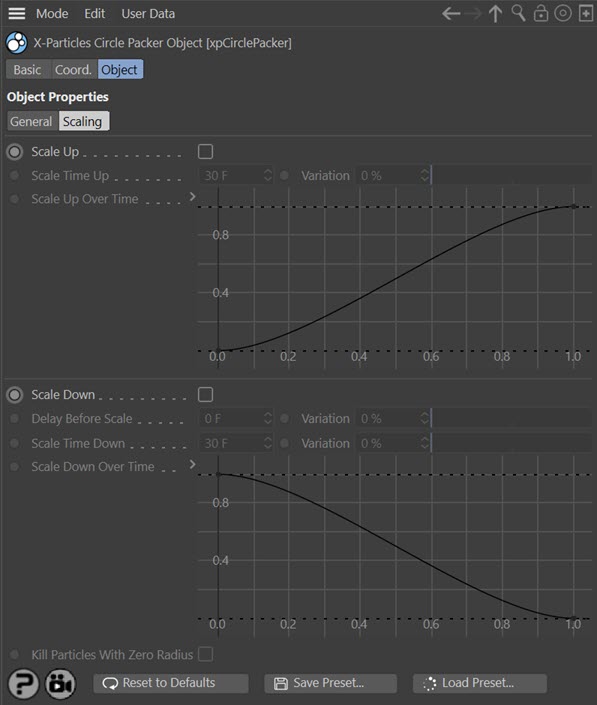 The Circle Packer can scale particles up and down, and the change in radius is controlled by spline controls so allowing the changes to ease in and out. The available controls are as follows.

If checked, the circle packer will set the initial particle radius to zero then scale it up over time to the maximum possible value for that particle. The time taken to scale up to its maximum is determined by the 'Scale Time Up' setting.

By increasing this value above zero there will be some variation in the rate at which particles scale up. So if 'Scale Time Up' is set to 30 frames and 'Variation' to 10%, the actual scale time for each particle will be somewhere in the range 27 to 33 frames.

Scale Up Over Time

This spline controls how the particle radius scales up. The default spline will scale up the radius from zero to the maximum for the particle, over the time set by the 'Scale Time Up' and 'Variation' settings.

Note that if you flip the spline, the particles will start at the maximum radius and scale down to zero. However, they are not deleted when the radius is zero so if you do this you may end up with a lot of invisible particles. In addition, they are not removed from the internal list of circles maintained by the Circle Packer so new particles will not be generated to replace them.

Also note that if you set the spline to a straight line at the top of the control, the particles will not scale up at all, but will immediately take their maximum radius, which is identical to not checking the 'Scale Up' switch in the first place.

If checked, the circle packer will scale the particle radius down over time to zero. The time taken to scale down to zero is determined by the 'Scale Time Down' setting.

Delay Before Scale and Variation

The time taken for a particle radius to be scaled down to zero, if 'Scale Down' is checked. Note that a setting of zero will cause the particle to be scaled to zero radius immediately.

By increasing this value above zero there will be some variation in the rate at which particles scale down. So if 'Scale Time Down' is set to 30 frames and 'Variation' to 10%, the actual scale time for each particle will be somewhere in the range 27 to 33 frames.

Scale Down Over Time

This spline controls how the particle radius scales down. The default spline will scale down the radius to zero, over the time set by the 'Scale Time Down' and 'Variation' settings.

Note that if you set the spline to a straight line at the top of the control, the particles will not scale down at all, which is identical to not checking the 'Scale Down' switch in the first place.

When scaling down, you may end up with particles which have a radius of zero; they still exist, but you cannot see them. In addition, they are not removed from the internal list of 'occupied' circles maintained by the Circle Packer, so no new particles are generated to replace them. To avoid this, check this switch. Particles with zero radius are then deleted and new ones will be generated to replace them.

Notes on using this object

You can use the circle packer when emitting from an object, so you can use all the modes available there, but polygon centre and points modes are not very useful. Best results are obtained with polygon area or texture emission.

Be aware that the object will delete any particles which can't be fitted into the space at the point where they are generated. This has an effect on the number of generated particles, which becomes more and more apparent as the space becomes filled. For example, if you have a birth rate of 1000 and a frame rate of 25 frames per second, you would normally expect to see 1000 particles after 25 frames. But the circle packer may (almost certainly will) have to delete some of them, so you may end up with far fewer. For this reason, to pack a space in reasonable time may require that you increase the birth rate substantially.

You can use any modifier with these particles but of course anything which changes the particle scale or speed will destroy the pattern created.

Note that killing particles with a Kill modifier or Particle Life modifier or action will NOT result in new circles being generated to fill the resulting gap.

You can render the result by using the X-Particles material in the usual way, which will render the particles as spheres - which is ideal for this purpose. Or you can use geometry from a Generator or Sprite object. If you do that, the best results will be obtained if you use a sphere as the object to be generated (or you can generate a circle spline if desired). If you use anything non-circular some of the generated objects will overlap.

Note that if using a Generator or Sprite object you should set the 'Scale Using' parameter in these objects to 'Particle Radius' or you will not see any effect from the circle packer.