This action will let you change any custom data you may have added to particles. It can either affect particles directly, or by changing a Custom Data modifier in the scene. For more information about custom particle data, see the Custom Data page. 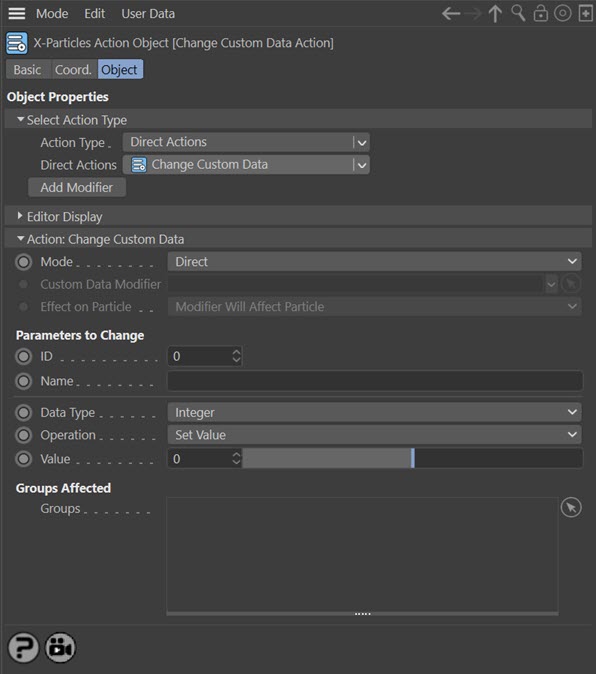 The Action will directly alter the particle custom data. It does NOT require a Custom Data modifier. This lets you change the data at a precise point without having to work indirectly through a modifier, which can be a little convoluted for such a simple alteration. However, one potential disadvantage is that using this method will cause an abrupt change in the data, rather than the smooth change you can achieve with a modifier as the particle passes through the field of the effect.

In this case the Action will let you control the operation of a Custom Data modifier in the scene.

This field accepts a Custom Data modifier which you drag into the field from the Object Manager. Without a linked modifier, you cannot access any of the other parameters and the Action will have no effect. In addition, in the modifier's interface the Mode parameter MUST be set to 'Action-Controlled'. If it is set to 'Independent' the modifier will simply work on its own like any of the standard Cinema 4D modifiers and the Action will have no effect on it.

The type of data in the custom data item. Can be one of:

More detail can be found on the Custom Data page.

This drop-down menu controls what the action will do with the custom data. It is not available for custom data of the string type; for strings, the action will simply replace the current string with the one from the 'String' field. The menu has two options:

The custom data is changed to the value in the 'Value' setting.

For floats, integers, matrices and vectors the custom data will be changed (or added to) to this value.

If 'Data Type' is set to 'String', the 'Value' field is not shown and this field appears instead.

If 'Data Type' is set to 'Time', the 'Value' field is not shown and this field appears instead. The custom data will be changed (or added to) to this value.