This modifier causes particles to flow over the surface of an object.

Note: due to the way this modifier works, you cannot render a single frame to the picture viewer. If you need to render a frame, you must render the entire sequence up to and including that frame. The best solution to this is to cache the scene; then you can render one frame, and this may well be much faster than rendering a frame sequence (depending on your scene, of course).

If you experience problems with axis flipping when particles move over a surface, see the emitter's extended data tab 'Up Vector' rotation mode. 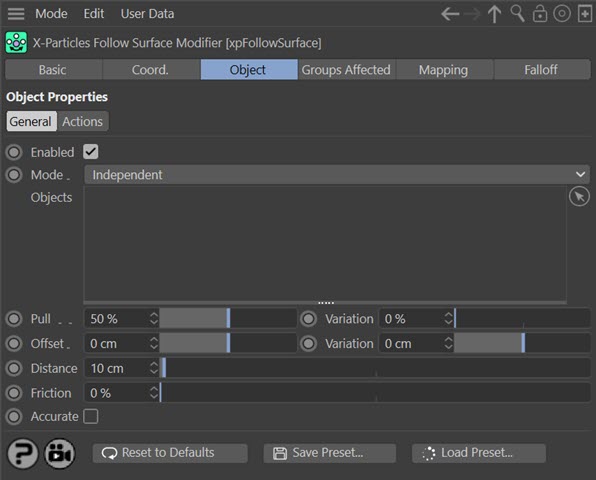 Drag the objects the particles are to move over into this list.

The Pull is the strength with which the particle is pulled to the surface. A high pull will cause the particles to snap to the surface when they are within the value in the 'Distance' setting from the target. A low Pull will attract the particles very softly. You can vary this with the 'Variation' setting.

The particles will be offset from the surface by the value in this setting, which is useful to reduce interpenetration by particle geometry. You can vary this with the 'Variation' setting.

The particle's distance from the surface must be equal to or less than this value before it is affected by the modifier.

This setting will reduce the particle speed over the surface and eventually bring it to a halt.

Turning this switch on may in some cases improve the accuracy of movement over a complex surface, but at the expense of increased computation time. 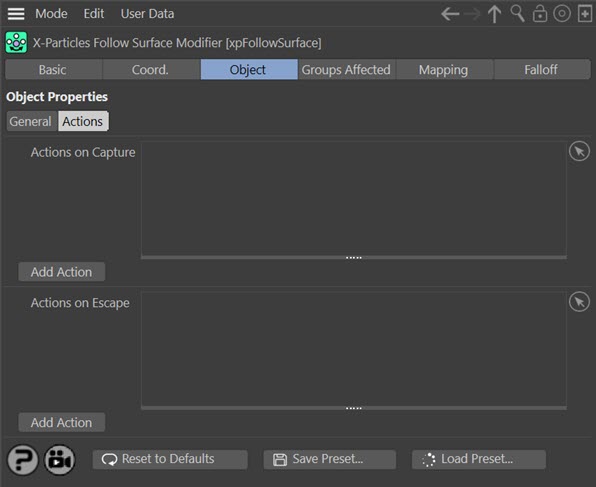 Actions dragged into this list will be executed when a particle is captured by the modifier and pulled to the object's surface.

Actions dragged into this list will be executed when a particle is escapes from the modifier's field or if it moves too far from the object's surface to be affected by the modifier.

Clicking either button will add an action to the scene and drop it into the appropriate Actions list.