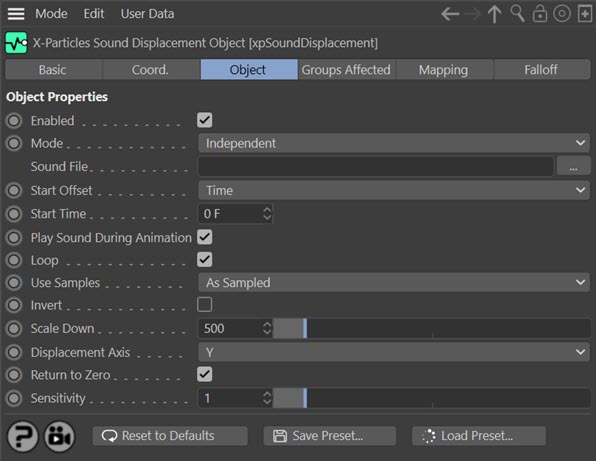 This is the sound file which will drive the emitter. It must be a .WAV file; no other formats are supported.

By default, the sound file will be used by the modifier from the start of the file, but this can be changed. The drop-down menu has two options:

Each particle will start sampling at a random point in the sound file.

If this switch is checked, the sound file will be played when animating the scene. Note that the file always starts playing from the beginning, and is not affected by the 'Offset' and 'Start Time' settings.

The sound file is sampled so that the results returned are in the range -32768 to 32768. This drop-down menu controls what is done with these values:

The sample value is used so that a positive value gives a displacement along the positive axis, a negative value along the negative axis.

All values are converted to positive ones, so displacement is always along the positive axis.

If checked, this switch simply inverts the direction of the displacement.

As indicated above, the possible result from sampling the sound file has a wide range - -32768 to 32768. This is potentially far too large to use to displace the particle, so the value needs to be scaled down first. This value is the scaling factor. Increasing it will reduce the amount of displacement.

This drop-down controls which axis the displacement occurs along. In practice Y and X usually give the best results.

If the sound file, when sampled, returns a value of zero (or a very small value) the particle position on the affected axis will be returned to its original starting position, if this switch is checked. This isn't always necessary, but in almost all cases you will want to leave this switch checked and adjust the 'Sensitivity' value for the desired result.

if 'Return to Zero' is checked, this setting controls how small the absolute value of the sampled sound value must be before the particle position returns to zero. The lower this value, the smaller the sound sample must be before returning to zero. The lower you set this value, the less likely the displacement will return to zero. Altering this value may have significant effects on the result, so some trial and error is necessary to find the best effect, in conjunction with the 'Scale Down' setting.