This tag forms part of the collision engine used in X-Particles. In order to test for collision between a particle and a scene object, the scene object must have an instance of this tag attached to it.

Particles can collide with splines as well as polygon objects. You don't need to add any geometry, just a primitive or editable spline itself is sufficient.

The tag has the following tabs and sections: 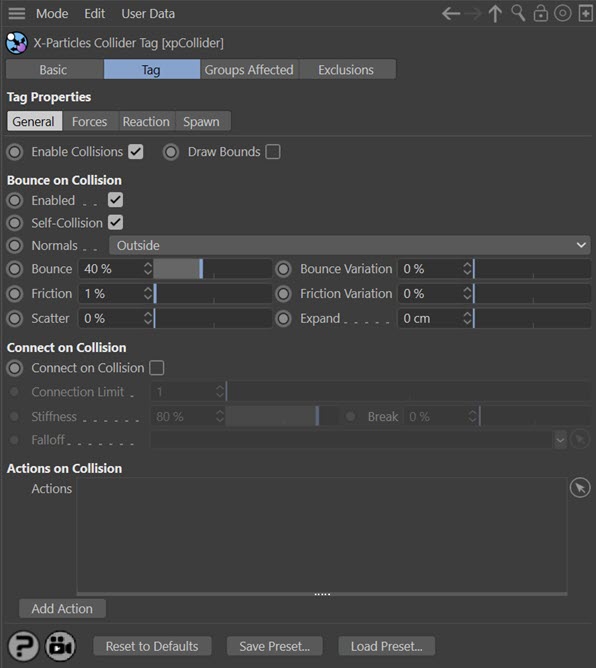 If this switch is unchecked, the object to which the tag is attached will not be checked for collisions with any particles.

The collision engine in this version of X-Particles uses adaptive bounds for the collisions. Essentially, instead of testing every polygon in an object to see if a particle is colliding with it, the engine only tests relevant areas of the mesh by dividing the mesh into smaller and smaller boxes until the area containing the correct polygon is found. This makes for much faster collisions than in previous versions.

if you wish, you can show the adaptive boxes as they are created by checking this switch. This can be useful if you have multiple colliders and you aren't sure if particles are colliding with one of them.

Here is an example using particles colliding with a Landscape object. You can see clearly where the collisions are occurring:

This option is used when emitting from an object which has a collider tag attached to it. If the switch is checked (the default setting) then the emitted particles will collide with the object from which they are emitted. If it is unchecked, they will not collide with it.

This is useful, for example, when you want to attach a collider tag to an xpCloth object. Unchecking this switch will prevent the particles which are emitted from the cloth object from colliding with the cloth and stopping the simulation from working correctly. Other particles of course will still collide with the cloth.

Normals on objects tend to point outside of the object, so the interior of the object should be the opposite direction of the normal. This is Outside. Any particle found 'inside' the object (by using the normals) is pushed out.

However, sometimes you want to keep particles inside the objects (e.g. particles in a cube); this is Inside.

If you just want to take your chances and ignore the inside/outside and just go for the particle hitting the polygons, then this is Any (which tends to leak more easily!).

The bounce controls the speed with which the particle will rebound from the object. A bounce of 100% means that the speed after hitting the object is the same as before hitting it.

These settings add friction between the particle and colliding surface. Suppose you have a scenario in which particle fall onto a surface (perhaps under the influence of a Gravity modifier). They bounce, fall back and bounce again, until they simply roll along over the surface. They will do that until they fall off the object or until the scene ends.

Friction will cause the rolling particles to come to a halt. The higher the setting, the more quickly they stop. You can add some random variation to the amount of friction with the 'Friction Variation' setting.

When bouncing from flat surface, the particles will rebound at a reflected angle which is correct for the angle at which the particle strikes the surface. For example, if the particle hits the surface at an angle of 90 degrees to it, the particle will bounce back in a direction which is the exact reverse of its original course.

This is geometrically correct but not necessarily realistic. 'Scatter' does exactly that - causes a degree or spread or scatter when the particle stream rebounds from a surface.

The distance between the particle and the collider object at which the collision occurs is determined by the particle radius. This is not always appropriate for some surfaces - the particle may get too close to the surface before colliding. The 'Expand' setting is used to increase the collision radius and can therefore be applied on a per-object basis.

This setting will only appear if the tag is attached to a spline object.

Particles can now collide with splines without needing to create geometry to detect collisions. This setting is the distance around the spline where collisions will occur. If the particle is farther away from the spline than this distance, there will be no collision.

If this switch is checked, connections may be made between the particle and the collider object. Bear in mind that you may not see any if the nature of the collisions, friction, bounce, etc. mean that the connection can never be made, or breaks immediately it is made.

The maximum number of connections a particle may make to a collider object.

This controls how "strong" the connection effect is.

Dragging a vertex map into this field will alter the connection stiffness. Maximum stiffness will apply where the vertex weight is 100%, and will not apply at all if the weight is zero.

You can drag one or more Actions into this list and those Actions will be carried out on each particle when it collides with the object. You can use any Action you like. Note that the Action you use does NOT have to be associated with a Question. The Action is triggered directly by the collision - in effect, the collision event acts as a question which triggers an Action.

Please note: due to the way the collision engine works, any action which changes the speed of the particle will have no effect. Although the particle speed will change internally, the change is then negated by the collision bounce. Only the speed is affected; all other actions should work as expected. You can still modify the speed on collision by using a Speed modifier instead of an action. Set the modifier to be action-controlled then add an action to enable the modifier for a particle when it collides.

This represents an attraction force between the particle and the collider. You can set the force in the 'Attraction' parameter. The particle must be as close or closer to the collider object than the value given in the 'Radius' setting before the force will have any effect.

This represents a repulsion force between the particle and the collider. You can set the force in the 'Repulsion' parameter. The particle must be as close or closer to the collider object than the value given in the 'Radius' setting before the force will have any effect.

By default particles are attracted to (or repulsed from) the whole mesh, subject to the 'Radius' settings. If you want the force to apply to only part of the mesh, drag a vertex map into the Falloff link field. Maximum force will apply where the vertex weight is 100%, and will not apply at all if the weight is zero.

The objects the particle collides with is unaffected by the collision.

The colliding object can be given an initial velocity on the X, Y, or Z axes with this control.

This is the mass of the object, the lower the mass the more effect 'Translate' mode has on particle collision.

If you add a Collider tag to an object and set 'Reaction' to 'Translate' you may find that, if you move the object and the play the scene, the object jumps back to the position it was in before it was moved. To fix the initial position of the object, click 'Set Rest State'. To move an object to its initial (rest) state, click 'To Rest State'. 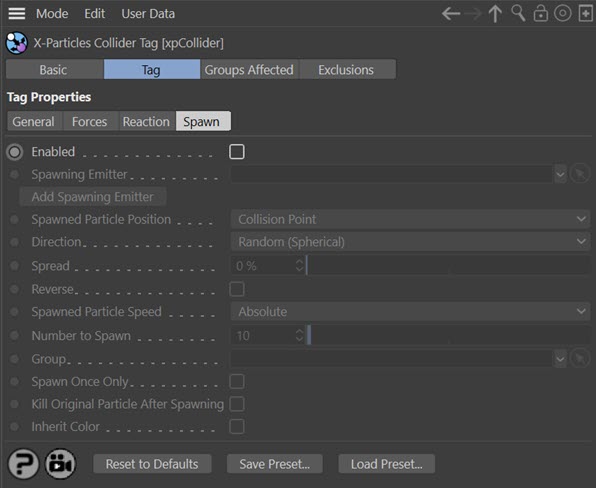 This switch must be checked before spawning takes place.

Drag an emitter into this field; this emitter will be used to generate the new particles. As explained in the Spawn modifier page, it is NOT a good idea to use the same emitter which is producing the particles which collide and trigger the spawning. Use a different emitter instead. When you drag an emitter into this field, the 'Emission Mode' setting in that emitter will automatically be set to 'Controlled Only'. You can change that setting manually if you really need to.

Click this button to create a new emitter and add it to the 'Spawning Emitter' field.

This drop-down determines where the particle will be emitted. It has two choices:

This is how the direction of the spawned particles is determined. It is only available if 'Spawned particle position' is set to 'Collision point'. The collision engine page gives more details, especially on the difference between 'Source particle' and 'Face normal' directions. There are three options:

In this mode the direction of the new particle is the same as the source particle (but can be modified by the Spread and Reverse settings - see below).

In this mode the direction of the new particles is along the normal of the face the source particle collided with. The direction can be modified by the Spread and Reverse settings - see below.

These parameters are only available if the 'Spawned Particle Position' is set to Collision Point' and the 'Direction' parameter is set to 'Source Particle' or 'Face Normal'.

The Reverse setting, if checked, will reverse the direction of the spawned particles so that instead of following along the path of the source particle they head directly away from it (useful for rocket trails, for example).

With this option, the spawned particles will have the speed given in the spawning emitter.

This is the number of particles to be spawned from the source particle.

If this switch is on, the tag will only spawn once from a specific particle. The reason for this to prevent multiple spawning from a particle which is repeatedly colliding with the collider object, for example, under the influence of a gravity modifier.

The spawned particles will inherit the colour of the source particle.

By default, the collider tag will look for collisions with particles emitted from all the emitters in the scene. It might happen that you don't want to detect collisions with particles from a particular emitter, but you do want that emitter's particles to collide with other objects (so you can't simply disable collisions in the tag or the emitter). Alternatively, you might want to specify that only certain emitters will collide with this object. You can use this tab to do either of these actions.

This drop-down has two options:

In that mode drag the emitter(s) into this list and then collisions will not be detected for this object and any emitters in this list.

This is the opposite of 'Exclude': only particles from emitters in this list will collide with the object. With all other emitters, no collisions will take place.

The list of emitters to exclude from or include in collisions. (Note: this was labelled 'Exclude From Collision' in earlier versions of X-Particles.)