This action either lets you change the group number of a particle directly, or gives control over a Change Group modifier. Since groups can now control other particle parameters such as colour, you can also select which of these parameters should also be changed when changing a group. 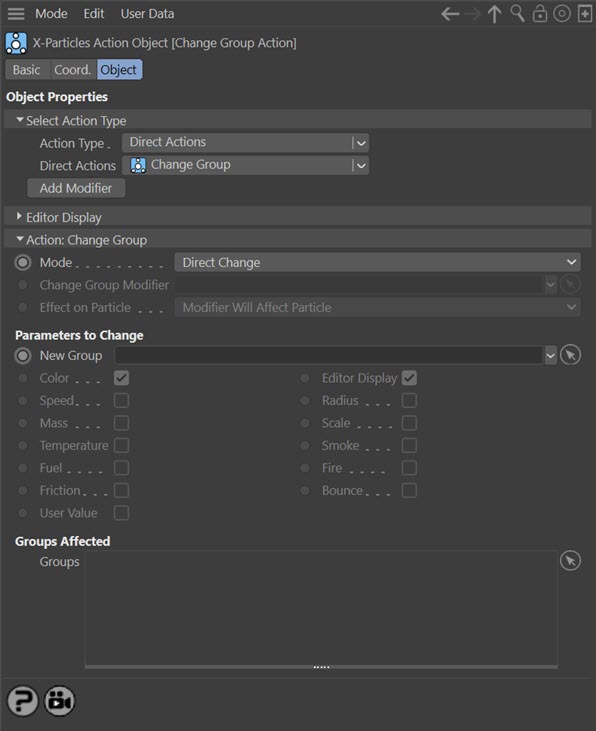 The Action will change the particle group directly. It does NOT require a Change Group modifier.

In this case the Action will let you control the operation of a Change Group modifier in the scene.

This field accepts a Change Group modifier which you drag into the field from the Object Manager. Without a linked modifier, you cannot access any of the other parameters and the Action will have no effect. In addition, in the modifier's interface the Mode parameter MUST be set to 'Action-Controlled'. If it is set to 'Independent' the modifier will simply work on its own like any of the standard Cinema 4D modifiers and the Action will have no effect on it.

Drag the new group the particle will have into this field. If this field is empty, the action will have no effect.

Changing a group simply tells the particle engine which group a particle belongs to. But it does not change any other particle settings unless one or more of the switches in this action are checked. So for example, if you check Speed and Color, when the group changes the particle's speed and colour will be changed to the default settings given in the group's interface. If none of the options are checked, only the internal group number is changed (which may affect which modifiers work on the particle, for example).

These settings can all be checked or unchecked independently. For any checked setting, when the particle group is changed the particle will change those settings to the default setting of the new group.

These are the settings from the 'Physical' tab of the new group. As with the other settings they can all be checked or unchecked independently.