This action gives you control over a Sheeter object in the scene. Specifically, it lets you enable or disable the sheeting effect of the object on specific particles. 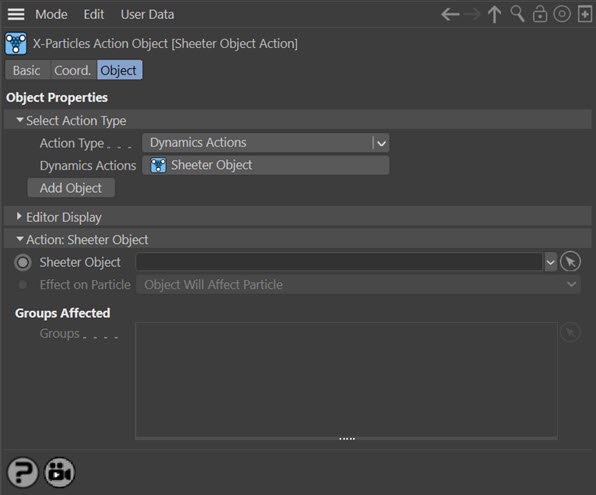 This field accepts a Sheeter object which you drag into the field from the Object Manager. Without a linked object, you cannot access any of the other parameters and the Action will have no effect. In addition, in the object's interface the Mode parameter MUST be set to 'Action-Controlled'. If it is set to 'Independent' the object will simply work on its own and the Action will have no effect on it.

In this mode the object will start to influence the particular particle which is affected by this Action. Once the particle is influenced by the object, that influence will continue until the effect is turned off (e.g. by another Action).

Note that whether the object actually has any effect on the particle will depend on the object's parameters and especially on its falloff. Even if the object is set to affect a particle, it may have no effect on it if the particle never enters the field of effect of the object.

Object Will NOT Affect Particle

In this mode, the object's influence on the particle will be turned off and the object will never affect the particle, unless it is turned back on again (e.g. by another Action).