In addition, rather than just popping particles in and out the modifier can fade them in or out over time by altering the particle radius. One that reaches zero, the particle is deleted.

The purpose of the modifier is to allow additional 'filler' particles to be added to a scene when needed, then removed when no longer required. 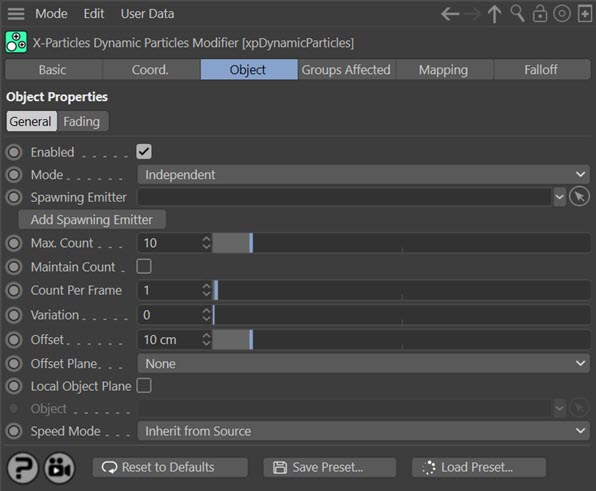 Click this button to create an emitter and add it to the 'Spawning Emitter' field.

The maximum number of dynamic particles which can be generated per source particle. They will be generated at a rate found in the 'Count per Frame' parameter until the maximum is reached.

You can keyframe this value to remove the dynamic particles when no longer required.

In the previous version of this modifier, particles would fade in then, as the 'Max. Count' was reduced by keyframing, fade out again until there were none left. By checking this switch, the number of particles (up to that specified in 'Max. Count') will be maintained so that as old particles fade out, new ones are created.

Using 'Maintain Count' in conjunction with 'Auto Fade' enables simulations such as this:

The 'Variation' setting can be used to add some variation to the count per frame for different source particles.

When generated, each dynamic particle will be positioned at a distance from the source object of between 0 scene units and this value.

This is the plane in which the dynamic particles will be placed. There are four options:

The particles are not restricted to any plane, so they will adopt a spherical distribution around the source particle.

The dynamic particles will be restricted to the selected plane. Note: this is a global (3D world) plane. To use a plane local to an object, see 'Local Object Plane' below.

Check this switch for the offset plane to be local to an object rather than global.

The object whose plane will be used if 'Local Object Plane' is checked. You can use the source particle emitter if you have rotated it and want the dynamic particles to conform to its plane.

This determines the speed of the dynamic particles. There are two options:

The dynamic particles have the same speed as the source particle.

The dynamic particles' speed is set by the spawning emitter. 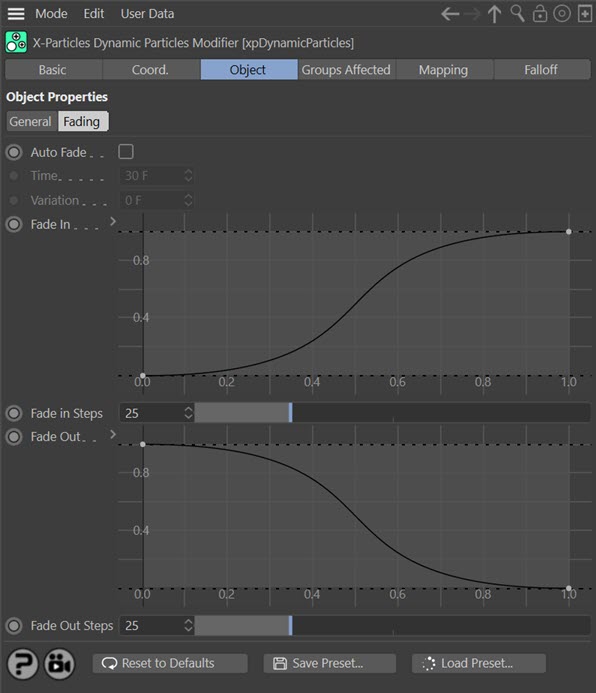 These splines control how particles are faded in when generated or out when removed. Fading in/out is done by altering the particle radius. For example, with the default 'Fade In' spline, the radius will start at zero and be 100% of the source particle radius by the time the fade in is complete. The time taken is given by the 'Steps' setting where each step represents one frame.

Conversely the default 'Fade Out' spline reduces the radius from 100% to zero over 'Steps' frames. When the radius reaches zero the dynamic particle is automatically deleted.

In the previous version of this modifier, to make a particle fade out it was necessary to keyframe the 'Max. Count' setting to reduce the number of dynamic particles. Excess particles were then faded out using the 'Fade Out' spline and 'Fade Out Steps' settings.

The 'Auto Fade' switch makes this unnecessary. You no longer need to keyframe 'Max. Count'. Instead, check this switch. Particles will now fade in over the time given in the 'Time' setting (together with any variation) then fade out again over the same time. Note that, if 'Time' is less than the fade in or out steps values, the particles may not reach their maximum radius before fading out again. If 'Time' is greater than the steps values, the particles may stay at their maximum radius until the time has elapsed, and then begin fading.

If you have checked the 'Maintain Count' switch in the 'General' tab, as particles fade out and die, new ones will be created to replace them.

The time over which a particle fades in and out, if 'Auto Fade' is checked.

A variation setting to be added to 'Time'. This ensures that particles don't all fade in and out at the same rate.

Fade In, Fade in Steps

The spline to control fading in of new particles.

Fade Out, Fade Out Steps

The spline to control fading out of existing dynamic particles.