Large scenes with many actions, modifiers, questions, etc. can become very confusing. To keep things tidy, the System object adds several 'folder' objects which are really just null objects with a specific icon. These are intended to group together the various objects in an X-Particles scene.

These section headers are discussed in the System Object page. Each folder can add one or more sub-folders as child objects of itself. This is so that, if you have multiple actions or modifiers of a particular type, you can drop them in their own sub-folder to make them easier to find.

Note: context-sensitive help is not available for these objects. 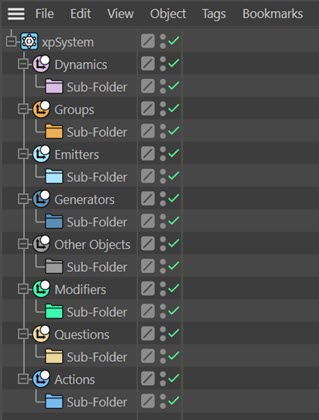 To add a sub-folder, click the 'Create Sub-Folder' button in the folder object. For example, in the Generators folder:

This will create a subfolder of the correct type as a child of the Generators folder. You can set the name of the sub-folder in the 'Folder Name' field before you create it, or change it afterwards in the object manager in the usual way. You can create as many sub-folders as you need.

The Dynamics Folder has an extra control like so:

If you drag a spline or object into the 'Cloth Object' link field, then choose 'Create Cloth' from the drop-down menu, all the necessary objects needed for the Cloth FX system will be created and placed into the correct locations.

Each sub-folder type has its own coloured icon. If you want to, you can change the icon to something more distinctive. To do this, click the 'Change Icon' button in the sub-folder interface:

This will bring up a standard file selector box. The replacement icon MUST be a 32x32 graphic loaded from disk. Any other image will simply result in a blank space where the icon should be. To change the icon back to its default, click the 'Reset Icon' button.

Most folders can add relevant X-Particles objects to the scene in exactly the same way as the System object does. Some have the same drop-down menus found in the System object, some (such as the Emitters folder) only have a button to add that specific object. The exception is the Questions folder, since Question objects can only be added from an emitter.

To add one of these objects, click the small arrow to the right of each button in case of a drop-down, which will bring up a list from which you can select the desired object.