This modifier causes the particle stream to follow a path which is controlled by a sequence of path objects.

Please also see the manual page for the Path Data Tag, which adds additional functionality to this modifier. 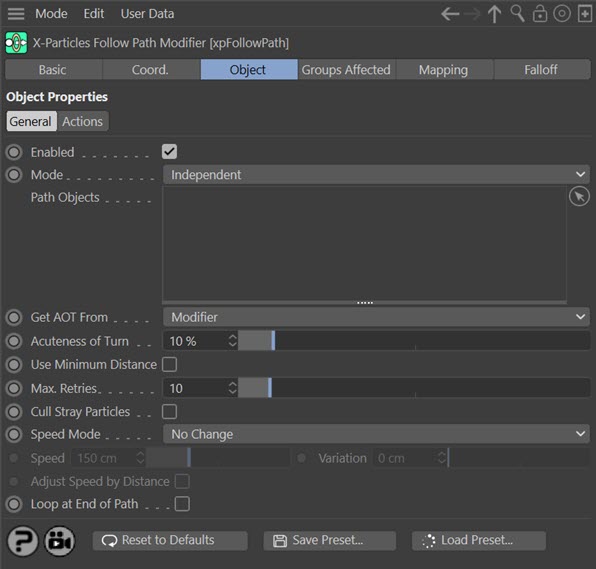 These objects set out the path the particle stream will follow. The stream will move to each object in the list in the order they are found there.

Each path object must have the following requirements:

The modifier can also use a Mograph Cloner as the path object. Simply make a spline the child of a Cloner then drop the Cloner into the 'Path Objects' list. You can then use effectors to alter the position, scale, etc. of the clones and even animate them!

Open splines will not work at all; non-coplanar splines may work but the result is unpredictable. (Coplanar means that all the points of the spline lie on the same plane, but that can be any arbitrary plane.)

If your path objects are spline primitives which lie on the XY plane (the default setting) you will meet these requirements but for custom splines you must ensure that this is the case.

Splines which can be used include Circle, Rectangle, Star, Flower, etc., but not Helix, Arc, Formula and so on. Some (such as Arc) will work if you make it editable and close the spline. Helix can never work because it is never coplanar.

For each path object, when the particles turn to head towards it the sharpness of the turn is governed by the 'Acuteness of Turn' setting (AOT). In many cases you can use the same AOT setting for all the path objects, but it may be that for some objects you want a less or more acute turn. In that case, you can assign a Path Data tag to the object and set the AOT in the tag. This way, all the path objects can have different AOT settings if required.

The drop-down has two options:

The acuteness of turn will be obtained from the modifier 'Acuteness of Turn' setting for all path objects, even if they have a Path Data tag.

If the object has a Path Data tag, the acuteness of turn will be obtained from the tag. If an object has no tag, the AOT setting in the modifier will be used.

This value controls how sharply the particle will turn to head for the next object. If it is too low, the particle may not reach the object in time, in which case it will circle back to try again. This setting is used if 'Get AOT From' is set to 'Modifier' or if it is set to 'Tag' and a path object does not have a Path Data tag.

When the modifier directs a particle to the first spline in the list of path objects, it has to calculate a position to head for. To do this, it simply selects a random position within the space enclosed by the spline. This often results in particles moving from one side of the path object to the other, crossing other particles, which is especially noticeable if the particles are producing trails.

Checking this switch will reduce the crossover by forcing the modifier to find the shortest distance from the particle to a point in the spline area. The accuracy with which it does so can be improved by increasing the 'Max. Retries' value.

The switch is off by default to maintain compatibility with existing scenes. It works best if the particle stream is at right angles to the plane of the spline object. If the stream is parallel to the spline plane you may see all the particles heading for the same point in the spline area. If this happens, you can turn off this switch and accept the possibility of trails crossing each other.

If no target position is found after the maximum retry count is reached, the particle will no longer follow the path and will simply continue travelling along its current direction. You can kill these stray particles with the 'Cull Stray Particles' switch.

If the 'Use Minimum Distance' switch is checked, the modifier will try to find the nearest point in the spline area to the current particle position. It will do that for however many tries are given in this parameter.

If checked, particles which have not been assigned a target position inside a path object will be removed (see 'Max. Retries' above).

This setting determines the particle speed between path objects. It has the following options:

The particle maintains its current speed.

The particle speed is set from the value in the 'Speed' setting (with added variation, if any).

Get Speed From Tag

Only available in 'Set Speed' mode to set the particle speed. Variation in the speed can be added using the 'Variation' setting.

Only available in 'Set Speed' mode. When the particle stream turns to point to the next path object, they will all move at the same speed but particles on the outside of the curve will take longer to get there than those on the inside. Checking this switch will reduce that discrepancy by adjusting the speed to take account of the distance to be travelled.

If you choose 'Get Speed From Tag' the same setting is also available in the Path Data tag.

Loop at End of Path

If this switch is checked, when the particles have passed through the last path object, they will return to the first object and move along the path again. If it is unchecked they will simply follow the direction they had on exiting the path.

Actions dragged into these lists will be executed when a particle enters the first path object or reaches the end of the path (i.e. passes the final path object).

Clicking either button will add an action to the scene and drop it into the relevant Actions list.

The lists of actions to be carried out at the start and end of travel along the path.