This tab controls the use and creation of particle groups by this emitter. 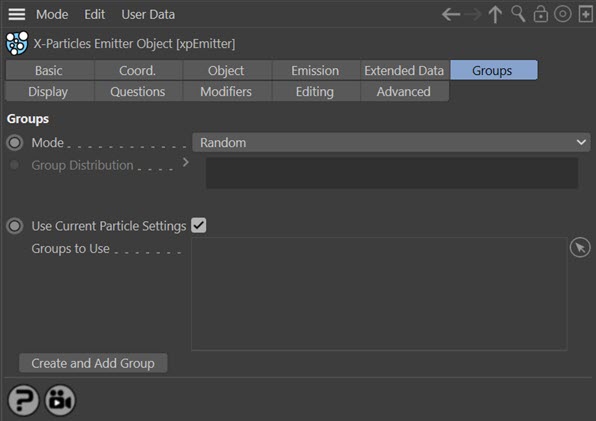 It is possible to assign particles to different groups. This is useful because you can use a Question object to test whether a particle is in (or not in) a group, and trigger an Action for that group, or determine which particles are affected by a particular modifier.

When particles are created they are assigned randomly to one of the groups in the 'Groups to Use' list.

The first particle is assigned to the first group in the list, the second particle to the second group, and so on. When the end of the list is reached, it wraps around to the beginning of the list again.

You can use a gradient to control the distribution of groups. Click the little arrow next to the 'Mode' drop-down to reveal the gradient to use.

Causes the emitter to emit particles in the first group only, if there is one. The reason for this is so that you can create groups associated with this emitter and then switch between them. Otherwise the emitter would create particles belonging to all the groups.

The gradient used to distribute particles between groups in 'Use Gradient' mode. 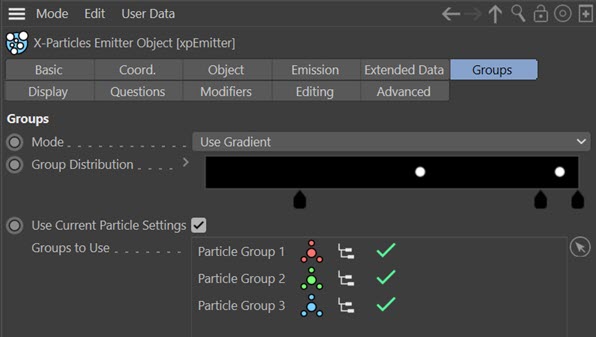 The colours in the gradient are not relevant - what matters are the positions of the knots. You need one knot per group. The emitter will handle the situations of too many or too few knots gracefully though; if it can't determine what group to use it puts the particle in the default group.

If this switch is checked, any group created with the 'Create and Add Group' button will have the same settings as in this emitter - that is, same colour, speed, radius, etc. If it is unchecked the new group will use the default particle settings found in the X-Particles Preferences.

Note: if the 'Random Color on Creation' switched is checked in the main X-Particles preferences, each group will have a random colour when created. This will override the colour specified in the emitter and in the main preferences. Turn that switch off if you don't like this behaviour.

Drag the Particle Group objects you want to use into this list. If no groups are present in the list, all particles will be in the default group 0 (zero) and will have the settings found in the 'Particle Display' tab. If more than one group is in the list, new particles will be assigned randomly or sequentially to one of the groups, depending on the 'Mode' setting. They will then take their appearance from the group they are in.

The 'Groups to Use' list supports the green tick/red cross switch: if the switch is set to a red cross, that group will not be emitted by the emitter. The use hierarchy switch is also supported, if it is enabled the emitter will emit that group and child groups it has.

Clicking this button will automatically create a new Group object and insert it into this list. This is exactly the same - but more convenient - as going to the X-Particles menu and clicking on the xpGroup object in the 'Other objects' sub-menu.