This modifier will change particle direction to avoid other objects in the scene.

In this version splines, including X-Particles Trail objects, have been added to the list of objects which can be avoided. 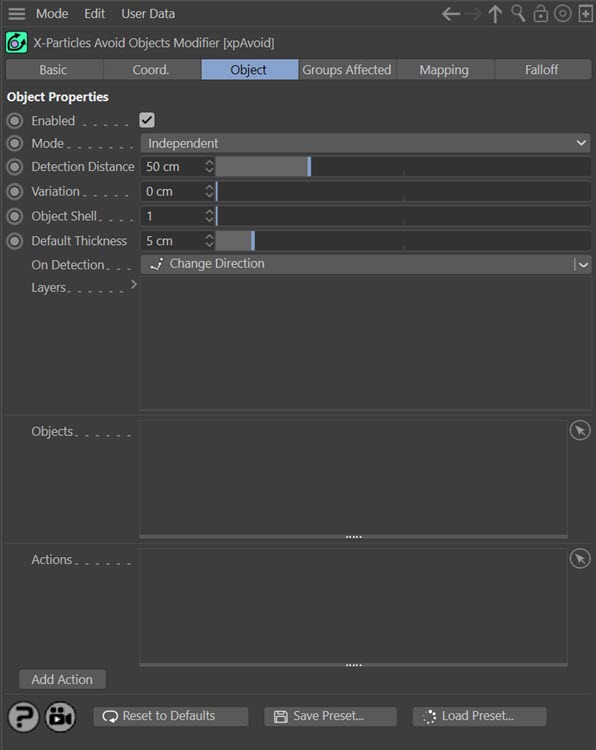 Applies some random variation to the 'Detection Distance' so that the particles don't all start to avoid the object at the same time.

This setting has two uses. If the object is a spline, this is the 'thickness' given to the spline. A spline has zero thickness, so there is nothing to collide with; in that case, the spline has to be given an assumed thickness (imagine a virtual cylinder around the spline) to provide a collision object.

If the object is an X-Particles Trail object, as opposed to a conventional spine, its thickness comes from the 'Thickness and Color' tab of the Trail object. That tab can do three things:

But it has another use. If a particle is trying to avoid its own Trail object, the problem is that the trail has the virtual 'cylinder' around it. This means that if you test for intersections from the particle position, it will hit the cylinder around itself and register an instant hit, which is clearly incorrect. If it tries to change direction at that point, it won't be able to because the 'cylinder' completely surrounds it, so it fails to determine a suitable new direction and simply stops. The only way around this is to advance the starting position along its direction of travel until the starting position is 'outside' the virtual cylinder.

But how far should it be advanced? An arbitrary value won't work, since the trail thickness could be set to any value. Instead the 'Default Thickness' value is used. This will advance the start position of the ray by that distance along the direction of travel,

In this case we strongly recommend that, if you are using this modifier to avoid a particle's own trail, that you check the switch 'No Thickness or Color Data' in the Trail object. This will then ignore all thickness data from the Trail object and use only the value in this setting.

This menu enables you to choose what the particle will do when it detects a possible collision with an object from the 'Objects' list. There are four possible options:

The particle will change direction to avoid the object.

The particle will freeze. It can be unfrozen again using an Action or the Negate modifier.

The particle will be killed. Unlike freezing, this cannot be reversed later.

The particle will trigger any actions in the 'Actions' list.

For convenience, when you add a 'Trigger Actions' layer, a new action will be created and added to the 'Actions' list.

Using this menu will add the selected option to the 'Layers' list. You can add more than one entry to the Layers list if required.

This is the list of options that will be carried out when a potential collision with an object from the 'Objects' list. It can contain more than one entry. For example, this list will first change the particle direction then trigger any actions in the 'Actions' list:

You can remove options by right-clicking an entry and selecting 'Remove' or 'Remove All'. You can also disable any entry temporarily by unchecking the checkbox at the left of the entry, like this, where the 'Change Direction' entry is disabled:

Note that you can only have one entry of the same type.

The order of these entries is not relevant, and in fact, you cannot change the order. They are always carried out in this order, if present in the list:

Drag the objects you want the particle to avoid into this list. You can add any kind of polygon object, or an object that would be a polygon object if it was made editable (e.g. object primitives, C4D generator objects, the Mograph cloner, etc.) or a spline object, including an X-Particles Trail object.

Objects without polygons and which are not splines (e.g. cameras, lights, etc.) will have no effect.

This is a list of actions which will be triggered when a potential collision with an object from the 'Objects' list is detected.

These actions will ONLY be triggered if the 'Layers' list contains a 'Trigger Actions' entry.

Click this button to create a new button and add it to the 'Actions' list. When you click this button, if there is not already a 'Trigger Actions' layer in the list, one will be created. This is simply for convenience, since presumably if you create an action you want it to be triggered.